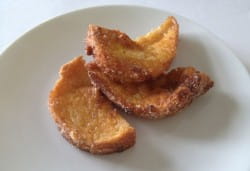 Having been in Portugal for three days this week it’s no surprise that my top match this week is a port but the food pairing is surprisingly simple and delicious.