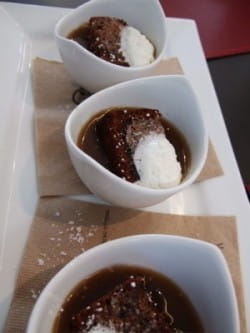 One of the most impressive aspects of my visit to Toronto last week was the fact that almost every restaurant suggested a well chosen wine pairing against the dishes they served. Here are the ones that stood out for me:

Canoe ‘raw bar’ with Charles Baker Picone Vineyard Riesling 2007, Vinemount Ridge Ontario
Canoe’s ‘raw bar’ is by no means a standard seafood platter but full of inventive twists which made the choice of this delicious crisp, minerally riesling quite perfect. Standout components were some stunning oysters, scallop ceviche with horseradish, tuna tartare with pickled daikon, lobster with buckwheat noodles and cured sardines served ceviche style with a spiced apple confit

Yucatan Hot and Sour Soup with Fenwick Farms Smoked Chicken and Goji Berries with Thirty Bench Small Lot Riesling 2007 (Nota Bene)
Soup is notoriously difficult to pair, a spiced broth even more so but this partnership with an off-dry appley riesling (also paired successfully with Grilled Jail Island ocean trout with a rice paper roll of microgreens and herbs at Annona) was spot on.

Crisp Quebec sumac-dusted duck salad with green papaya slaw with Fielding Estate riesling (Nota Bene)
I’ve already picked this out as my match of the week. A stunning combination of a zesty Asian-inspired salad with a crisp citrussy riesling.

Butter-poached Nova Scotia lobster with cauliflower pure with 2007 Norman Hardie Chardonnay from Prince Edward County (Nota Bene)
Lobster and chardonnay is of course a classic pairing and this was definitely more than the sum of its parts, the chardonnay counterpointing a wickedly rich dish, the lobster and butter sauce accentuating the elegance of the wine and highlighting its citrus character.

Northern Rainbow Trout with fingerling potato salad and herb veloutwith Reif Estate reserve Chardonnay 2006 (cooked by Dylan McLay of The Epicurean on Niagara-on-the-Lake)
It was also to be expected that this combination would work but again it was well executed. A nicely crisped salmon trout fillet with a rich, herby sauce and a touch of mustard bacon all helped mellow and refine a broad-shouldered Chardonnay.

Arctic char gravlax with Meyer lemon relish and crme fraiche with Jackson Triggs Sauvignon Blanc ‘07 (Frank at the AGO)
Potentially a difficult pairing. A powerful lemon flavour in a dish can cancel out a similar flavour in a wine but this fresh, citrussy Sauvignon held its own. (The relish was a delicious accompaniment for a gravlax - worth trying)

Red wines
Canadian reds, especially Pinot Noir still have some way to go in my opinion before they reach the level of their New World counterparts so surprisingly it was two Meritage pairings that got my vote

Charcoal BBQ Alberta Kobe with sherry consomm, green asparagus and tiny potatoes with 2006 Laughing Stock Portfolio Red, a cult Meritage blend from the Okanagan Valley in British Columbia (Annona, Park Hyatt)
Cabernet and beef is a bit of a no-brainer, of course but this dish was lighter than you might have imagined from the description and very skilfully handled.

Chili crusted venison with sweet potato pure, roasted beets, feta cram and devilled egg yolk with a 2005 Meritage Blend from Fielding Estate, Niagara (C5)
A very different Meritage pairing at C5 at the ROM (Royal Ontario Museum). A graceful wine (rather than a blockbuster) which held its own with an interesting and complex dish with cleverly balanced savoury, sweet and earthy elements

Sticky toffee pudding and Fielding Estate Ice Wine 2007 (Jamie Kennedy at the Gardiner)
I would never have thought of pairing ice wine with sticky toffee pudding which shows that you never stop learning. I would have thought it would be an over-sickly combination and that the rich hot sweet sauce would have overwhelmed the wine. Not so at all. Its terrific acidity kept its character intact and lent a refreshing citrussy edge to the combination.

Apple mascarpone trifle with Henry of Pelham 2007 Riesling Icewine (Eric Peacock of Wellington Court at Henry of Pelham)
Another great combination of a creamy, appley dessert with a lovely fresh citrussy icewine. Shrewd observation from marketing director Daniel Speck who led the tasting “A sweet wine should be more like biting into a piece of pineapple than a spoonful of honey” Spot on. 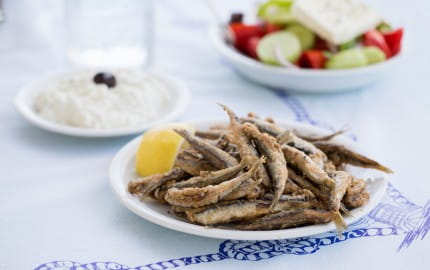