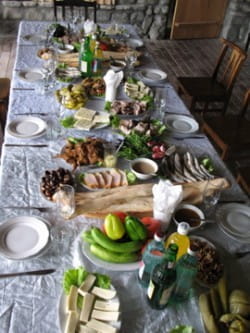 Barbecued pork, common in the Kakheti region, is best washed down with briskly crisp and tannic young dry Saperavi, Georgia's premier red grape and one worth seeking out, cleansing the rich fat and its savory quality linking with that of the smoky pork. If your Saperavi is particularly tart or tannic (a not uncommon occurrence), the addition of a bit of sour plum sauce, normally accompanying a Georgian pig-based feast, brings the level of sourness in balance again. However, if the pig has been boiled or slow-roasted you may find a 'clay jar' Rkatsiteli, Georgia's top white grape of quantity (although somewhat less so in quality) enough of an acid/tannin sweep to match the swine. (FYI clay jar, or 'qveri' wines are fermented and aged in ceramic jars buried in the ground. And for similar reasons of thrift and tradition nearly all of Georgia's food and wine are, by default, organically grown/raised/vinified.)

Carp, ubiquitous in this mountain-dominated area interspersed with rivers and lakes, is less fatty and more firm than most I've come across in Europe and North America. It's often served grilled so as to minimize what little fat is left and to ratchet up the rather plain fish's character to something just short of savory. Again, good with qveri whites when grilled, it's more typically marinated in vinegar and spices (especially coriander seeds) and best accompanied by the aromatic white wine Mtsvane or the charmingly-named Kisi in either the modern steel/oak or 'clay jar' style.

Fowl, too, has its place at the Georgian table. Grilled and salted squab and grilled, garlicky chicken are usually served at room temperature, adding to their flexibility of pairing with a blended white from the Tsinandali appellation or a fruitier, slightly chilled Saperavi. Pickled vegetables are regularly served with these type of dishes but they are not so vinegary as to impose themselves upon the wines.

Garlic and fresh coriander find their way into many dishes, sometimes even in combination, in a way that strongly reminded me of Mexican food. Over lunch at a restaurant in Kakheti's main town of Telavi which brews its own lager we were served a plate of boiled tongue with loads of each topping it. The beer did the trick with it but I thought a chilled Mtsvane would have worked just as well.

A unique harvest dish is 'tatara', a sweet made by continuously stirring a pot full of grape must and flour under a rapid boil until it reduces into thick paste. Walnut kernels, held in place by a string forced through their center, are then dipped into the paste then left to hang and dry for a few days until stiff and ready to slice. It somewhat resembles a sausage and sliced makes a nice pairing with a semi-sweet Saperavi.

'Hashi' is a morning-after cure. As with Mexico's 'birria', this is littered with strips of tripe but here the addition of garlic is left to the individual and the amount of salt is less than the south-of-the-border cure. Inevitably you'll be be served your hashi with a chilled, local grape distillate called 'chacha' which is usually surprisingly smooth and pure, a gentle 'hair of the dog'.

The wines of Georgia's Tbilvino winery are available to sample at London's Vinopolis and for purchase at the Majestic shop adjacent to it.

Cut the aubergines lengthwise, sprinkle with salt and leave for 30-40 minutes. Than squeeze them to extract the excess juice and fry in sunflower oil on both sides until browned. Allow the aubergines to cool.

To prepare the stuffing mix the finely chopped walnuts with the crushed garlic, saffron and ground coriander, season with hot pepper and wine vinegar and mix into a paste. Add the fresh coriander.

Spread the stuffing on each half of the aubergines and fold them in two. Aubergines are usually served at room temperature garnished with fresh coriander and pomegranate seeds.

Californian David Furer is the author of Wine Places (Mitchell Beazley, 2005), a contributing editor to the US restaurant magazines Sante and Sommmelier Journal and a contributor to Tom Stevenson's annual Wine Report (Dorling Kindersley) 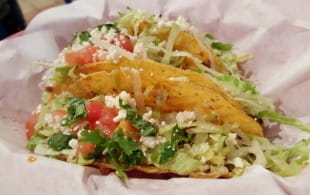 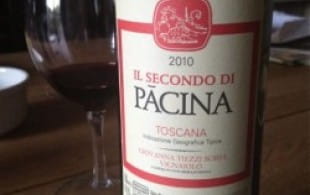 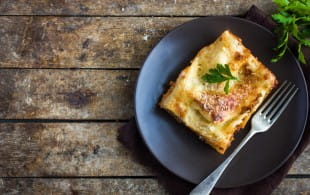