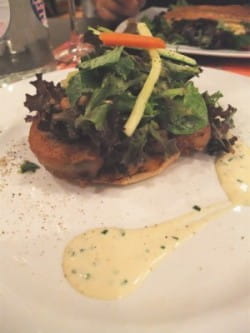 As we’d already kicked off the evening with quite an extensive tasting of natural wines (about which more later this week) we simply ordered a half bottle of a local red, a Côtes du Jura Rouge Tradition 2002 from Stéphane Tissot.

It’s the kind of wine that doesn’t go down particularly well on the British market, being light and slightly sharp but it was utterly perfect with a decadently fatty dish of tête de veau (calf’s head) served warm on a mound of sliced potato and apple, and pretty good with the equally robust stuffed brioche with mushrooms and saucisse de Morteau that preceded it. A ‘food wine’* if ever there was one.

Incidentally I’d recommend the restaurant, which has recently changed hands, as a good option if you’re ever in Besançon which is a really lovely old town. Not overpriced or stuffy (unlike some of the other restaurants we checked out) and with simple, satisfying food. We stayed in a really splendid modern B & B called La Maison du Verre which was also very good value. 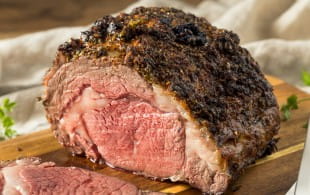