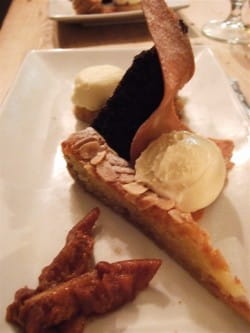 Liefmans, which is based in Belgium used to make two fruit beers - Kriek which was flavoured with cherries and Frambozen or framboise with raspberries. Now it seems to make just Liefmans which is blended with cherries and other berries and what they call Liefmans Cuvée Brut which is wrapped in the distinctive red paper.and is, so far as I can tell, the old Kriek. Either would have gone with the tart, which contains a layer of raspberry jam with an almond topping. I’ve previously matched it with Frambozen but the Kriek is equally good.

We were also served a glass of Meantime’s very chocolatey chocolate beer which went well with a number of the desserts on this highly indulgent dessert plate (right) but particularly, I thought, with a white chocolate mousse on shortbread. Something you just couldn’t pull off with wine.

The dinner was part of an all day beer experience called ‘Beer Safari’ organised by a Suffolk-based company called Food Safari and included a trip to the local Adnams brewery in Southwold. I’ll be writing more about some of the other beers and pairings I tasted later this week.

I attended the dinner as a guest of The Anchor and Food Safari. 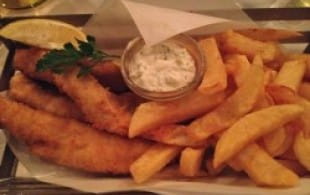 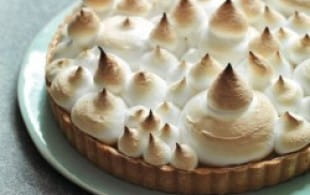