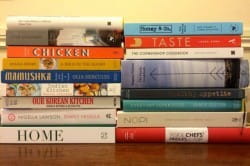 I hasten to say I’m not a baker which is maybe why the unorthodox but brilliant Honey & Co The Baking Book appeals, not least because its recipes work. I also like The Violet (I nearly wrote Violent) Bakery Cookbook by Claire Ptak. Chocolate croissant bread pudding anyone? Yup, I thought so.

For the adventurous cook

Mamushka
No need for any extra endorsement from me, this book has swept the board in almost all the 2015 book selections - and rightly. Its author, Olia Hercules, is as charming on the page as she is in person sharing family recipes (from the Ukraine) you almost certainly won’t have tried before. I’ve cooked about 4 or 5 dishes from it and all have been delicious.

Those who appreciate an encyclopaedic approach to food will love The Nordic Cookbook, the 768 page magnum opus from Magnus Nilsson of Faviken. It’s the Scandi equivalent of the Larousse Gastronomique - and frankly a bargain at £29.95 (or even less from you-know-who). Meatball obsessives will be in heaven.

If you follow Maunika Gowardhan’s mouthwatering instagram feed @cookinacurry you’ll know how good her food looks and sounds. Indian Kitchen: the secrets of Indian Home Cooking tells you exactly how to make it. Ideal for curry fanatics

And if you’ve always wanted to get your head round bibimbap, kimchi and other Korean specialities Jordan Bourke and Rejina Pyo’s Our Korean Kitchen will get you off to a cracking start.

For Hibernophiles
At least that’s the term for someone who love Ireland and all things Irish according to Wikipedia. If you know someone who falls into that category buy them Trish Deseine’s Home, a beautifully produced book that combines luscious photography with lyrical writing and some lovely recipes including this one for baked apple with porter cake crumbs and whisky custard

For the cash-strapped (or anyone who has been cleaned out by a visit to the dentist recently. *Speaks from bitter experience*.)

The Cornershop Cookbook probably wins the prize for the most delightfully left-field book of the year though I suspect not everyone has such generously stocked local shops as the authors. Good for an ambitious student cook. And given chicken is also not that expensive one of your loved ones (can't believe I'm using that term) may appreciate a copy of either A Bird in the Hand from Sunday Telegraph Cookery writer Diana Henry or Catherine Phipps Chicken: I’d say Phipps for the more cerebral cook who likes to get her/his head around techniques like making chicken brittle and Henry for the friend or family member who wants more colourful inspiration (the photography, as always with her books, is as inviting as the text).

For celebrity chef groupies
As ever there’s a book from all the big names this Christmas, from which I’d pick out four

Nopi
Even someone who has all Ottolenghi’s other books will want this one written with his head chef Ramael Scully. It looks utterly beautiful with its gleaming gold page edges too.

Simply Nigella
Nigella has come under fire for some of the recipes in her new TV series but who can complain about chicken traybake with bitter orange and fennel or tamarind-marinated bavette? A book to read as well as to cook from - Nigella on vintage form

More health-conscious friends may appreciate Gizzi Erskine’s Gizzi’s Healthy Appetite (loads of lovely recipes in this one) and Jamie Oliver's Jamie’s Everyday Super Food both written by chefs who actually enjoy their food and have retained a sense of balance about what constitutes healthy eating. (Even the clean eating brigade couldn’t complain about Jamie’s 100 calorie snack bowls. Though they probably will.)

If you’ve a chef-obsessed friend they’ll also love Carrie Solomon and Adrian Moore’s Inside Chefs’ Fridges, a compulsive read I suspect many will keep in the bathroom, infuriating family members by locking themselves in and pouring over it for hours. (You won’t be surprised Fergus Henderson has Fernet Branca in his. Fridge, not bathroom, obviously. Though possibly that too ...)

Five Quarters by Rachel Roddy
My other favourite book this year from one of the best young writers around. Very much in the Elizabeth David/Jane Grigson mould, you don't even need to cook from it to be able to taste the food and ingredients of her adopted Rome

And finally food geeks (and infographic fans) will love Laura Rowe’s Taste which gets over basic food science and culinary tips in a jazzy, snazzy way. A fun book for older, food-conscious teens.

There were many other good books published this year (Richard Turner’s Hog and Claire Thompson’s Five O’Clock Apron on feeding small kids among them) but if I don’t stop now you’ll never get to the shops in time, will you?

And let’s hope someone buys one of these for you.

Disclosure: most of these books were sent to me as review copies.