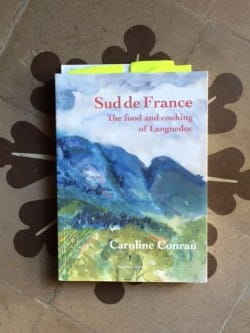 But it’s not surprising when you dip into it. As soon as I started turning the pages I resolved to make it my holiday reading. It’s rare to find such a good companion for a time and a place.

Despite the declaration that "This is not polite France, this is ‘in your face’ France” it’s a romanticised view of Languedoc which, fond though I am of it (I’ve been coming here for over 20 years), could not be described as a major food destination. Although the markets are good, one struggles to find simple unpretentious restaurants or even the independent shops to source good ingredients - the Languedoc landscape is now liberally dotted with Lidl's and Aldi's, Intermarchés, Casinos and Super U’s stuffed with ready-to-eat products.

But Sud de France will provide inspiration and the kind of food you hoped you were going to eat when you come to the region. I made 3 recipes**, all of which were great and I’ll make again though I tweaked all of them, I confess. Conran, like Elizabeth David, is a writer who assumes you know what you’re doing in the kitchen and I’m sure wouldn’t be offended if you change a recipe to your personal taste. 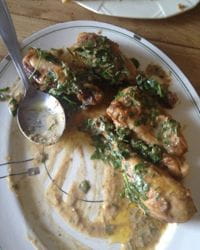 The chicken with garlic and anchovies, for example, I made with less cream than she suggested and a handful of chopped parsley which lifted the colour but it’s a brilliant combination of flavours which looks set to be a family favourite. I added finely chopped garlic and some mint to the little puffy courgette pancakes - a cheap easy dish to rustle up for a lunchtime starter or as an unusual side and used more peaches than she suggested in the gorgeous golden peach and tomato chutney (below) simply because I didn’t have enough tomatoes. All worked perfectly.

There are so many dishes I still want to make. I never got round to brandade de morue for which she gives two recipes, one from Marseilan, the other from Sète or duck with muscat, peaches and hazelnuts which will have to wait for next summer’s crop. There’s a creamy garlic soup which sounds perfectly suited to spring and early summer, a Languedoc take on a bouillabaisse and some rib-sticking winter soups such as sausage and cabbage soup and escudella which comes from the Spanish border. There are deep, savoury satisfying stews such as gardiane de taureau (bull stew) and Catalan-spiced meatballs. Doormat potatoes with garlic and potatoes with ceps. Not much in the way of desserts for the sweet-toothed but that reflects this part of France. 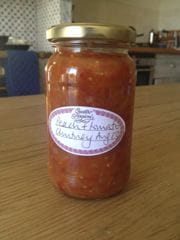 There is a truly excellent section on ingredients, The Tastes of Languedoc, about oysters and truffles. snail feasts and salt cod and what to do with leftover bread, full of anecdotes of foraging for wild herbs and game which suggests that there’s more on my doorstep than I’ve been aware of. Conran is a wonderfully lyrical writer and storyteller but like David and Jane Grigson, to whose tradition of British food writing she firmly belongs, she wears her learning lightly.

If you're holidaying in Languedoc - or elsewhere in southern France - it's the perfect book to have to hand but you could happily cook from it back in England. I’m leaving my copy behind in France but know I’ll have to get another one back home to replace it.

Sud de France is published by Prospect Books at £20

*The illustrations and the water colour on the cover are Caroline’s own.

** Since writing this I've cooked three more - a brilliant anchovy vinaigrette which I used for a salad of green beans, a gratin of chard stalks though I used ham rather than anchovies in it and a confit potato cake using butter rather than duck fat as I didn't have any to hand. Which is the way you should use a book like this - or any cookery book, come to that.