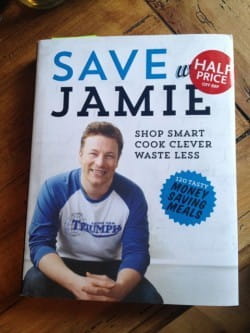 OK, he got it totally wrong with the ‘big telly’ remark - something he has apologised for on Twitter. "Thx for the comments guys good & bad I read them I don't always say the right things & media doesn't help but I always have best intentions."

Having interviewed him a couple of times myself, I think that’s true although he could have insisted the book was priced at a level those on a budget could afford instead of hefty £26 it will cost you to buy full price. (Not that you need to. Given the inevitable 'half-price' offers it's currently £13 at W H Smith and £9.99 on Amazon - but then you need a credit card to order it. And he did give away 4000+ copies to local libraries . . . )

He’s also naive to think the traditional Mediterranean lifestyle can be easily translated to the UK and maybe sees it with a bit too much dewy-eyed idealism, as Rachel McCormack points out in her excellent article in the New Statesman.

BUT - that’s not the point. Save with Jamie is not primarily for those who are using food banks but established Jamie fans who find themselves on a limited budget. Just as with any other income group some have the skills to cook and others don’t. And Jamie primarily addresses the former.

There are several recipes I fancy making particularly from the veg section which is sensibly placed at the front of the book. A lot are healthy and child-friendly like the Grated Rainbow Salad with Sesame Feta Fritters. I love the sound of Really Tasty Charred Asian salad and Jamie’s take on Okonomiyaki. And no-one could really complain at the expense involved in Baked Onion in the Hole.

The meat sections perhaps mistakenly start with a roast, or ‘Mothership’ recipe as Jamie puts it. Few people on a tight budget could afford that - or find themselves with much in the way of leftovers if they did. But it does highlight what you can do with a bit of forward planning. Save 300g from a roast joint of brisket (good to see him use that cut) and you can make a hearty brisket stew which can be used in four different ways (wirh yorkies, as a hotpot, with jacket potatoes and a pie) to feed six. And his chicken and chorizo paella for 4-6 is based on just two chicken thighs.

So basically this book is full of good ideas and recipes to make food stretch not about coping on the breadline. As someone who’s written a similar book The Frugal Cook* that’s what I tried to do too - and got a similar amount of flak for it. One critic on Amazon said "if the author thinks this is frugal she should have a word with my mother who cooked her way through the Second World War." You can't please everyone, especially when you're as high profile as Jamie.

Jamie Oliver's new series Save with Jamie starts tomorrow (September 2nd) on Channel 4. If you're looking for really low cost recipes check out the excellent A Girl called Jack with a book of the same name coming out next February.

I think it's a good buy if you can get it at a reduced price.

Thanks for the review. I'd been umming and ahhing about whether to buy it, but I think you've convinced me :-)

Anticipating a trend by 5 years - bravo Fiona. Glad to see a review that takes an even approach. It seems to be fashionable to knock Jamie, and although he sounded quite like a Tory MP in his unwise comments, I also believe his motives are honorable.

@Trisha - suspect you're exactly the sort of person the book is aimed at!

@Regula - I agree. He does sometimes get it wrong - wouldn't we under that kind of spotlight? - but at least he tries. And the recipes in the book are very appealing

Thank-you for this Fiona, glad to hear at least someone cutting him some slack on their blog. I am amazed by how people attack him but I guess it is easier to attack him than to face up to the fact that the goverment should be doing something like end the bedroom tax. I wouldn't want to trade places with him if you see the constant abuse he gets. At least he does something, those who attack him are often the ones who do nothing. I am fortunate to have talked to him personally as well and his heart really is in the right place. I just bought the book and was planning on doing a write-up as well, bring some positive into the negative.

it sounds like an interesting book. I love to cook but have just graduated recently.. so am still to become a multi millionaire.. ha ha! Might invest... especially at half price! x