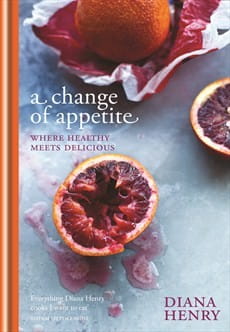 The only thing I didn’t allow for is that my husband might not want to change his appetite too . . .

Back to the beginning. Change of Appetite is award-winning author Diana Henry’s eighth book. They’ve all won ridiculous numbers of awards so much so that you look at a shortlist and think 'Not Diana Henry again!' But dammit, she deserves it.

The reason she keeps on winning is that in addition to coming up with brilliant recipes she’s also a fine writer with the knack of making it sound like she’s talking to you but also of infusing her recipes with such passion and poetry that you just can’t wait to get into the kitchen and try them.

Past books include the inspiring Crazy Water, Pickled Lemons, Salt Sugar Smoke and Food from Plenty but in this book she’s decided to focus on healthy food. And this is where the problems started. My husband has not the faintest interest in eating more healthily or of departing from his normal register of bourgeois French and Italian cooking. 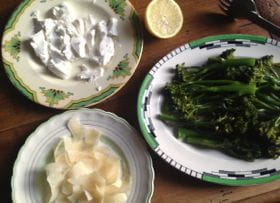 I tried four recipes all of which I could tell he’d made up his mind he wasn’t going to enjoy. (If this makes him sound like a fogey he isn’t - his taste in music and books for example is far more adventurous and electic than mine but, to coin a phrase, ‘he knows what he likes’.)

The first recipe I tried, burmese chilli fish with a hot and sour salad was infuriatingly the least successful of the four due to the fact that I used only about a third of the fish for the two of us (750g seemed like a lot of fish for four). Never a good idea to second guess the author. It made the turmeric which I’d only scaled down by half too dominant but I loved the bright zingy flavours of the hot and sour salad. My OH less so. 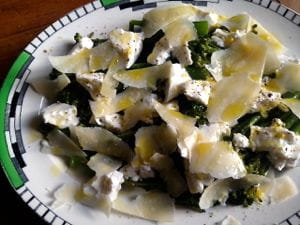 He also took against the fabulously sticky chicken and fennel with honey mustard and orange as being too sweet - my fault again for not making the accompanying black and white pilaf which contains bitter watercress to balance the honey's sweetness. An easy midweek dish, as Diana says. I thought it was really tasty. I imagine kids would too.

The other two thankfully went down better. A very simple and imaginative dish of purple sprouting broccoli, ricotta and parmesan with lemon (above) - a lovely way to serve PSB and an unusual and again very easy white fish, saffron and dill couscous pilaf (below) which I’ll definitely be making again (preferably when my OH is out). 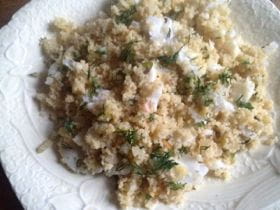 Other recipes I’ve bookmarked are the Japanese rice bowl, Japanese ginger and garlic chicken with smashed cucumber, warm salad of pink grapefruit, prawns and toasted coconut and lamb scottadito with summer fregola (the recipes are divided up by season). Oh, and braised venison with beetroot and horseradish because I bought some great looking venison from the butcher we visited for the BBC Food & Farming awards the other day. I reckon even my OH would like that.

Although I’m in love with this book I have a couple of minor quibbles. One is that as with Ottolenghti (who is a fan) some recipes feature quite a lot of hard to source ingredients - although Diana always gives alternatives. Even in Bristol I had difficulty finding some of them and I was well-motivated to track them down. And it would be useful if some of the recipes had been for two - maybe the simpler ones. A lot of people wouldn't necessarily be sharing the dishes with friends and family and scaling down isn’t always easy.

As I’ve mentioned before I always think cookbooks have a target audience. The same book isn’t going to suit everybody. So here’s who I think it would appeal to - and who would possibly find it less useful

Buy A Change of Appetite if

* you genuinely want to give your cooking a healthy makeover and incorporate more fruit, vegetables and fish in your diet

* you're drawn to light bright flavours. If you’re an Ottolenghi fan you’ll love it

* you read cookbooks obsessively in bed. This will give hours of pleasure

Don’t buy it if

* you refuse to eat anything other than French bistro food

A Change of Appetite is published by Mitchell Beazley at £25.