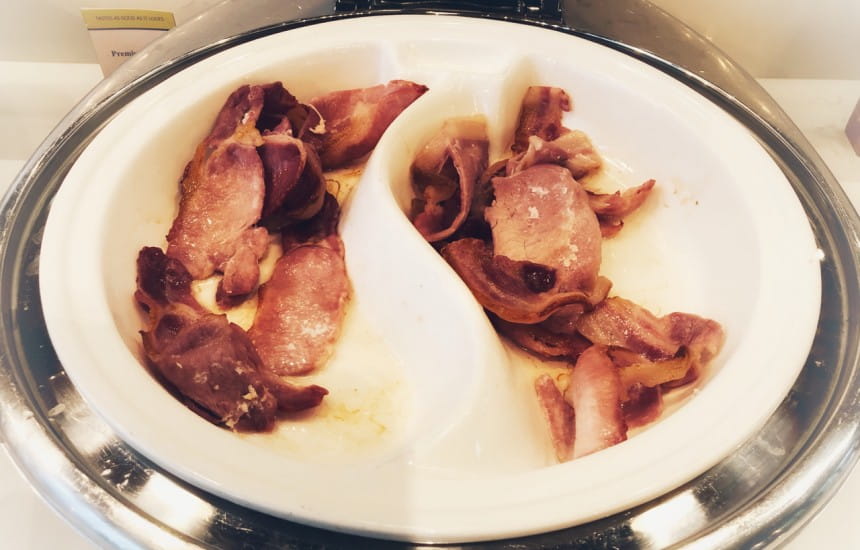 It should, I admit, have happened before now but a working weekend away with an overnight stay a chain hotel and a couple of long train journeys has finally convinced me I can no longer eat cheap meat.

'What’s taken you so long?' I can hear some of you ask sarcastically and I truly don’t know. I don’t buy cheap meat in a supermarket but when I’m on the road I seem to fall on any trashy food for comfort

The first nail in the coffin was a particularly disgusting Korean chicken burger at Leon, a chain that should know better. There was far too much meat for the £5-odd it cost so I can’t imagine it was ethically reared and had literally no taste at all. While I’m at it I don’t know in what respect it was Korean - a bit of cabbage and some mildly spiced gloopy orange sauce, I'm guessing (a ‘gochu-jang chilli mayo slaw’ according to their website which sounds much more impressive than it tasted) I left it after a couple of bites. Even if you love chicken this is a pathetic apology for a burger.

The second was one of those dreary breakfast buffets at the hotel I was staying at (a pretty posh Hilton Doubletree). I passed on the bacon which was oozing white goo but added a sausage to my plate. It tasted slightly fishy - nothing resembling pork. Again I left it after a mouthful.

Those of you who are fully blown veggies and vegans won’t be impressed by the fact that it’s the foul taste and texture of mass produced meat that has finally driven me to this conclusion rather than welfare considerations of which I’m well aware but like many people I tend not to think as much about where my food comes from as I should.

Over the years I’ve consumed bacon rolls and BLTs with no taste of bacon, soggy baguettes with limp, waterlogged ham, endless fried chicken of questionable origin and dodgy meat curries and kebabs. That has to stop. No great hardship when the vegetarian - and even vegan - options are so appealing these days (though I don’t count the frozen (I assume) mushrooms, undercooked, underripe tomatoes and tasteless oily hash browns on the same breakfast buffet). I will miss the occasional sausage roll but can always indulge when I feel confident about the origin of the pork.

Fish is a better option but there are issues with that too. I really don’t want to eat cheap farmed salmon, given the well documented health issues on which you should read campaigning food writer Joanna Blythman, and that means another sandwich filling - and smoked salmon - off the menu. But again the taste, and particularly the oily, greasy texture, is appalling

I realise that for many people eating more expensive meat isn’t an option and that it’s hard enough to get kids to eat healthily without cutting it out of their diet. I like to think if I was bringing up young children again on a tight budget I’d feed them a mainly vegetarian diet but wouldn’t blame anyone for not following suit.

But for me enough is enough. I don’t intend to quiz every restaurant and food producer I come across about their sourcing policy (I haven't the time or energy) but to use my common sense from now on to judge whether eating meat or fish is appropriate. If it’s a cheap food outlet, I’m veggie from now on and selectively pescatarian and carnivorous elsewhere.

Tell me I’m not going far enough - I’m sure you will - but it makes sense to me.

I came to this conclusion some time ago: not just cheap eateries, but many pubs and cafes (not those run by my sister) offer such awful meat based dishes that the veggie option is often, though not always, the only edible choice. Not necessarily healthier or less environmentally damaging ( think about how milk is produced or all those vitamin free ‘slaw’ slops) but at least edible. The other choice is sandwiches or bring-your-own boxes of breakfast supplies, though what a bore that would be.

The trouble is, people who don't grow their own veg think that mass-produced veg must be healthier than mass-produced meat / fish. It often isn't. Intensive modern production techniques mean that the nutrient content of veg is much less than it used to be, and the chemical content is higher. Big retailers often store fruit and veg for long periods and this further reduces vitamin content. Mass-production methods can also lead to contamination (e.g. e-Coli, listeria etc), especially in salads. And let's not mention how some restaurants treat their veg!

Being Flexitarian isn't easy at the best of times though. Avoid aeroplane meals that invariably use the cheapest chicken they can source.

You know, the high priced hotels tend to be very guilty of that. Putting crappy sausages and bacon on the breakfast menu.
You would think that the last thing you eat in a hotel should be memorable. Obviously the accountants, or whoever else who purchases food for the hotels, has been told to spend as little as possible. BAAAD IDEA.

I have been eating this way for over a year now. Glad to know there are others!

The weird thing is that that's the way I shop to eat at home yet faced with having to eat when I'm travelling on trains and planes I settle for really poor quality meat. Not any more!

I think you are just about right. I stopped eating cheap factory raised meat more than 10 years ago, and try to only eat local, ethically raised meat three times a week and on special occasions. That makes me happily a border line vegetarian but I don't hold with Vegans - that is a position too extreme for me.