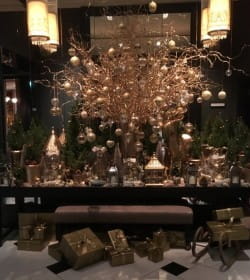 It’s the evening of December 27th and my daughter and I are holed up in the luxurious Rosewood hotel in London tucking into a club sandwich (her) and a lobster macaroni cheese (me) on room service.

It’s part of a new tradition we’ve established to spend 24 hours together in London just after Christmas. Kate’s not a great one for big family parties so this is the way we celebrate together starting with lunch (this year bento boxes at the excellent Sosharu to which we walked through the deserted streets) a spot of shopping (not high-end, a makeup raid on nearby Superdrug) and the rest of the day in the room, chatting and watching old TV series.

I chose the Rosewood because it’s always beautifully decked out with twinkly lights and Christmas trees (and they were nice enough to give me a media discount otherwise I wouldn’t have been able to afford it). Last year we went to the Hoxton in Shoreditch which is always fun but not quite central enough and the year before, the newly opened Beaumont just off Oxford Street which is sadly much spendier than it was then. The idea is to be able to walk to the shops - and hit the sales (the main point of going after rather than before Christmas). If you look online early enough there are always deals on sites such as booking.com. The period between the 27th and the 30th is a relatively fallow one for London and other city centre hotels) 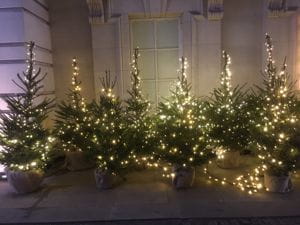 I like the idea of new Christmas rituals. You can never totally recapture those of the past. Circumstances - good or bad - force change upon you. The break-up of relationships, the arrival of children, the acceptance, years on, that they may sometimes want to spend Christmas elsewhere ...

When I met my husband we used to spend family Christmases in France with all the new traditions that involved, mostly food-related. Capon rather than turkey as the centrepiece of the Christmas lunch, boudin blanc rather than chipolatas and bûche de Noel in place of Christmas pudding though we did use to take over some mincemeat to make mince pies.

Since he died just over a year ago I’ve gone to my son and Spanish daughter-in-law’s who have incorporated some Spanish traditions - always a big leg of jamon (last year’s was actually from Lidl rather than Spain!), and addictive turron (nougat) sitting there temptingly whenever you walk by. (We still had the time-honoured bubble and squeak on Boxing Day though.)

Just like everything else in life Christmas changes. I think the answer, hard though it sometimes is, is to embrace that and regard it as an opportunity rather than a loss. Spending the day with just one of your children rather than frantically trying to make sure everyone gets on is a good plan for a start.

A friend told me yesterday that she’d taken a friend’s 14 year old horse-mad daughter to the Boxing Day meet for the first time, how magical that had been for both of them and that they would do it again next year*.

So what are the new Christmas traditions you’ve established over the last few years and which ones couldn’t you let go?

*yes controversial I know but before you start piling in this piece is about establishing new meaningful traditions not about foxhunting!

At our wedding 33 years ago we were given lots of 'advice': the bit we liked most and have followed is to not do the same thing at Christmas time, it would make life easier! Bearing in mind 220 cows, 400 sheep, 3 sons our early Christmases involved it has been great advice. We've had phases of family rituals, we have been careful to include others, their rituals and needs. This challenge to be flexible has huge benefits: this year a week of luxury in a gloriously glittery hotel in York for one Son's wedding, followed by a week home for our first Christmas a deux for 32 years has been equally special. Our boys all carry this flexibility with them: observing how easy it is for them to enjoy whatever comes. They do still always relish Christmas in their family home with a 10ft tree, brought in and decorated by them on Christmas Eve (they still squabble over the decorating!) and Beef for the meal 'birds belong in yards pecking around'! Yes we miss them, but hey ho they will be home for their father's 70th birthday in February, the banter of brothers rolls into town differently these days but the bonds between us are solid and thrive.... We've had a lovely but different celebratory time and it will grow and evolve.

That's a really lovely post, Cat. I used to prep to King's too but no longer do. I like the idea of the kids prepping veg being part of the ritual. All about some new, some old x

I love the sound of Sue's Christmas - and love the idea of getting away for a night, for a spoil. My own family is much more modest, but we've carved a new one out of an old, so everyone has to compromise and adapt a little. My step daughter spends them alternately between us and her mother. So we create traditions which fit within this cycle. Lilly prefers the build up to Christmas to the day itself, so we make the most of this. There are always gingerbread houses to decorate, craft sessions making decorations and wrapping paper, long walks roundabout and in Kew, looking for things we can adorn the wreath with. We always get the tree together, and the children enjoy unwrapping decorations as much as I do - they're already like old friends to them. Another fairly new custom is the Christmas boxes - one for charity (a kind of reverse advent calendar, collected through December) and another for my parents who live in Greece and rarely come to England over Christmas. From November the children think about what to put in this - home made gingerbread, cards and decorations, little presents. Always fun to put together. My dad always tells the story of "Greedy Margery" to the children over Skype - the same story he used to tell my brother and me before we sat down to write to Father Christmas. (Technology is a real boon, sometimes). Last year we adopted the Finnish custom of everyone being given a book and a chocolate on Christmas Eve. This year, Lilly had this to take with her. And as the children get older, traditions are replaced. I always used to do all the Christmas dinner prep listening to Kings on Christmas Eve (something I used to do with my mother). These days I have to listen to it later as there's always too much else going on. But what happened this year was better - Adam and his dad prepared all the vegetables between them at the kitchen table on Christmas morning, Adam peeling, Shariq chopping. It was lovely - the first time I've ever had help - and I hope it's one which will stay with us.

Sounds like you need to carve out at least one day for you and your new(ish) husband, Sue, to go off and do something on your own. Let the hoardes of offspring cook and cope. They'll be fine and you'll return to the fray restored

lots of interesting observations, as always. I'm one of those grouchies which tend to loathe much of Christmas and would probably prefer to run away to somewhere warmer where it's not celebrated. As an atheist it seems wholly pointless and commercial but throughout my first marriage I celebrated, as best I could, in the utterly traditional family way with husband, 2 sons, dogs, cats and occasionally waifs and strays who needed a refuge over the holiday period. Then there were the singleton divorced years, with all sorts of adventures for much of a decade and time with sons and their partners and/or families. Five years ago I met and four years ago remarried a soulmate who came with 3 adult children, their partners and now 6 grandchildren to add to my two, with a 9th on the way. Christmases are chaotic with noise, clutter, dozens of pairs of tiny shoes, hundreds of prezzies needing to be sourced and wrapped and a bigger, usually quite orderly country home large enough to accommodate small beds, cots, endless catering requirements and all the baggage which travelling with small children seems to involve these days.

As an only child who loved solitude it all takes a bit of getting used to, but 'embrace the chaos' was one daughter-in-law's advice and I'm trying....

Precisely my point. Sounds indulgent - it is - but compared to a week or even long weekend away it isn't tooo extravagant. And avoiding stations and airports at Xmas a total win. Your tradition sounds perfect too x

We have a pre Christmas night in a West End hotel. Costly yes but set against a weekend away not so bad and we take the bus to and from thus negating any risk of traffic jams or cancelled flights.
We luxuriate in the room, soak in the scented bath salts, watch old movies (snap) drink a bottle of wine eat snacks then wander round the streets looking at the lights once everyone has gone home. It's magical. 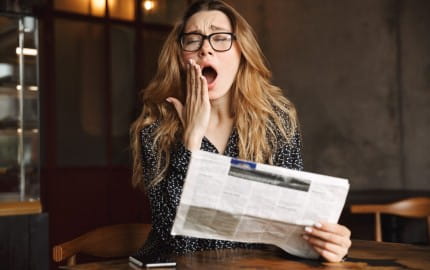