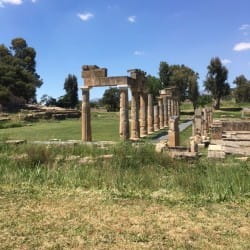 Instead I let things happen. A conversation with a Greek chef I know, Theodore Kyriakou of The Greek Larder, led to an offer to put me in touch with two winemakers in the surrounding area of Attica, which I’m ashamed to say I didn’t realise was Greece’s most historic wine-producing region. 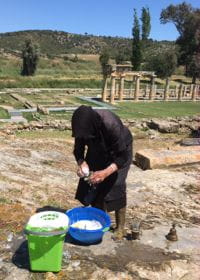 One - Antonia Papagiannakos of Domaine Papagiannakos - took me to the nearby temple of Artemis at Brauron together with its brilliant museum, an experience I'd never have had if I'd decided to head for the Acropolis. We saw a tiny stone church dedicated to St George being scrupulously scrubbed for Easter then drove down to the unspoilt resort of Porto Rafti to which many Athenians escape for the summer, to sit in a beachside taverna without an English voice within earshot.

Living like a local is not just a question of staying in an airbnb* - though that helps - but adjusting your mindset to a more gradual pace - one where you maybe do one thing a day rather than attempt to fit in six. Discovering things for yourself rather following the herd.

What normally happens if you’re going somewhere? You buy a guidebook, search Google, ask Twitter - you get a list of restaurants that have been written about dozens of times before. But in the case of Greece many people’s favourites turn out to be the local taverna they stumbled across. Such is the Greeks' hospitality you can have a good time more or less wherever you rock up. There are literally hundreds of tavernas of that type in any one of which you might have a decent meal. 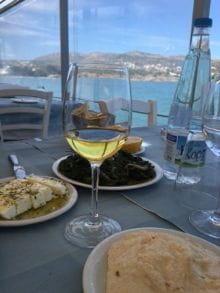 The secret of getting the most out of a trip is being prepared to change your plans at short notice. Spending longer in a place if it interests you, leaving if it doesn’t.

It’s easier to say this, admittedly, when you’ve visited a place before or if you’re travelling as a private individual rather than as part of a group - and I know I’m in a privileged position as a journalist but the whole nature of travel writing - 48 hours in so-and-so, 10 places you must see in wherever - telling you what to do every moment of the day lends itself to this idea that you won't enjoy yourself unless you're told where to go and what to do.

Who spends a trip to London visiting the Tower of London and Madame Tussaud’s or Paris going up the Eiffel Tower or Venice going on an overpriced gondola? Even skipping those touristy hotspots we flock to the same areas - that newly re-opened art gallery, that chic neighbourhood with the arty shops.

Can you truly say you’ve got the best out of a city without that kind of experience? I reckon you can and mean to try and do it more often. What about you?

*Oh, and if you're wondering from my previous post what my airbnb was like and why it cost so little the answer is it was great but in a quiet, residential area rather than one with a bustling nightlife. But only 5 minutes from the metro so you could be in the centre of Athens in 15 minutes. 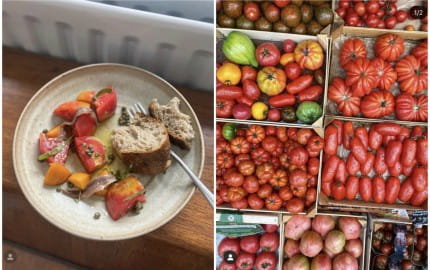