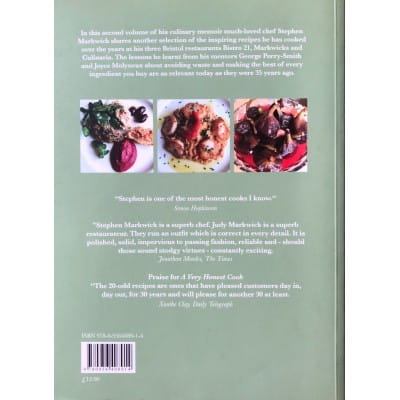 I’m really happy to give you the chance to a very special book called A Well-Run Kitchen, to mark the 10th anniversary of a self-publishing project on which I collaborated with my friend Stephen Markwick, a chef much admired by the former Times restaurant critic, Jonathan Meades.

Stephen who trained with the late, great George Perry-Smith then worked with Joyce Molyneux at the Carved Angel, is steeped in that quintessentially English-meets-Mediterranean cooking tradition that so influenced the West Country.

There’s a taster of the book already on the site in the form of Stephen’s salmon in pastry with currants and ginger which must surely be one of the loveliest Sunday lunches but the book also contains many of his other favourite summer recipes including ham hock terrine, crab tart, cucumber fritters with sour cream and dill, scallops with shellfish risotto, hot smoked salmon, smoked haddock and prawn lasagne, roast chicken with cream and tarragon, gooseberries in saffron custard, brown sugar meringues and his fabulous summer pudding.

It’s a short collection of recipes but every one is a winner and will make any one who was lucky enough to eat there dreamily nostalgic for Stephen and Judy’s much-loved restaurant Culinaria which closed in 2012.

There’s also a foreword from Joyce Molyneux, a timely essay from Stephen on the virtues of frugality in the kitchen and from Judy, one of the best hosts ever, on the art of running ‘front of house’

The price is £10, a discount of over 15% on the original purchase price and includes UK post & packing plus a donation of £1 on each book to NHS Charities. If you want it sent further afield contact markwicks@culinariabristol.co.uk about the additional costs that might involve. Or if you want to order more than one copy.

Sadly the first book we wrote together A Very Honest Cook is out of print but we might, in due course, turn it into an ebook!