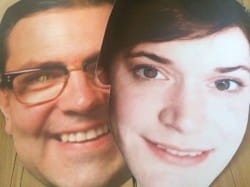 Arbutus has a good reputation for its wine list and the idea was to put the restaurant’s co-owner Will Smith up against a fellow wine expert, in this instance sommelier Ruth Spivey, founder of Wine Car Boot and wine buyer at Craft in Greenwich and see whose wine choices got the greatest support. 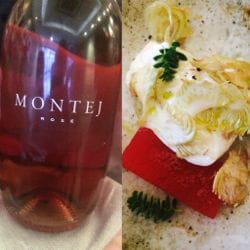 Interestingly the wines that stood out weren’t always the ones that made the best matches. For instance Smith fielded a gorgeous 2008 Pitasso from Claudio Moriotto with the second course of burrata and pressed watermelon but Spivey’s rosé I thought was a much better match, perfectly echoing the flavour of the fruit. On the other hand the quality of Smith’s 2011 Cascina Roccolini Barbaresco Roccalini just dazzled with the main course of beef with bone marrow croquettes even though Spivey’s 2011 Ghemme from Paride Chiovini (also a nebbiolo) was a perfectly sound match.

Opinions were much more divided on the first and last courses. I loved Spivey’s pairing of a bitter, herb-infused Chinato from Chinati Vergano with the very dense Amadei chocolate dessert but most preferred Smith’s more conventional choice of the 2010 A Demua from Stefano Bellotti of Cascina Degli Ulivi from Les Caves de Pyrène. (Well, I say ‘conventional’: none of these wines was mainstream but bitter is a particularly difficult taste to play with. Not everyone is an espresso coffee drinker or olive eater)

However Spivey outpointed Smith with her choice of a Roero Arneis, Daivej, Deltetto, 2013 with the first course - one of those incredibly useful neutral Italian whites that leap into life with food - in this case a delicate dish of pea mousse, pea and quinoa salad and a tempura-fried baby courgette with which Smith’s forward, fruity Nascetta, Langhe, Rivetto, 2013 just seemed to be a bit too full on. 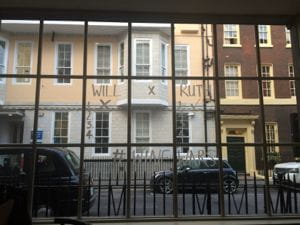 As the evening wore on the scores were marked up on the restaurant window and on a mirror at the back of the restaurant - initially Spivey went into the lead then Smith caught up and overtook her (probably much to his relief). Smith won on rounds but Spivey on points which seemed a fair reflection of the outcome - an impressive performance from both given neither had tasted the dishes beforehand.

Noisy partisanship was encouraged with guests encouraged to wave their Spivey and Smith masks to indicate their preferences though a waiter went round checking the scores as well to ensure that nobody cheated.

Customers were charged £85 for the evening which seemed good value for 8 excellent wines, an introductory glass of prosecco and a good quality 4 course meal. The next 'wine wars' evenings are on Monday September 21st with Frederic Grappe (the Loire) and Monday October 12th with Colin Thorne (Greece). Email info@arbutusrestaurant.co.uk for more details.

NB if you're thinking of staging a similar event, a practical point to bear in mind for today’s social media addicts. The lights in the restaurant were turned down so low that it was impossible to take a decent picture of half of the dishes thus losing a good opportunity for participants to tweet and instagram the proceedings. (My excuse for some rather blurry pix!)

I attended the dinner as a guest of Arbutus.