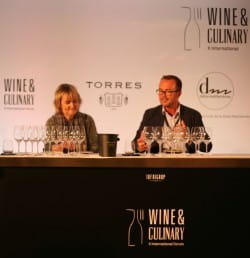 They varied from champagne to port with several different styles of red wine and all could be classified as fine wine.

Two observations struck me: first that the people who want to drink these wines - who may well be under 35 - don’t necessarily want to do so in a fine dining context or with dishes containing ingredients with which they’re unfamiliar so I suggested some unorthodox pairings I thought might appeal to them.

And secondly, having tasted them with my co-presenter sommelier Christophe Brunet at at least two different stages,* how much these wines change depending on whether you serve them straight from the bottle or decant them, how long they’ve been held in stock and whether they’ve been left open for a while which gives some idea of how the ageing process is likely to progress. Even with a wine preservation system, if they’re served in a glass the last glass is unlikely to be the same as the first.

Temperature is another consideration but I’m assuming for the sake of not over-complicating things that the wines are being served at the temperature advised by the producer. I’ll come back to temperature another time.

Anyway here are the wines and my suggested pairings:

An unusually rich champagne of 60% pinot and 40% chardonnay which could easily be carried through a meal. Pol Roger’s own site recommends foie gras, chicken supreme with chanterelles and sweetbreads with morels. My first thought was seared scallops but I liked the chicken idea - especially a roast chicken with a fabulously crisp skin. Or even just chicken skin which is nowadays often taken off the bird, crisped up and served as a garnish or ‘snack’. Or umami-rich puffed-up fish skin which is popular in many restaurants.

Still very elegant and fresh. Classically a wine for raw shellfish like langoustines and crab or maybe a light shellfish risotto. Delicious with a lobster roll but served cold rather than hot.

As the wine evolves that shellfish could be cooked - a baked crab dish for example or lobster canneloni, a pairing suggested by Christophe. A warm lobster roll. Or fine fish such as halibut with a fennel or roasted cauliflower purée or the dish of ceps and cream we had in Bar Canete in Barcelona last night

A classic Mosel riesling - just 8.5% - with a delicate sweetness - perhaps the wine in the tasting that would most dramatically change over time. In its current youth it could easily handle spice. It’s listed on the menu at Sailor’s Thai in Sydney where I can imagine it going brilliantly with dishes such as king salmon with green mango, chilli and lime or pomelo salad with prawns, chicken, peanuts, chilli jam and tamannd. It would have been delicious with the pork buns that were served at the buffet.

But a year or two down the line I see it developing more of the smoky, kerosene character it exhibited after being opened for a while and fitting in better with the Scandinavian register of smoked and cured foods or with smoked salmon. There are other suggestions from the Wine Society which stocks it here.

At 13.5% a comparatively light, elegant Tuscan red that you could try with a wide range of different dishes which would make it a flexible choice for a table where everyone was ordering different things. On first opening it was easily fresh enough to go with fish such as seared tuna, grilled prawns or octopus. (I liked the idea of serving it with the Spanish seafood dish arroz negro - and Christophe with gambas heads).

As it opened up it became smoother and richer. I could imagine as it aged it would be a good match for offal dishes such as calves liver, kidneys and with light game such as rabbit. And it would be a great match for a simple stone-baked pizza - maybe a heretical thought but with a good hand-made base, ripe tomatoes and artisanal bufala mozzarella it would show off the wine to perfection.

Still very much in its youth - in fact infanticide to drink it at this age but there are many customers would seize the opportunity. Lamb is the obvious pairing (I had a 1991 Tignanello recently in a new London wine bar called Mission with a plate of grilled herb-crusted lamb chops - a wonderful match). I reckon in its youth it could also handle Korean-style steak marinated with soy and sesame - there’s a youthful sweetness to the wine that could handle punchier flavours and more classic steak dishes such as bistecca alla fiorentina as it ages. It would also be great served with a 2-3 year old parmesan - cut in jagged shards as they do in Parma

Sometimes the presentation and reputation of a bottle suggests a match and so it proved with this handsomely packaged bottle of Chateauneuf du Pape. Undecanted it exhibited an intense richness and sweetness that made me immediately think of occasions like Thanksgiving and Christmas. It would be a splendid bottle for a turkey, especially with the classic accompaniments of squash and sweet potato - also with a handsome leg of pork. Decanted it became more structured and savoury, suggesting slow cooked beef rather than turkey or pork. Beef shortribs would be a great pairing.

Although I know it would pair well with roast lamb I found it hard to get beyond steak with this powerful well-structured wine but it gave rise to the thought that it would be interesting to pair different vintages with beef that had been aged for different periods: a younger Valbuena with a 28 day aged steak for example, a more mature vintage with a 55 year old one. A steak and wine section of the winelist maybe? More a wine for sirloin or porterhouse than for rib-eye or fillet, I suggest.

The bottle in the line-up that exhbited the most maturity though again it changed on exposure to air, the fruit character becoming fuller and more prominent. Another wine for more mature meat - mutton rather than young lamb for instance or for less aggressive cooking techniques - roast beef rather than a chargrilled steak. The ideal way to enjoy it would be a St John meat pie - a rich steak pie with a crisp, golden pastry topping. With its own savouriness Bordeaux suits English-style gravy better than many other wines and frankly it’s hard to go wrong with meat and potatoes with a great red. Cheese would also be a particularly good pairing - maybe a flight of cheddars of different ages or the same age from different producers.

A classic Bordeaux blend (Cabernet Sauvignon, Cabernet Franc and Merlot) that would obviously work with any of the usual Bordeaux suspects - roast or grilled lamb or beef, especially with herbs or with duck. But with its comparative youth and ripe fruit it struck me that it would be a great match for a gourmet burger (made out of top steak, of course. The kind you’d find in a high end steak restaurant) because it could cope with other ingredients such as cheese, onion and bacon. It would also be good - and we don’t think about non-red meat eaters enough when it comes to fine wine - with grilled portobella mushrooms with garlic.

Should you pair a luscious sweet wine like this with a sweet or savoury dish? Etienne Hugel amongst others argue that a wine like this is sweet enough in itself it’s better to go for the contrast of a savoury dish such as foie gras, strong cheese or caramelised pork. But I find it so luscious that I want to stay in a sweet register. I’m thinking beignets with an apricot and mango dip or cinnamon and apple doughnuts (cinnamon being a great spice with grewurztraminer). I also think the incredible viscosity of the wine would lend itself well to ice cream - maybe a cinnamon and apple ice cream with a spiced nut brittle. Or you could go for a tropical fruit-topped pavlova.

If you are pairing such a sweet wine with a savoury dish I'd personally go for an older vintage though I appreciate it's partly a matter of culture - if you’re used to the combination of sweet and spicy as is the case in, for example, China or Thailand you may be more receptive to the idea of a savoury dish like duck or pork with a sweet wine like this. But a dry dish I suggest not a curry.

A deliciously smooth, velvety young vintage port that would of course be good with cheese but even better with chocolate. I would serve it with a flight of single origin dark chocolate squares such as the 74% Ecuadorian chocolate I paired with it at home which went quite beautifully. Or a plain, dense, not overly sweet small brownie.

Christophe and I were discussing afterwards whether it would pair with a savoury dish such as the richly sauced pigeon dish the Roca brothers served with gingerbread and griottines at the Wine Culinary lunch which rather overwhelmed the accompanying 1996 Mas Borras pinot noir. We thought it would.

* We opened the bottles at 8.30am and tried them again at 12.30pm. I had also tried some of the wines before the tasting

You might also be interested in this week's match of the week which featured another unusual pairing from the conference. And if you'd be interested in another perspective on the PFI wines my colleague Jamie Goode has posted his tasting notes on his wine blog. 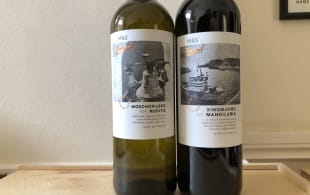 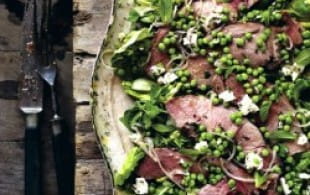 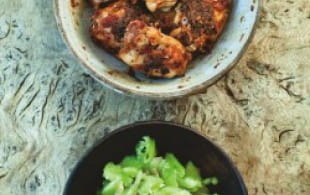