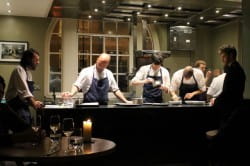 "I didn’t know quite what to expect of Viajante in Bethnal Green. I’ve been intrigued by the sound of Nuno Mendes’s experimental cooking, so was fascinated to go along to a dinner there hosted by Wines of Portugal.

I was immediately struck by the warmth and friendliness of the place and loved the design and intimacy of the rooms used for the restaurant in this converted town hall (now a hotel). Things started off with a bit of a glitch as my fino sherry from the bar wasn’t chilled, despite the cool glass. However, what followed turned out to be an exemplary evening of great food and wine.

Soon after being seated we were told that Viajante likes to serve their menus blind, only providing printed details at the end of the meal. This was a bit disconcerting. We had been given a list of wines, so knew what to expect on that front, but couldn’t understand why we were expected to sip the first wine, a sparkling Bairrada (Filipa Pato ‘3B’) with a series of small dishes (which didn’t all go as well as I’d like with the wine). 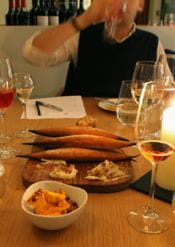 Aha – these turned out to be the (five!) pre-starters: duck and skin with crispy rice, red prawns and garlic, gordal olive soup, razor clam, and bread with Serra da Estrela cheese and rendered chorizo fat. The wine was deeply coloured with fresh perfumed red berry fruit and didn’t suit some of the more subtle dishes (especially the delectable razor clam dish – a bar of creamy jellied clam with coriander and green olive, served with a delicate broth and tiny pieces of lemon). The sparkling Bairrada was just the ticket, though, with the bread and chorizo fat. The selection of bread and the decadent spreads were fabulous. You could have snacked on them all day.

Our first ‘proper’ course was mackerel toast with roasted peppers: the bread (‘toast’) was wrapped around the barely cooked fish in what was quite a Japanese inspired dish. This was served with Aphros Loureiro 2011 (Lima) – a sort of super-smart Vinho Verde, biodynamic and packed with perfumed, zesty lemon fruit. It was a great match and I’d loved to have tried it with the clam dish.

The second dish was octopus and onions served with a white from the Douro – Tons de Duorum 2011. The pungent sweet caramelised flavours of both the onion broth and charred octopus were too much for the wine which was restrained and youthful (and perhaps a bit tight). I liked it a lot – tense structure and good minerality, but it didn’t show as well as the more exuberant and versatile wine that followed – Julia Kemper Branco 2010 (Dão). This came with the third course, cod and tripe with parsley and potatoes. The wine had been bolstered by fermentation in oak and was a much happier partner to the big flavours of the octopus and onions and was particularly good with the salt cod dish (which also had an onion component, but this time crispy fried). 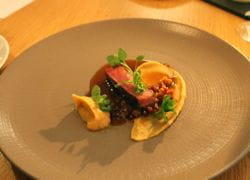 We moved on to reds with the fourth dish – Iberico presa (a prime cut from the shoulder) and chick peas served with Quinta do Encrontro ‘Preto e Branco’ 2008 (Bairrada). This was a blissful match – aromatic black fruit, smooth supple tannins, long and poised, with a touch of spice. The succulent complex and smoky flavours of the pork and the creamy earthiness of the chickpeas had an unexpectedly mellowing effect on the wine. Delicious – and the first time I’ve eaten pork rare. I’m afraid this was the moment I started resenting the small plates as, had it been served as a proper main course, this would have been so satisfying. It left the whole table feeling a bit teased as the experience was over in seconds!

The course that followed was farinheira sausage with wild cabbage and broth with Herdade dos Grous 2010 (Alentejo). This was a juicy tender rissole with a tasty meaty casing and some pimenton really brought it to life. The wine was a blend of Syrah and Alicante Bouschet, so doubly spicy with the pepper in the dish, although it had a rustic charm that suited the sausage.

We moved on to a pre-dessert of farofias – soft meringue in a light custard, rather like floating islands/iles flottantes. Delectable, but inhaled in a nano-second. Two ports were poured for desserts – Niepoort 20 Year Old Tawny and Graham’s Quinta dos Malvedos 1999.

Our main dessert was arroz doce with roasted figs (they do this by wrapping them in cabbage leaves and leaving them to cook, buried in smoking charcoal). The contrast between the smoky fig and the cool, crunchy, creamy, fudgy rice was fascinating – an extraordinary combination and delicious with the tawny port.

We then had a couple of interesting petit fours. Firstly an olive oil truffle that was finished off in some liquid nitrogen at the table to freeze it – sticky, chewy and creamy, and then a cep truffle lightly coated in chocolate. Gorgeous, but left you wanting more. The tawny port went best with all the desserts as the vintage port was a bit closed and spirity.

It was an extraordinarily good meal in a charming and genial environment. However, I’m in two minds about the trend for small plates. I do appreciate the chance to try so many dishes and experience this level of culinary skill and endeavour, but it risks leaving the diner unsatisfied after a long sitting. I’m not looking for too much, but I’d like a bit more of (such) a good thing!"

Lucy Bridgers was a guest of Viajante and Wines of Portugal. 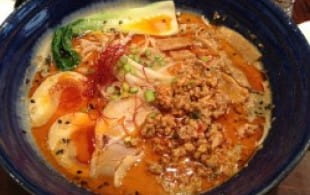 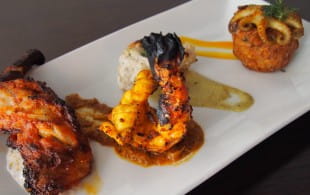 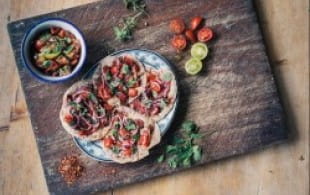 Great idea! Although think Wine and Sausages would appeal more than Bairrada and bangers!

Portuguese wines are made to go with food. Following our sell out Wine and Pies night this year we are going with Wine and Sausages in the Spring! Bairrada and Bangers ?