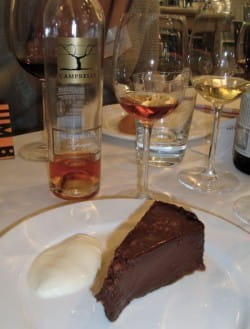 The event started with a tasting of 27 wines reflecting some recent developments in Australia. These included a number of elegant aromatic, largely unoaked whites: stylish examples of Viognier, Vermentino, Pinot Gris and, more predictably, Riesling. There was also an interesting retro-styled basket press Semillon from Tyrrells.

Iberian varieties featured in some of the reds – Graciano from Brown Brothers, Tempranillo from Wakefield and Henschke. D’Arenberg’s Sticks and Stones encompassed Tempranillo, Shiraz, Tinta Cão and Souzão (McLaren Vale). And there was some quirky fizz: Este Ultra Sauvage from De Bortoli (Yarra Valley) which was tangy and earthy with great personality.

Chef Jeremy Lee had put together a wine-friendly menu for this large gathering. With my starter of green bean, mussel and potato salad I enjoyed Jim Barry’s elegant Florita Riesling 2011 (fragrant and mineral) and Tyrrell’s Johnno’s Semillon 2010 (deliciously zesty). However, Tahbilk Viognier 2011 punched above its weight with the food – the fresh acidity and peachy fruit working especially well with the mussels. I’d also been rooting for the Henscke Littlehampton Innes Pinot Gris 2009 (Eden Valley), but the seafood brought out too much honeyed sweetness in the wine and it wasn’t sufficiently palate-cleansing.

Given all the tempting reds on offer, I selected sirloin of beef, pickled walnuts and watercress as my main course. The steak turned out to be trickier than I’d expected, as it wanted a wine with a decent tannic grip and refreshing acidity. I found the alcohol too dominant in some of the reds (Grenache and Grenache blends, especially), although the mellow ripe fruit and fragrant spice box aromas of D’Arenburg Blewitt Springs 2009 and Taylor’s GSM 2010 worked well.

The table plan had a great influence on which wines you were able to drink, as the wines had been personally brought through from the tasting room. Several tempting options were physically out of reach. That said, there were still some great wines circulating. Howard Park Flint Rock Pinot Noir 2010 (Great Southern) turned out to be my favourite with the main course, with its elegant supple structure and complex aromatic fruit (I was sitting near Jeff and Richard Burch of Howard Park). It had enough acidity and tannic grip to handle the meat.

I was also poured some Henschke Tempranillo by the lovely Johann H (my neighbour during the main course), who had brought along a barrel sample. Its youthful juicy fruit was a good match, too. I’d like to have experimented with more of the Iberian varieties as they’d shown well during the tasting.

Dessert was more straightforward as there had only been one sweetie in the tasting – Campbell’s Rutherglen Topaque NV – and they probably don’t come much more versatile than this. Amber toned with delectable sultana, marmalade and toffee aromas, this late-harvest Muscadelle was spot on with my almond cake, poached pear and vanilla cream and equally good with the St Emilion au chocolate which was also served. It was fitting to end the meal with such an Australian classic (from a company dating back to 1870) in the presence of some young custodians of this country’s rich wine heritage.

Lucy Bridgers attended the lunch as a guest of the Australian First Families of wine.