The Wine Spectator ‘Rarities’ dinner, the first formal event of the Food and Wine Masters was held at the Park Hyatt Palacio Duhau in Buenos Aires. The six course meal was paired from library wines from the cellars of the participating wineries chosen by the Hyatt’s sommelier Marcelo Rebol and Aldo Sohm of le Bernadin in New York, nominated best sommelier in the world last year. Here’s what we ate and drank - and a picture of the screen above our table that showed what the chefs were doing in the kitchen (Not shouting, as you see!)

‘Gougeres’ made from moutarde d’Orleans served with arugula (rocket) jus, Perigord truffles and green peas with La Rural Felipe Rutini 1996
Jean-Francois Rouquette of Pur Grill at the Park Hyatt Paris kicked off with an elaborate version of gougres that bore little resemblance to the Burgundian version. The powerful umami hit of the combination though proved a successful match for the 13 year old La Rural wine which was dominated by its earthy mushroomy sous bois flavours. Not really a good enough wine to stand up to this length of ageing though (a comment that proved true of most of the wines we tasted)

Slow-cooked black hake with confit nicoise vegetables and fennel foam
Trapiche Medalla 1997 Chardonnay and Vina Pomal 1985 from Bodega Bilbainas in Rioja
There were two matches with this clever fish dish from Nicolas Sale, a bright young chef from Provence who brought his Mediterranean flavours to the party. Personally I preferred the Trapiche Medalla Chardonnay - not an extraordinary wine - made to taste extraordinary by the rich fish and fennel (always a good chardonnay pairing). It freshened and breathed life into the wine making it taste almost like a Meursault. By contrast the 22 year old rioja, provided from the cellars of Bodega Septima was a fine example of an older wine, just wrong with this dish. Game would have been a conventional but much better pairing.

Braised veal cheeks with spinach, potatoes, apple and port wine sauce
Finca Flichman Dedicado 1996 and Catena Zapata Angelica Zapata Malbec Alta 1995
A sensibly restrained dish from Fernando Trocca who consults for the Gaucho Grill in London, maybe the only chef who put his talent on hold to allow these old wines to shine. Using veal rather than beef lightened the dish as did the spinach, potatoes and apple and the nice little crunch of salt crystals. The port jus wasn’t too extracted. The Dedicado definitely benefited from being served decanted from a double magnum - it was far fresher than the other wines we tasted, still rich and powerful but with well integrated tannins. The Catena Angelica Malbec I found a disappointment, with odd, slightly smoky flavours. It paired well enough with the veal but was an underwhelming companion. 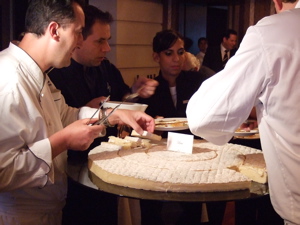 Brie from the cheese room with, truffle oil, pear chutney and nut grissini with Terrazas de los Andes Gran Cabernet Sauvignon 1999
When I saw that Brie had been paired with a young(ish) Cabernet Sauvignon I thought ‘what a mistake’. I was wrong. It was matured to perfection to bring out the mushroomy flavour of the paste without developing any bitter flavours in the rind. (It was also served with great drama in a huge wheel from which the chefs cut portions and plated up in the middle of the dining room. A nice bit of theatre. Chef Christophe David’s* accompaniments also helped the match with what was still a surprisingly vibrant-tasting wine (though with no intrusive tannins): a delicate, not over-sweet or over-sour pear chutney (more like a compote), some nut-crusted grissini and a drizzle of truffle oil mixed with finely diced truffles. A perfect cheese course. (No-Mi at the Park Hyatt, Chicago*)

Honey roasted fig ‘mille-feuille- with Arlette croustillant and raspberry sorbet with Graffigna Centenario Malbec Tardio 1999
A well conceived match for this Late Harvest Malbec though not a total success as a dessert, I felt. Roman Dombrowski pastry chef of the Park Hyatt Duhau, Buenos Aires had obviously been thinking hard about the flavours that would pair with a port-style wine (I didn’t note the alcohol but suspect it was more like 15 or 16% than the usual 20%) and his use of rasperries and a little touch of chocolate was spot on.

All in all this was an ambitious attempt to create a top end dining experience that was let down by the quality of the wines. Not that they were poor to start with, simply never designed to age that long. I suspect a similar dinner held in 10 to 15 years time would be a different story. Argentina’s wine industry, like Chile’s, now has a much wider variety of top end wines with greater ageing potential to offer.