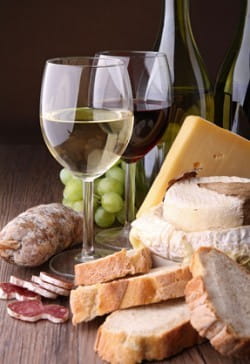 I’d go along with that, particularly when it comes to cheese, but not with red meat, which with rare exceptions like boiled beef, I think works better with red wine.

According to the report he appears to challenge the idea Pauillac goes with lamb on the basis that there are now many styles of Pauillac - and not much lamb in the area. I wasn’t at the presentation but it would have been interesting to learn what he thinks of the role of psychology in matching - i.e. the fact that people feel comfortable with the idea of a match, expect it to work and therefore it does.

He also has some interesting observations on the role of the tongue and teeth in releasing flavour and suggests that there are new tastes in addition to the five basic ones (sweet, bitter, sour, salty and umami) which he calls fatty and calcium.

What I find even more fascinating is that he creates new terminology for the food and wine matching theory of ‘complement’ and ‘contrast’ which he calls ‘coating' and 'contracting’. Contracting happens when the mouth is subjected to acid, salty, peppery or cold food or drink or bubbles (therefore presumably champagne). Coating is created by fatty, sweet or sticky foods and drinks. He thinks that contracting foods and wines should be paired together as should coating foods and wines (presumably why full-bodied oak-matured reds work with steak).

All this contributes to the growing emphasis on the science of food and wine pairing - an avenue also being pursued by French-Canadian François Chartier, author of Papilles et Molecules (Tastebuds & Molecules).