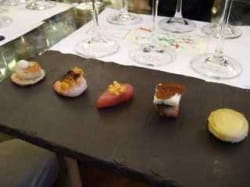 The technical side I found slightly difficult to follow - we were encouraged to sniff a series of phials on the table which contained the different compounds then taste the champagnes then try them with food. Given the session was packed out it all got a bit chaotic but it threw up some fascinating combinations which I’ve now had the chance to analyse in a bit more detail:

G.H. Mumm Rosé
Style: light, elegant, tasted of wild strawberries
Flavour compounds: Ethyl-2-Methyl Butyrate (apple, tropical fruits), Ethyl Isobutyrate (fruity, light, strawberry, tropical fruits)
Match: The shell fish and tropical fruit flavoured molecules of the ros were paired with yellow fin tuna sashimi and served with green mango and papaya salad seasoned with chilli, sugar and soy
My verdict: Another combination I wouldn’t have instinctively gone for but which worked very well. Interesting though that these components were also found in the Mumm de Cramant which I don’t think would have worked quite as well with the canap. Apparently Iain tried it with seared tuna but that didn’t work as well.

G.H. Mumm 2002
Style: mature vintage champagne
Flavour compounds: Diethyl Succinate (apple, tropical, star fruit, Cognac), Penyl Ethyl alcohol (rose, fermented, yeast, bread), Ethyl Crotonate (rum, sweet meat, pork, licorice) 2-Nonanone (blue cheese, yeast)
Match: Pork belly, dolcelatte and pain d‘epice: the yeasty, blue cheese and liquorice-like Mumm 2002 were paired with roasted pork belly served with macerated blue cheese and spiced bread crisp
My verdict: Like Iain I would never have put these ingredients together but they were surprisingly delicious. Would you serve them at a dinner party though, or, as a chef, in a restaurant? Can imagine them making a good burger . . .

“There’s no one molecule that smells of ‘champagne’,” said Hodrien. “They are each like instruments in an orchestra. And orchestras containin the same instruments sound different depending on the music being played, or even the conductor” 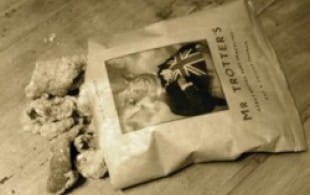 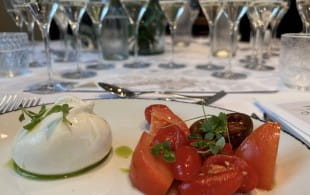