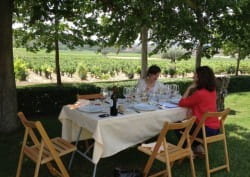 How food can make your wine shine

I have no evidence for it but I’m sure that the vast majority of wine that people buy is bought to drink with food. Yet most of the wine that’s tasted or presented to journalists and bloggers is shown on its own.

As I conceded in my first post on showing off your wine that may be the only practical way. Some journalists - the ones who write purely about wine - don’t want the distraction of food and food smells, as Andrew Jefford made clear in his Decanter post, Lunch is not a Story. But some do, especially those of us who write about food. And it seems to me wine producers, importers and retailers are missing a trick.

An imaginative choice of food or an unexpected meal can make your wine stand out. I admired the chutzpah of Robert Rolls a while back choosing to host a lunch with one of their producers Hubert Lignier in the middle of Burgundy week. A well chosen venue (The small first floor dining room at the Quality Chop House), simple French food (home-made paté and lamb chops) and the chance to taste some older vintages made this a memorable occasion and put Rolls on the radar for me. And how much more convivial it was than spending a couple of hours standing and spitting which provides only a fleeting chance to talk to producers.

Then there was the lunch at Bodegas Beronia where a great home cook came in to make a lunch of typical Riojan dishes including the fabled menestra and milk fed lamb giving us a real feel for the local food and the unexpected discovery that a dish with artichokes can be delicious with a young red.

Drinking sherry with Sam Hart of Fino and Javier Hidalgo in Sanlucar a couple of years ago reinforced something I admittedly knew from a previous visit - that sherry shouldn't be limited to tapas and that that manzanilla makes a great match for a whole range of fish and shellfish. The message to take away from that? A Friday night bottle of fino or manzanilla would be great with your fish and chips.

And I doubt many wine journalists would be writing about McGuigan had they not gone into partnership with chef John Torode and produced an enticing selection of recipes with which to pair their wines. And Nederburg have recently set up a similar partnership with TV presenter Jimmy Doherty.

Alright for some, you might say, with a lavish budget to spend but bringing food into the equation doesn’t need to be expensive or involve a pricey restaurant. It could be a simple matter of offering 4-6 canapés at the end of a tasting to show how your key wines work with different dishes and ingredients. Or, for wine merchants, taking a couple of local press and bloggers to a local Chinese or Thai restaurant and playing about with some different wine styles.

You might also ask yourself if you can afford not to show your wine with food particularly if they’re the sort of wines that don’t stand out in a line-up or the shouty ‘look at me' kind that win wine competitions. Or if they’re tannic young wines like Barolo which may be unforgiving on their own.

Obviously it’s difficult for wine shops to prepare food on site unless they double as a deli but there’s no reason why products at ambient temperature like chocolate, charcuterie or truffle paste shouldn’t be served, especially if you can persuade a producer to come along and hand out samples. Or even charge a nominal amount for a ‘sip and a snack’, refundable if you buy a bottle to discourage freeloaders. Many wines would taste better for it.

Another argument against involving food (we’re incredibly good in the UK at finding reasons NOT to do something) is that telling people what to eat with a wine intimidates them. That they should be able to drink whatever they like with the food they like. No rules against that, obviously, but let’s not pretend some matches aren’t more appealing than others.

Would you take the same attitude to food and say ‘you want to serve fried fish with gravy - go for it!’. ‘Top your steak with sliced strawberries? Hell, why not?’ Why not is because most of your customers' guests wouldn’t enjoy it. And you (the producer or wine merchant) might be able to guide them to something they would find much more pleasurable.

So, to paraphrase Andrew Jefford, lunch can be a story - it depends on the kind of story you’re telling. And for most people food is an entrée to wine, not the other way round.

Tags: how to make your wine stand out food and wine matching

See all entries tagged "how to make your wine stand out"