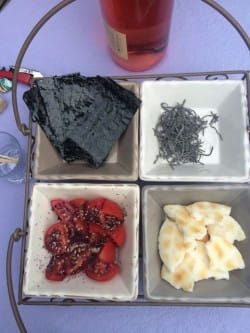 My guide was a Japanese sommelier Juli Nakata-Roumet who is married to the director of the promotional body for the wines of the Centre-Loire, Benoit Roumet. She’s also a talented cook who intuitively understands the interplay of taste and texture. The meal she prepared - one course of which I’ve already mentioned in my match of the week - was a masterclass in showing off the best of the region’s wines without sticking religiously to local dishes.

It was the Japanese snacks she served before dinner with three different rosés from the region that prompted this particular insight. Two kinds of seaweed - one lacquered, one slightly chewy - provided an umami element, there were some very salty rice crackers and some cut tomatoes with a sprinkle of furikake seasoning (I think) to offer acidity. All made the very fresh young rosés we were tasting seem much smoother and more rounded - as if they had another six months bottle age on them.

Other foods which feature these basic tastes can have a similar effect. The saltiness of raw shellfish such as oysters explains why young acidic whites such as Gros Plant and Muscadet pair so well. The umami element in nori (seaweed) flatters a young crisp white or rosé and a vinaigrette, often denigrated as having an adverse effect on wine, is unlikely to trouble a newly released Sancerre or Pouilly Fumé*. (Fresh tomatoes are a great match for sauvignon.)

Fried foods, too, especially fish, offset sharpness in a wine though I'd match richer, sauced fish dishes with wines that have acquired a bit more maturity and weight.

* Just to emphasise that this applies mainly to dry, high acid wines. Aromatic whites and sweeter rosés generally taste much more complete on release and sharp and salty ingredients and dishes may unbalance them. There you need to provide a touch of sweetness or spice.