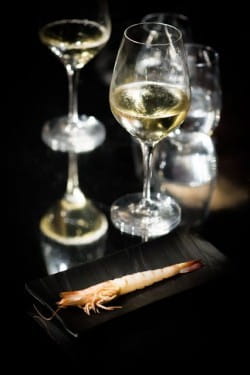 In a further cause for optimism, the invitation had come courtesy of Dom Pérignon. I was vaguely aware that the house had engaged the services of the nascent elBulli foundation to conduct some research into its DNA, with the hope of ‘decoding’ the Champagne and uncovering its defining characteristics. What I hadn’t realised was that the partnership was the result of a long-standing friendship between DP’s eccentric, cerebral chef de caves Richard Geoffroy and elBulli’s even more creatively restless Ferran Adrià.

And so it was that I found myself, along with three other journalists, from France, Italy and Japan, in elBulli’s Barcelona headquarters listening to Adrià, in mad-professor mode, explaining his vision for the thus far mysterious foundation. Amid 50-odd young staff at simple, Ikea-like desks, surrounded by similarly spartan bookshelves dotted with post-it notes, the walls plastered with charts and handwritten questions (‘What is a tomato?’; ‘How should we drink Dom Pérignon?’), Adrià talked us through his vision.

It wasn’t, it’s fair to say, entirely coherent. Adrià is a man who seems to have 20 different thoughts every second, not all of them related, and making sense of his rapid-fire Catalan was a challenge not just for our intrepid interpreter. The ultimate goal, though, appears to be the creation, on the site of the old elBulli, of an institution for chefs and gastronomes to study and explore not just the evolution and techniques of cookery, but the concept of creativity as a whole. Along the way, Adrià intends to create a so-called Bullipedia reference tool and an archive of cuisine, all intended, he says, ‘to make the next generation of chefs better than us’.

The research being carried out on DP is, if anything, even less defined, with Geoffroy cheerfully admitting he has no idea as to where the three-year project will lead. ‘It could be a formula, a food pairing, a book, a sentence…’ In a bid to crystallise matters, we tasted through all the vintage releases of this millennium –five consecutive years from 2002 to the current release, 2006. The most interesting was the 2003 – Geoffroy admitted he had wanted to make a vintage in that sweltering, most challenging of years, almost to prove it could be done. I wonder if his soaring ambition got the better of him – the wine is already well developed, and I’m not convinced it will stand the test of time, though Geoffroy is adamant it will. 2002 was, to my mind, far more impressive at this stage, creamy shortbread in a glass.

It was the evening’s events, though, that really took the biscuit. After a visit to the Boqueria market, just off Las Ramblas, where Adrià salivated over the fresh seafood to the backdrop of starstruck stallholders and selfie-snapping locals, we strolled around the corner to the fabled elBulli Taller. This is the development kitchen to which Adrià and his most trusted lieutenants retreated for six months each year, when the three-Michelin-starred, five-time ‘Best Restaurant in the World’ was closed, to work on new dishes for the following season. These days, it is used for occasional research and even more occasional private events ‘for friends’. Fewer than 200 people have ever eaten here. We were among the very, very lucky few. 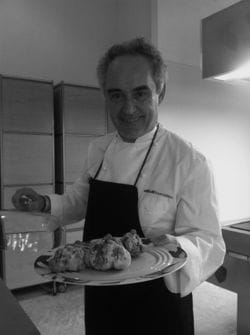 What followed was a 14-course meal for six of us, cooked a few feet away by Adrià and nine other chefs, who had drawn lots to be among the crack team (it wasn’t just us for whom this was a special occasion – Adrià himself said it was the first time he had ‘properly’ donned his chef’s whites for ‘three or four years’). The meal was entirely based around white truffles, and entirely paired with Dom Pérignon (I know…). Adrià calls the white truffle a ‘magic, unique, sensational product’. Given that elBulli was generally only open from April to October, though, he wasn’t able to use it as much as he would have liked. Here, he had free rein to play with its complex aromas – and the first thing he did was to shave off a handful of generous slithers into a large wine glass for us each to return to smell throughout the meal.

Although truffle was incorporated into every dish, it was done so as an adjunct rather than the main component. Notoriously fragile, white truffles do not take well to heat, losing their aroma – hence they are used only as shavings with most dishes (unlike their more common, and cheaper black counterparts, which are more durable). ‘I’ve always considered it more a condiment than a solid food,’ said Adrià, ‘but it is enormously versatile.’

To prove the point, we had it first on a marshmallow with seaweed powder and salmon eggs; and on a lime meringue with tuna belly – fun, beguiling and somewhat disorienting. Then we had it on cured entrecote – silky, earthy and utterly divine. Then on red mullet with veal bone marrow – a mesmerizing mélange of flavours. And, to prove that it doesn’t stand heat, we had it first on foie gras and sea urchin (a more delicate foil to the rich flavours, and welcome bite to the otherwise slippery texture) and then again dipped in a foie gras consommé, which numbed the effect. Every course was accompanied by Dom Pérignon – either the 2006 or the ‘P2’ release of the 1998. ‘P2’ stands for ‘Second Plénitude’ – the wine having been aged for a further 10 years after the standard vintage release, and then disgorged before this second tranche. To my mind, the wine’s yeasty, autolytic quality worked better with the earthy umami of the truffle than did the more citric tones of the 2006, which provided more by way of contrast (welcome in balancing the delicate sweet potato gnocchi, not so good with the saltiness of the caviar with tuna carpaccio). Adrià says he has always favoured champagne with truffles for similar reasons – bringing out that umami flavour, but also because it is such a ‘clean’ wine that it acts as a palate cleanser too. ‘The truffle flavour is so strong, it gets inside your brain after a while,’ he said. Particularly when you have a glass of the stuff next to your plate throughout.

There were other wondrous concoctions: a milk crepe made from a sort of yuba, the thin film that forms on top of soy milk when making tofu, but in this case made from cow’s milk, and accompanied by black truffle gelatine, hazelnut oil and, of course, white truffle. The tuber was even there on dessert (a crisp puff pastry pancake filled with a thick Greek yoghurt foam that had taken on a sweet tang), adding further lustre. 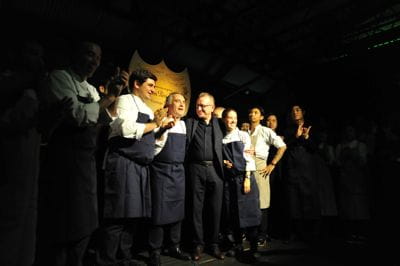 As he served up dish after dish (literally – we were being waited upon by the great man too) Adrià opened up on wider issues. Contemporary Chinese is the most exciting cuisine in the world today (‘young chefs are doing something totally different there – it will be huge’); Japan remains his inspiration (‘it has the most sophisticated, sensitive cuisine – in the west we are barbarians by comparison’); while standards have become so high in Europe that, conversely, innovation has been stymied (‘I’ve not seen anything truly innovative here for seven or eight years’). It was one of those evenings when you come away not just with taste buds tingling, but brain cells whirring. And in need of a good lie down.

Guy Woodward is a freelance journalist and magazine editor. You can follow him on Twitter @guyawoodward. He attended the dinner as a guest of Dom Pérignon.