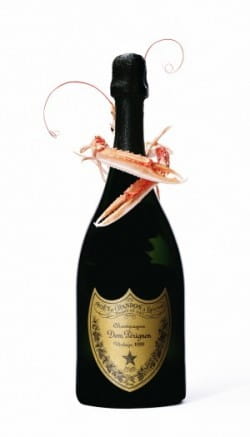 The launch of Dom Prignon 1999 in London the other day was the occasion of one of winemaker Richard Geoffroys’ legendary food and wine matching experiences.

This time instead of showing off a succession of vintages with variously aged pata negra hams, Heston Blumenthal’s molecular gastronomy or Japanese kaiseke cuisine as he has done in previous launches, he devised what he described as ‘the 7 sensualities’, seven different taste experiences to show off the one vintage. Here are my notes on the meal:

The scene is set, all black and white. Black table cloth and napkins, white bowls, black vases, white lilies. This is not a lunch as such says Geoffroy but a “unique experience befitting the theatricality of Dom Prignon 1999. We are going to go from one depth to another, from the marine dark to the apex of direct light. Chiaroscuro - light and shade - it’s a Dom Perignon world.” We Brits, unused to such purple prose, shift around in our seats and crack jokes to hide our embarrassment. Even Geoffroy giggles nervously.

*The first course arrives: a lozenge of Caviar d’Aquitaine placed on the intersection between thumb and index finger. This is the first sensuality - ‘a physical ‘mano-a-mano’ sensation’. We sit for several minutes, caviar on hand, respectfully listening while Geoffroy explains its provenance. Finally we eat - all in one mouthful of soft salty egg. The DP, which frankly tasted rather dull as an aperitif, suddenly bursts into life, tasting richer, fuller, deeper in flavour. We wipe our hands with the two (why two?) fluffy white flannels that have been deposited next to our place settings. Why are they dry rather than damp? Not sure what this is supposed to signify.

* Next a pewter-coloured bowl arrives. More caviar, this time placed on a small pillow of pea green foam which turns out to be avocado (a dish from top Australian chef Tetsuya that is reminiscent of the tea ceremony, Geoffroy explains). The avocado which is apparently just whipped up with water is light as air but rich and buttery and makes the wine taste lighter and more floral. “Is it silk? Is it satin on this occasion? I would even mention velvet . . .” rhapsodises Geoffroy. Whatever. It’s delicious.

* Three pottery bowls next, stacked in a tower. We are to explore ‘ three marine metamorphoses’ - three facets of iodine to illustrate the minerality of the wine. One contains a cold dashi broth with clams. Not terribly nice actually, more like kipper-infused water. It makes the DP taste quite sweet. Next a rock oyster with a squeeze of ginger juice (a wonderful idea. You simply grate the ginger and squeeze it through a cloth, I found out from the chef afterwards). This brings out the floral character of the wine and picks up on its own ginger note. Then finally a just-warm risotto of squid ink, decorated with gold leaf - a stunning looking dish and a stunning match bringing out all the elegance in the wine. (A clin d’oeil (nod) to chef Galtiero Marchesi, according to Geoffroy, or in other words, something to keep the Italians happy. They have apparently been miffed at Geoffroy cosying up to the Spanish with his last but one DP launch which was based on pata negra ham.)

* Next what turns out to be my favourite match of the tasting, a sensationally silky Thai coconut soup with langoustines flavoured with nam pla, lemongrass and limeleaf. I could eat this every day for the rest of my life. Preferably with Dom Prignon. “We are now going to lie on the beach, looking at the sun. It’s like feeling the sand running through your hands” burbles Geoffroy. Hmmmm. Wonderful anyway. (Make note to self. Coconut and champagne is a sublime match.)

* Some black lacquered bowls arrive with pointy lids (no doubt designed for the occasion. How much is all this costing?) Inside is a shot of grenadilla, a south American fruit that tastes like a cross between a pineapple and a passionfruit. Geoffroy instructs us to down it in one. Impossible! It’s too gloopy, too seedy. It apparently reflects the pineapple flavours in the wine but I don’t really get it. Just makes it taste rather austere and somehow fizzier. Odd.

* Another highspot. A plate of very finely sliced culatello, the ultimate in prosciutto, with fabulously rich, piggy aromas. It’s sweeter and fruitier than jamon iberico, hitherto the best ham I’ve tasted. ‘Positively Rubenesque’ as Geoffroy describes it. It again brings out the fruitier flavours of the wine. That’s our meat course.

* Another langoustine with a dark smear of . . . what? We are travelling, apparently to Mexico, Geoffroy’s new passion, so it must be mole. We eat it with a pronged spoon called a georgette (why?). It’s beguilingly dark and smokey. Geoffroy arranged for an authentic black mole spice blend to be imported especially for the occasion from Oaxaca. Why didn’t he just go the whole hog and fly us all out there . . . ? The DP miraculously ages 10 years in a mouthful, tasting opulently rich.

* Finally, more mole, this time thick and rich, coating barely cooked slices of pigeon. “We felt it (the wine? the mole?) was screaming for blood” my notes record Geoffroy saying. Improbable. I can’t believe this match will work, the mole is so dark, coffee flavoured, chilli-spiked but incredibly the DP hangs on in there, its freshness intact. Oddly, we are back in the same register of flavours I found with the caviar. “This is your dessert” says Geoffroy, having the last laugh. “Pigeon belle helene.”

What on earth to make of all of this? These events pose as many questions as they answer. Would anyone actually want to eat like this and if not how useful is it as an exercise? If a wine needs to be explained to be appreciated can it really be considered great? Does being plied with DP distort your judgement and wear down your defences? (Almost certainly yes to the latter question.)

What it is fair to say - a sober six days later - is that DP is an extraordinarily clever wine made for modern tastes which bursts into life regardless of what food you serve with it. Consciously made without tannins or without the autolytic (yeasty, biscuity) character that is typical of grander champagnes, it is, as Geoffroy puts it in his hyperbolic style “a living paradox in many ways: intense then complex, dark and yet luminous, mature yet fresh and vivacious.”

No winemaker that I’ve met thinks about the impact of food on his wine more than Geoffroy or can conjure up such intensely delectable matches. The event had been 18 months in the planning “the normal time before release we start to think of the hedonistic angle.” As a marketing exercise it is sheer genius.

DP may not be - is not by any means - the world’s greatest wine, as Geoffroy would like to suggest, but with its clear, piercing intensity it is the perfect all-purpose wine for the 21st century globetrotting gourmet. And I guess Geoffroy would be pretty happy with that.