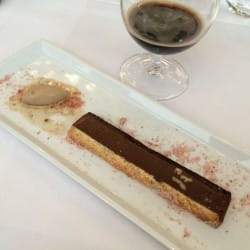 A recent lunch hosted by the Brewers' Association of America at the innovative Club Gascon in London revealed the strengths and weaknesses of beer in a fine dining environment. It certainly added to the excitement of the experience but sometimes seemed too much of a sensory overload.

The standout dish for me was the dessert - a clever riff on millionaire’s shortbread incorporating coffee as well as chocolate and ‘frosted Worcestershire’, a deeply savoury Worcestershire sauce sorbet which was fantastic with a marvellous 9% North Coast Old Rasputin Imperial Stout. (Less so with a 7% Heretic Chocolate Hazelnut Porter which got rather engulfed by the dessert but worked really well with the chocolate petits fours which were served at the end of the meal.) The chef, Pascal Aussignac, was particularly good at introducing bitter tastes into his dishes for the beers to latch on to. 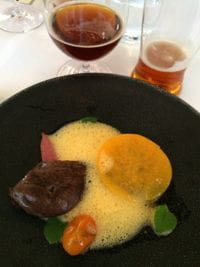 I also loved his main course of wood pigeon with orange, barigoule and glazed kumquat which brought in some bold orange flavours that I thought worked brilliantly with a 6.7% Smuttynose (great name for a brewer) Old Brown Dog brown ale though it proved a little too pokey for the 4.7% Stevens Point amber lager that was also served. But I think it would have been just as difficult for most red wines to stand up to it*.

There were a couple of courses however which I thought wine would have worked better than beer. The first course of oysters with apple, seaweed and black tea tuile had been tweaked from the usual foie gras version on the menu which certainly helped the pairing with a 4% Bell’s Brewery Oarsman German-style ale but I’d have still preferred a glass of crisp white wine such as Chablis. And a devastatingly rich cappuccino of black pudding, lobster and asparagus quite unbalanced the accompanying IPAs - Founder’s Centennial (7.2%) and Lagunitas (6.2%) - making them taste far too sweet. We really needed a drink with more acidity - again a white burgundy or rich chardonnay would have been a better choice, I think. 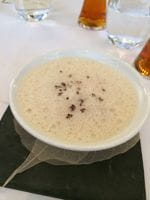 The other course of ‘silky duck flan’ with ginger and hay jus turned out to contain foie gras to my discomfiture but although I don’t normally eat it I couldn’t resist trying it with the beers. Here the sweetness of the two American pale ales - a 5% Deschutes Mirror Pond and Boulder Beer’s Hazed and Infused (8%)- worked surprisingly well - maybe because the hay introduced a bitter note and the ginger a slightly spicy one that supported the match. Foie gras and American IPA? Worth exploring if you eat it.

Anyway, all credit to the Brewers’ Association for deciding to show their members’ beers in such a challenging context. I don’t blame brewers for trying to get beer seen as more than a partner for pub or Indian food but I’m not sure that the elaborate presentation of the typical French - or even Italian - starred Michelin meal really does it a service.

There’s so much going on in a glass of craft beer that elaborate food sometimes seems a distraction. (The same is true of expensive bottles of wine which are often better paired with simple home cooking.) It seems better suited to casual restaurants like St John’s or Lyle’s where the focus is on ingredients rather than chaffy technique.

What do you reckon?

I attended the lunch as a guest of the Brewers' Association. 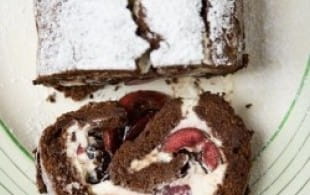 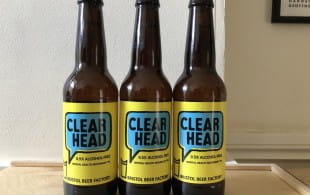