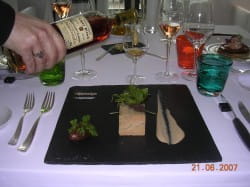 This was to be one of two visits I'd make in as many year to this one Michelin star restaurant. Located in the heart of Cognac country just off the Cognac-Jarnac road and along the sleepy Charente river, La Ribaudière carries a definitive list of cognacs to attract clients from the area’s number one business.

That would be enough but La Ribaudière takes it a step further. Over the past six years chef/owner Thierry Verrat and sommelier Olivier Chapuzet have made exceptional efforts to pair cognacs from its over 230 bin list with food. Head barman Nicolas Pernes, finalist for the 2006 French Barman Competition, has recently begun walking the boards and fashioning classic and contemporary drinks. Verrat’s wife, Patricia, runs the front of the house, welcoming all her guests.

La Ribaudière has recently undergone a remodeling and rejuvenation. Its new, minimalist menu logo reflects its location alongside the Bourg-Charente bridge and its decor the modern styling the drink enjoys internationally. Its former classic French stuffiness has been dramatically redefined with a near-bling atmosphere down to the choice of music and lighting. Even the landscaping between the terrace and the river has been adjusted appropriately. I admire the modern creativity in the toilets but it requires too much work to understand at a time when one would rather not be so engaged. All said not so jarring for this city boy but fairly far gone for the likes of Cognac's country folk.

Sommelier Chapuzet has been here 18 months. "I was born here near Frapin's Ch. Fontpinot and every job I've held I've worked closely with cognac. In other regions I would serve it well-chilled with raw fish. A corollary is the pairing of gravadlax with aquavit as in Scandinavia. Chocolate, coffee,and anything with a sweet base or sauce is fair game for cognac." Curiously he doesn't water the drink for service saying that, "it's too noble a product for this. Still, lower quality levels such as younger VS or VSOP may be diluted for greater pleasure. Many years ago cognac was served with water so as to make it easier to drink but not now." Tasting for the first time Ch. Fontpinot's just-released 20-year old 1986 vintage, Chapuzet said it's a special drink for a midday aperitif or perhaps with a tarte tatin. We drank it alone.

Seated upon its large outdoor terrace, my companions and I relaxed while watching the efficient but good-humoured maitre’d usher his first guests to their table. First up for me was a Prunier sour cocktail. The pear notes from this VS Cognac peeked through vivacious fresh lemon in this perfectly made aperitif. The hand-formed, crusty bread rolls that hit the table shortly thereafter, with an amuse of smoked salmon croquette and seafood gazpacho topped with whipped cream & basil oil, provided ballast for the extravaganza to follow. Birds chirped away, pleasure boats slowly cruised by, and the scent of cigars from nearby tables wafted along the gentle river breeze.

A melon soup with hazelnut oil brought an unexpectedly earthy synergy between these two ingredients which, had one been forthcoming, would have paired nicely with a young, fruity VS.

The first course off the set menu was an iced Remy Martin VS Petite Champagne Cognac with a timbale of tartare of sea bass in olive oil with a lemon, vanilla, and sweet pepper sauce. The richness of the fish & oil tamed the wild youthfulness of the spirit, accentuating the vanilla tone of the sauce. The tiny bits of raw herring which topped it all brought out what little spice there was. A beetroot extract dotted the perimeter, lending a bit of colour to the dish. The fish was exceedingly fresh—a scale was discovered. As the drink warmed in the early summer evening the notes of chocolate, caramel, and alcohol notes increased from the drink. Next was a sizeable block of foie gras dusted with chocolate powder with fig jam and a concentrated balsamic mousse. With the two added touches it paired well with the Frapin Cigar Blend; without it was disharmonious.

With so many beginnings to this meal it was now time to switch into higher gears and begin to pair two cognacs with each dish. A chilled Remy Martin Extra was paired with langoustines in saffron. When asked about this dish Chapuzet shared that the dish was adjusted to this cognac by the addition of more saffron than usual to accommodate the drink’s spicy character. The dish was velvety, naturally salty and lay upon a steamed spinach bed. The food reined in the richness of this Cognac and a Léopold Gourmel Age d’pices also added dimension if tasted along with the accompanying fennel frond. The effort to pair this with the Remy showed.

My ‘la Chinoiserie d'huitres speciales quelques pousses au curry de Madras' was lovely alone and a surprising pairing with the Gosset Grand Rose champagne. While I thought it'd be too fruity for the dish, the cream base of the curry sauce reined in the fruitiness of the bubbly.

The centerpiece of the meal was paired with a chilled Frapin XO and a '98 St. Chinian Clos Bagatelle. The 'la poitrine de pigeonneau roulee au lard de Bigorre' slightly overwhelmed the wine, dense as it was, while the cognac held its own without adding anything special to the pairing. It took a few hours but by then my palate eventually adjusted to the increased alcohol load.

Three wedges of Roquefort cheese with prune/walnut jam followed, accompanied by a Remy VSOP. It was all very harmonious save the finish which felt very spicy and alcoholic due to the sugar in the jam. Some Extra from the langoustine course was leftover, its rancio character only now emerging. For those with a nose for more cheese an imposing 3-tiered trolley containing over 40 selections is available. From it I chose four locally made goat cheeses of varying quality with what was described as the 'granny' cheese far and away the best.

Back to two drinks with a course, the Remy XO made its reappearance along with a Jean Fillioux Reserve Familiale. The nougat glacé topped with fresh fruit with a side of coffee granité acted as a foil. The Remy’s leathery barrel notes came to the fore while the Fillioux’s spice and rancio qualities took the stage. The granit drove the coffee-like barrel notes on both cognacs.

The meal concluded with a Ragnaud-Sabourin Grand Cru Cognac and Partagas 8-9-8 and Cuaba Divino cigars with a perfect cup of Jamaican Blue Mountain coffee.

You needn't drink cognac throughout any meal but, if you're so minded, La Ribaudière is probably the best place in the world to do so.

A native of Santa Cruz California, David Furer is a former sommelier who now writes regularly about wine. He is also an experienced international wine judge. 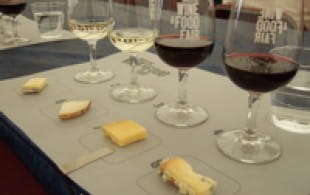 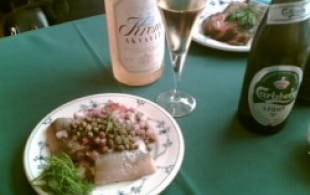