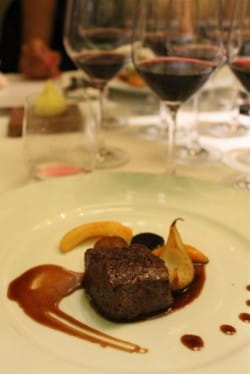 Pontet-Canet, which is a fifth growth and one of the largest estates in the Médoc, is located in the heart of the Pauillac appellation and is one of the pioneers of biodynamic viticulture in Bordeaux.

We began with the 1990 vintage – deliciously mellow and cedary, but still with plenty of dark berry fruit with fig nuances and silky on the palate. Opening up in the glass, it became increasingly fragrant, almost incense-like. Not an obvious choice for canapés, but surprisingly good with gougères, foie gras with raisins and a tangy vinegar dressing, and deep-fried ravioli filled with spinach and ricotta.

Our first course, hand-dived sea scallops with parsnip, Jerusalem artichokes and salsify, was served with the 1995 and 2000 vintages. The scallops had been seared and were nicely caramelised and the root vegetables really flattered the wines.

I felt that the 1995 had the edge with this course as the tannins were more integrated and the overall effect was more refreshing and aromatic – seductively fragrant and appetising. The 2000 was a more youthful wine – sleek, with a cool minerality and complex dark fruit. It’ll continue improving for many more years. 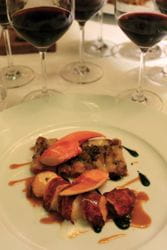 Then came Scottish lobster with macaroni ‘au gratin’, Comté cru 2009 and the 2001 and 2003 vintages. The 2001 was lean, upright and appetising. I’m particularly fond of this vintage in Bordeaux for its more classic, restrained style. The 2003 was quite a different beast – broader, dense and sweetly ripe, but with a refreshing structure and haunting minerality. The finish was notably warmer than the 2001.

They both paired with the well flavoured lobster, the fine tannins complementing the meaty texture. The mature cheese in the gratin also loved the wines and I think the dish also included mushrooms which added a balancing earthiness. The lush ripeness of the 2003 had a sexy decadence, although the firmer structure of the 2001 had a cleaner effect on the palate. Both were great.

This was followed by a particularly autumnal dish – saddle of venison Grand-Veneur with pumpkin, beetroot and quince and the 2007 and 2008 vintages. The 2007 had charming fragrant berry fruit and sufficient tannic grip for the medium-rare meat. The 2008 had more breadth and a warmer, spicier finish. This wine had a larger than usual proportion of Merlot. The flavours and textures of the dish worked beautifully with these youthful wines, particularly the beetroot. (Beetroot and fine, delicately balanced red wines have a happy affinity.)

The final pair of wines, a youthful 2009 and 2010, were served with truffled Brie de Meaux. These were a treat. The 2009 lush and exuberant, while the 2010 was slightly more classic in style and a little firmer. Both wines had a viscous quality: the sleek ripe tannins melding unexpectedly well with the creamy texture of the Brie. The truffle added a complementary layer of flavour to the already breathtaking aromatic spectrum of the wines: pure vivacious berry fruit, cool minerality, subtle smokiness and sweet exotic spice. Delicious.

As of the 2010 vintage, the château is certified biodynamic with Biodyvin (it had been for 2006, but forfeited it in the wet 2007 vintage by spraying – something Tesseron says the estate has regretted ever since).

After such a great array of wines, we concluded our lunch with Alain Ducasse’s signature deconstructed rum baba, but with Tesseron Cognac instead of rum. The Tesseron family have been owners of a Cognac house since before acquiring Pontet-Canet, so it was a fitting end to the meal. We enjoyed the Tesseron Cognac XO Perfection, Lot no. 53, based on the 1953 (and the address of the Dorchester Hotel is 53 Park Lane). Boozy and decadent – it would be great to keep recreating babas with different spirits (I’d love to try one with a peaty malt whisky!)

Each month Alain Ducasse at the Dorchester will be showcasing a range of France’s grands crus. The restaurant is currently offering diners two vintages of Château Pontet-Canet, (2004 and 2001) by the glass (£25), 37.5cl carafe (£75) and bottle (£150).

They are also organising grand cru wine-tasting dinners from £220 per person with events planned for February and April 2013. Visit www.alainducasse-dorchester.com or call 020 7629 8866 for further details.

Lucy Bridgers attended the lunch as guest of Alain Ducasse at the Dorchester and Château Pontet-Canet. 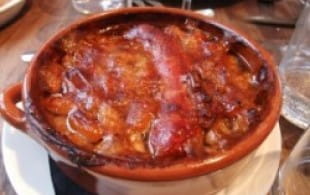 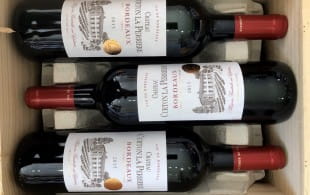 The expertise shines through. Thanks for tikang the time to answer. 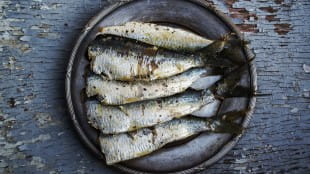