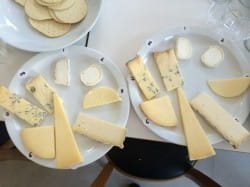 The theme of the event, which was held at Birch restaurant as part of the Bristol Food Connections festival, was to explore the differences between unpasteurised and pasteurised cheese but we thought it was also a good opportunity to re-taste some of the farmhouse ciders that had been featured at the Cider and Sausage festival the previous weekend.

As Dan Saladino of the BBC's Food Programme was recording the event I won’t say too much about how the cheeses went down (fascinating) but thought you’d like to know a bit about the pairings and the crackers we matched the cheeses with, which came from the Fine Cheese Company. (Oh yes, there is an art to cracker matching ;-)) 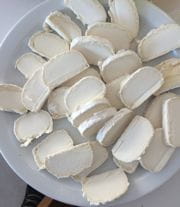 The first round was two Ragstone goats cheeses from Charlie Westhead of Neal’s Yard Creamery in Herefordshire with which I paired Tom Oliver’s delicate traditional medium dry perry (pear cider) from the same county. Perry is often compared to a white wine in its effect on food and so it proved. You can just as easily pair a perry with goats cheese as a sauvignon blanc.

The next round was two caerphillies - a Gorwydd Caerphilly and a pasteurised Caws Cenarth. I think the perry would also have worked here too or a dry cider but I went with two medium ciders I’d tasted: Copse House from Dorset (I think the Landshire medium) which was clear, fresh and appley (well, it would be, wouldn’t it?) and the slightly sweeter Blindfold from Blaengawney cider which I discovered is actually made in Caerphilly in South Wales. Both were 6%. Medium farmhouse ciders are generally quite a bit less sweet than ones made by larger, more commercial producers so neither was too cloying. 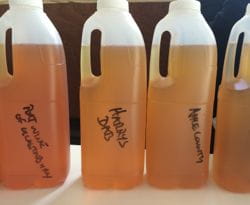 Our two cheddars - a Montgomery and a pasteurised Fordham Farm - were both quite full-bodied so needed a slightly fuller, richer-tasting cider. I lined up another Welsh cider from Apple County in Monmouthshire - again, I’m not sure which one as it came from an unmarked container - and the slightly tarter Harry’s single varietal Dabinett which was particularly good with the Montgomery. (Again both come from the same county, Somerset, but at 4.5% the Harrys Dabinett was slightly lower in alcohol than the previous ciders).

Then finally two blues - a Cropwell Bishop Stilton and a Stichelton (effectively an unpasteurised Stilton) with I matched with two sweeter ciders to mimic the effect of a fortified wine: Hecks medium sweet Port wine of Glastonbury and Millwhite’s Rum Cask which, as the name suggests, is matured in rum casks. Both come from Somerset. 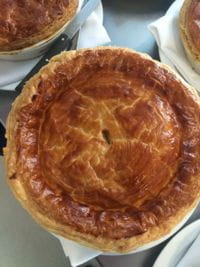 After the tasting we sat down to a cider and pie lunch - a Gorwydd caerphilly, potato and onion pie baked by Sam Leach of Birch - and drank Sam and Becky’s own homemade unpasteurised cider. And with the copious leftovers we cracked open a 2013 Dunkertons Organic Vintage cider (7.5%) which also matched it perfectly. Cider is a great pairing for traditional British cooked cheese dishes like pies and pasties (though not for a lasagne, I’d venture)

Matching artisan cheese is a tricky enterprise because every cheese is different and many ciders are too depending whether they’re bottled or in cask but I think if you stuck to these broad styles you should enjoy the results. The combination of perry and goats cheese and sweeter ciders with blue cheeses was particularly successful. With milder pasteurised cheeses you’ll find you don’t need such strong, characterful ciders.

Many thanks to Birch for hosting the event, The Fine Cheese Company for donating the cheese and crackers, and Bristol Cider shop for supplying the ciders. They won’t have all these in stock but have a regularly changing selection sourced from within a 50 mile radius of Bristol. 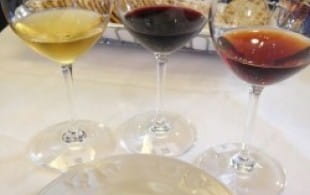 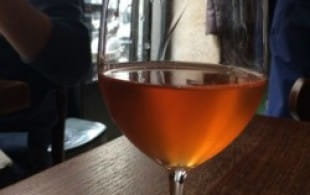 Dear Fiona, may I ask you for your opinion and advice - what cheese would you pair with french brut cider?? Thank you very much! Iveta