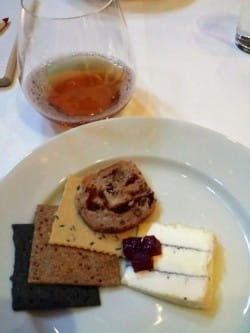 "I won’t say I’m a tea novice. I drink it every day. For me it’s strong, it has milk, it has two sugars and it’s served in a mug. If you’re going to serve it with food, then it better be a fry-up or a digestive biscuit.

Don’t get me wrong. I dabble with green tea occasionally, I drink camomile during harvest and I’ve even been known to flirt with something more exotic like Earl Grey.

Being invited to review a tea and food matching dinner hosted by Lalani & Co at The Boundary, seemed like just the occasion to buck me out of my comfort zone and teach me something.

Lalani & Co are a young company set up by three brothers, Jameel, Nadeem and AK who describe themselves as curators of some of the finest tea gardens and harvests around the world. They work with boutique estates in India, Nepal, Japan, Taiwan and Hawaii to produce highly individual small lot teas, that reflect both terroir and vintage.

All the teas were brewed by the Lalani brothers to their precise specifications (details at the end), and served in Riedel ‘O’ glasses.

The dish combined the sweet and umami characteristics of the ham with the fresh green flavours of the broad beans and asparagus. The dressing had a noticeable sweetness and sharpness.

On the nose the tea was redolent of truffles and honey and as it cooled more fruity characteristics came out.

The match didn’t work for me. I felt the tea was over-brewed, leading to a astringent and bitter palate that became even more prominent when tasted with the food. While the match itself was not successful, it did serve to show the nuances and complexity that tea can have, especially as it cooled down. 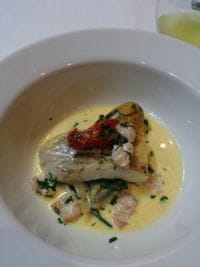 Next up was a dish of turbot, squid, samphire and artichokes served in a cream sauce which was served with Okumidori Sencha 2013, Nakai Family Gardens (Kyoto, Japan). The sencha is shade grown, which is said to increase the amino acid content and hence the umami characteristic of the resultant tea.

On the nose, the tea had a floral, jasmine note with some broad bean and a definite underlying meatiness and again, as it cooled down, more fruity characters emerged - in this case a definite peach flavour. On the palate the fruitiness came through and it reminded me somewhat of coconut water.

This was an absolute hit. This tea was only lightly tannic and when drunk with the dish the flavours of both were lengthened. As it cooled down, it seemed to increasingly refresh the palate, but in no way detracting from the food.

The third course of Brillat Savarin aux truffes served with Lakyrsiew Winter White 2010, Lakyrsiew Garden (Meghalaya, India). The tea had a fascinating aroma of dried roses, honeysuckle, sandalwood and an underlying roasted character (from the ageing, I was told). I could have sniffed my glass for hours.

I’m afraid this match didn’t work for me either. There was nothing conflicting between the two elements, it’s just that neither really brought out anything more in the other. 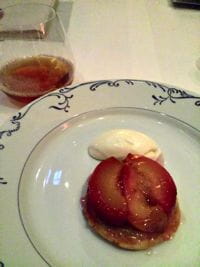 The final course was a peach tarte tatin with a thyme ice cream, served with 2nd Flush Grand Reserve 2012, Makaibari Garden (Darjeeling, India). The tea had notes of barley and raisins on the nose, and a forest floor woodiness on the palate backed by moderate tannins.

More of a curate's egg match, this. The acidity in the dessert made the tannin in the tea much more apparent and slightly unpleasant whereas with the thyme ice cream, the tannins seemed to disappear, leaving a pine forest character.

I suspect the numbing effect of the cold was what led to the reduction in the perception of the tannins. I can’t help thinking that this tea would have been a better match with a spoonful of sugar and a slice of lemon (but I am a tea heathen).

So, overall a mixed bag. All the teas were fascinating drinks in their own right. The way they changed in the glass was similar to how a wine changes over time.

In the future if there was a tea matching component as part of a meal, then I would take it without hesitation though I am not yet convinced that a full meal can be paired completely with different teas. Having said that, the Lalani boys did point out that this is new area for them too and with every dinner they understand more about the principles and limitations. Given time, I have no doubt they will have honed their matching skills.

A Condrieu (or Viognier from Ardeche as a more budget choice)

Nayan attended the dinner as a guest of Lalani and Co

Nayan Gowda is a former chef and wine consultant and, coincidentally, the subject of a recent profile by Jancis Robinson. He tweets as @vinosity. 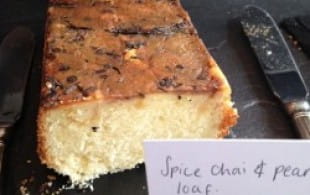 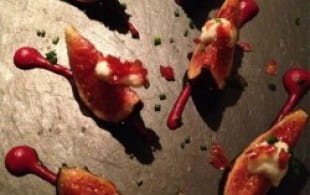 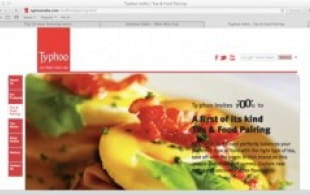