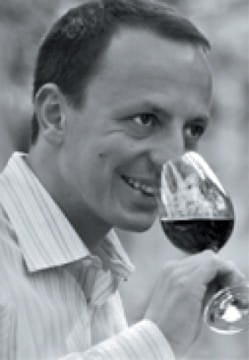 At the age of 31 his eponymous Paris restaurant already has a Michelin star after being open for just six months and he’s opened another in the smart ski resort of Courchevel. Even his CV up to then is impressive - best sommelier in Italy at 20, head sommelier at the Georges V (where he spent six and a half years) at 24, the youngest ever Best Sommelier in the World at 27. Oh, and he’s written a couple of books including a massive 500 pager of tasting notes on the wines of the Mediterranean Mes Vins de Méditerranée.

On top of all this he’s come up with a really neat idea which is to open a restaurant where the food is dictated by the wine. You choose what you want to drink, the chef decides what you eat. There’s an a la carte menu of some 13 wines (prices include an accompanying dish) and 6 set menus which range from a lunchtime menu en vitesse at 50€ to a no holds barred evening prestige menu at 1000€. Does anyone actually go for that? “In the six months we’ve had 30 people taking it. We’ve sold more Petrus here than I did at the Georges V.” Bernardo laughs.

The idea behind the concept, he says, is to give customers the opportunity to explore the wine world with simple, straightforward Italian food. A lot of top restaurants have big Bordeaux and Burgundy lists and luxury ingredients like foie gras but people are looking for different experiences. Don’t people want to know what’s on the menu though? He shrugs. “When you go to dinner at someone’s house you don’t know what you’re going to eat and drink. People discover the quality of the food is good here. They don’t worry about it.”

The menu and wines change every week depending what produce is in season and Bernardo’s current vinous interests. “We hold a regular Friday morning tasting where we taste 12 dishes and 12 wines. Bernado who also trained as a chef comes up with the suggestions. His chef Davide Bariloni creates the dishes. “We go with the initial idea in 60-70% of the pairings. In 30-40% Davide changes the sauce or the garnish. I change my ideas all the time. My idea for the next couple of months is to offer one wine with two different dishes.”

My husband and I road-tested two of the lunch menus recently - the four course ‘a l’aveugle’ blind tasting menu (75 €), an elaborate version of the options game where you know neither the wine or the food you’ll be getting and a five course La France du Nord au Sud tasting menu at 180 euros which started off with a . . . er, Franz Hirtzberger Gruner Veltliner Honivogl, an excellent match for a carpaccio of sea bass but hardly French. “What happened there?” I asked Enrico. “I’m Italian” he shrugged as if that explained everything.

Although the longer menu offered three outstanding matches (the Gruner and bass, a risotto with morilles with a 2005 Ballot Millot Meursault Les Criots and a Domaine Gentile Patrimonio Rappu with tiramisu Bernardo committed the cardinal sin (in my book) of pairing a tannic young red Bordeaux (a 2004 Loville Las Cases) with a Reblochon, offset only by a slice of fig bread. It was a predictably appalling match. I was curious about this as on the la carte his pairings for cheese included the much more contemporary matches of a 1996 Pichet Chateau Chalon from the Jura, a Duvel beer and a 1989 Rivesaltes and Bernardo’s own preference with a cheeseboard, he admits, is for vintage blanc de blancs champagne. Pressed, he conceded that his predominantly French clientele expected red with cheese and a wine of this calibre in a menu at this price.

The blind tasting menu, which my husband took, was better value both from a financial point of view and in terms of entertainment value and I freely admit that Bernardo got the better of us. We mistook an uncharacteristically rich Bourgogne Aligot from J M Boillot (well paired with a Jerusalem artichoke soup with a balsamic vinegar drizzle) for a South African chardonnay and a heady 2005 Domaine Courbis Saint Joseph (served in a black glass with a dish of lamb and Mediterranean vegetables) for a Malbec. (We should have known an adopted Frenchman would stick to French wines) We more or less hit the spot with a Bernard Gripa 2006 Saint-Pray (perfect with oriechiette with spring vegetables) which we correctly identified as a Rhone white and a Montlouis Moelleux from Chidaine (gloriously paired with fresh mango and raspberries) as a Loire dessert wine.

Interestingly there were no Italian wines. Why, I asked Bernardo? He shrugged again. “Basically I prefer Italian red to Italian white. My favourite wine regions are Burgundy and the Northern Rhone. At home I drink wines like Saint-Aubin, Crozes Hermitage, Cote Rotie, some Barbera d’Alba. Not Bordeaux - it’s too expensive.”

“I’ve noticed a move away from powerful wines like Amarone and Shiraz that are impossible to drink at table to wines with more elegance and lightness, especially at this time of year. In spring I look more to Austria, Germany, New Zealand and South Africa for interesting whites.”

Compared to the master of food and wine pairing Alain Senderens who I’ve mentioned before on these pages. Bernardo’s matching menus are less painstakingly conceived and less refined but Il Vino is a more relaxed experience - a bit like a very classy, designer wine bar although Bernardo is reluctant to categorise it as that.

“In France there are different types of restaurant - brasserie, bistro, gastronomic. In Italy there are just restaurants. We are a restaurant with fresh seasonal food a nice wine selection and good service. Not sophisticated just comfortable.”

“Too many industry professionals go in for a competitive approach with long explanations for every dish. My view is if you want a spectacle go to the theatre. People are going more and more for simplicity.”

It’ll be interesting to see how well Il Vino does once the novelty of the concept wears off or whether Bernardo will have to revert to a conventional menu. In the meantime this ambitious young wine professional already has his eye on further expansion. In Italy? “No! I love Italy but I’d never work there again. Maybe London . . . Or maybe I’ll go back to the kitchen one day.”
Maybe. With Bernardo I suspect you can never rule anything out.

This article was first published in the July 2008 edition of Decanter.