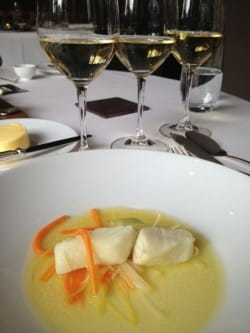 Klosse who runs his own luxury hotel and restaurant, De Echoput near Apeldoorn in the east of Holland is an expert on food and wine matching with several books to his name and is a professor at two Dutch universities.

His theory is that you should look for two main things when you devise a wine pairing: whether the dish and the wine have a contracting or coating effect on the palate (salty and sour tastes, causing the palate to contract, sweet and fatty flavours, coating it). And whether the dish is flavour intense or not which is self-explanatory.

He lined up three white wines which were served blind so as not to give us any preconceptions. One was crisp and fresh, one smooth and subtly oaked and one rich and weighty, coming into his flavour-intense category

First we were served a simply cooked piece of halibut served with carrots, leeks and a delicate saffron-spiked poaching liquid. It paired perfectly with the crisp white, made the second wine taste slightly clumsy and the oaked wine overpowered it completely. We added a sprinkling of chopped gherkin but that made the crisp white taste simpler and more lemony.

Next the fish was served seared with a light butter sauce which made the dish quite a bit richer. This time the first wine tasted slightly thin, the second, lightly oaked wine much more elegant and graceful but the third was still a little overpowering. 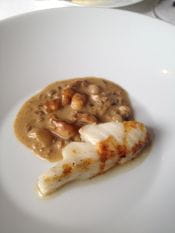 Finally the fish was served with a rich creamy mushroom sauce - an opportunity for the third full-bodied white to shine. The second lightly oaked wine also showed well - it would be a matter of preference which was the better pairing but the first wine tasted positively thin by comparison.

He then told us what the three wines were which was just as much of a revelation. The first surprise was that they were all chardonnay - and French. Two, the first and the third, from the same Languedoc producer Vincent Pugibet of Domaine la Colombette. The first wine a low alcohol chardonnay called Plume that is only 9% and the last a rich 2010 chardonnay called Demi-muid. The second wine was a 2009 Macon Bussières from Domaine de la Sarazinière, Cuvée Claude Seigneuret

As a final party trick Klosse then served a braised dish of beef with cloves and a hazelnut purée with a 2010 Beaumes de Venise Terrisimo then asked us to taste the final white - the rich chardonnay with it as well. I disagreed with him that it was the better match - there’s something about stews that calls for red wines in my view - but it was a clever play on the spices in the dish and did work remarkably well.