If you think the French always favour wine over beer to accompany their meal, think again! Craft beer is on the march and nowhere is this more evident than the traditional wine territory of France.

In 1975 there were 23 breweries in France but this had risen to over 500 at the start of 2016. There is a groundswell of interest in craft beer and a new generation of gastronomes is discovering the complementary kinship between beer and food.

The third Paris Beer Week is currently in full swing and who better to spread the word about global craft beer trends and beer and food pairings than the pioneers of the craft beer movement itself – America’s small and independent craft breweries, as represented by the Brewers Association, who are currently in Paris to show the diversity, innovation and quality of American craft beer.

To demonstrate beer’s worthy place at the dinner table, they organised an exclusive beer and food pairing dinner showcasing the world’s most popular beer styles alongside the cuisine of acclaimed chef Edward Delling Williams (formerly of Au Passage).

Hosted by Florent Ciccoli at Parisian neo-bistrot Jones, the menu was a collaboration between Edward Delling-Williams and the Brewers Association’s Executive Chef, Adam Dulye, who is himself one of the world’s leading exponents on matching beer and food. The result was a five-course/10 beer feast of glorious flavours that left an indelible impression on the palate of those of us lucky enough to be present. 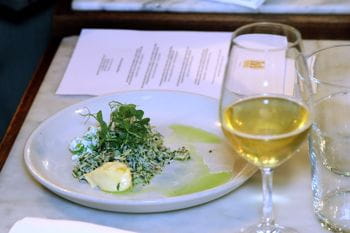 The evening began with a fresh crab, pea and home-made labneh salad with pea oil paired with Great Divide Collette Farmhouse Ale (7.3%) and Boulevard Tank 7 Saison (8.5%). The lightness of the dish perfectly complemented the crisp, delicate citrus notes of the saisons with each beer bringing out different nuances in the food – the Colette enhanced the minerality of the crab and the Tank 7 had a lovely dry finish.

Adam Dulye explained that the beer styles for the courses ahead would begin on a light note and intensify in hop character as the pairings progressed. He assured us that even after five courses and ten different beers our palates would not be fatigued and that we could leave Jones, walk into a bar, enjoy a beer and not feel satiated. (There were a few wry smiles at this remark, but it proved to be true!).

Next up was a smoked mackerel gratin and foccacia stuffed with smoked mozzarella and home-made butter accompanied by Sierra Nevada Pale Ale (5.6%) and Oskar Blues Dale’s Pale Ale (6.5%). This was truly a match made in heaven. The mackerel was cooked in a creamy rich béchamel sauce with parmesan and perfectly balanced by the hoppy, subtle malt notes of the pale ales. They cut through the richness of the dish to leave the palate feeling clean, refreshed and ready for the next mouthful.

IPAs - the rockstars of the craft beer world

We then moved on to IPAs, the rockstars of the craft beer world, with a dish of beetroot braised cuttlefish, beetroot, blood orange and bacon fluff paired with Coronado Stingray IPA (7.9%) and Maui Big Swell IPA (6.8%). The cuttlefish was cooked sous vide and marinated in blood orange to provide acidity. 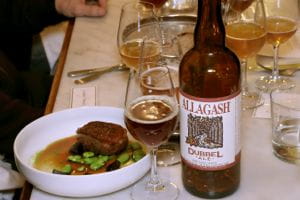 Adam explained that IPAs balance the palate in two ways – by cutting through fat and by counteracting acidity. The latter pushes the hops to the roof of the mouth and allows all the flavours in both the food and the beer to be tasted. The bacon fluff followed by a slurp of Coronado Stingray was a moment of epiphany. Salty, smoky, bacon tempered by the tropical fruit flavoured hops teased out the sweetness of both. IPA is the most popular beer style in the States and it is easy to see why this big, bold, beast of a beer style goes so well with food.

Then came a quite incredible combination of slow roasted pork belly, black garlic and fava beans (above) with Allagash Dubbel (7%) and Saddle Bronc Brown Ale (5.4%). The soft, smooth Dubbel with its plum, dried cherry and nutty flavours cut and complemented the richness of the pork perfectly while the Brown Ale with its hoppier, maltier, roasted nut flavour notes enhanced the sweetness of the black garlic.

Why craft beer goes so well with grilled food

Adam told us about the Maillard reaction – a chemical reaction between amino acids and reducing sugars that produce a wonderful searing flavour as found on the pork belly crackling. The same reaction occurs in making toast or roasting barley hence the natural kinship between craft beer and seared (or browned) food, particularly protein. 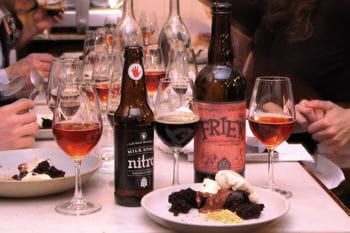 And finally to dessert. Adam chose two beer styles for this course – smooth, velvety Left Hand Nitro Milk Stout (6%) and barrel-aged Odell Friek Sour Ale (6.5%) which had been fermented with cherries and raspberries, teamed with stout cake and chocolate with a malt ice cream. The deep roasted chocolate flavours of the stout boosted the chocolate in the cake while the burst of sour tartness from the Friek left the palate cleansed and refreshed.

Where to drink craft beer in Paris

The Parisien craft beer scene started around 2012 with the opening of its first craft brewery, La Brassiere de la Goutte d’Or and there are now five craft breweries producing everything from saisons to pale ales, IPAs to brown ales. The best craft beer and food venues are on the east side of Paris and include La Fine Mousse, Bar Martin and Les Trois 8 amongst others.

Judging by the reaction of fellow guests at Jones, France looks set to embrace the growing global craft beer trend, along with the rest of the world!

Lotte Peplow is a London-based PR and craft beer enthusiast with a passion for all things beer- and food-related. She works for the Brewers' Association and attended the dinner as their guest

If you found this interesting read beer sommelier Sophie Atherton's piece about Italian beer and food matching at Tozi. 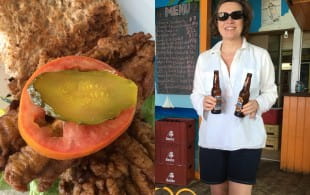 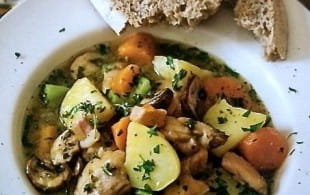 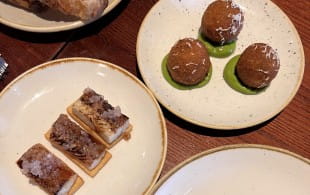