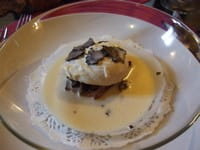 I came across this article the other day which I wrote 4 years ago after a visit to Chablis. We attended two great dinners organised by Daniel Defaix and Herv Tucki of La Chablisienne which were an object lesson in how to pair Chablis with food. I thought it deserved a re-run.

"Last week I was in Chablis and had two amazing meals which showed off the accompanying wines to perfection. The common factor was that neither was at all elaborate - in fact they couldn’t have been simpler. But the ingredients and flavours were chosen with great care

The first was a lunch with Daniel Defaix in his restaurant La Cuisine au Vin. Like many winemakers he likes to show off older vintages but in his case he really means old. We had previously sampled a vertical of his premier cru Les Lys going back to 1978.

We started with two Chablisien classics, gougres (little balls of choux pastry flavoured with old Comte cheese) and snails in garlic butter with which we drank his comparatively young (for Defaix) 2000 Cote de Lechet Premier Cru.

We then had the local spin on oeufs on meurette - normally made with a red wine sauce but here with a Chablis and cream-based one and topped with finely shaved truffles - again amazing with the super-elegant Cote de Lechet.

The next course was just-cooked fillets of red mullet in a light Chablis sauce served with an outrageously rich Joel Rebuchon-style potato pure which contains half its weight in butter. You couldn’t have accompanied this with a fuller chardonnay - it really needed the acidity of a youthful but intense Chablis in this case, the 2000 Les Lys which Defaix describes as the most ‘intellectual’ of his wines.

The main course was another classic, Jambon au Chablis, made to a family recipe with an intensely reduced Chablis-based sauce. With this we drank the ‘81 Les Lys which had acquired a rich creamy, almost mushroomy flavour of its own.

We followed it with three local cheeses, Chaource, Soumaintrain and Epoisses, served - and this made all the difference - with a small salad scattered with walnuts and dressed with a light nut oil dressing which built a bridge to the 26 year old (as I write this, I can hardly believe it!) wine.

We finished with a quite excellent crumble of autumn fruits including grapes and figs with which Defaix served one of his own liqueurs, a prunelle (wild plum) - a really fantastic match.

So - outrageous amounts of cream and butter throughout - but in small quantities which didn’t make the meal overwhelmingly rich. It did however underline just how well these ingredients show off great Chablis and the value of serving dishes without unnecessary embellishment when you’re serving an exceptional wine (You can order a similar meal at the restaurant matched with Defaix wines for 59 euros)

The second meal, which took place at the restaurant of Chablis’ main hotel the Hostellerie des Clos, was devised by Herv Tucki, the public relations director of La Chablisienne in conjunction with the chef Michel Vignaud. After the obligatory gougres (served with their whistle-clean Petit Chablis 2006) we started with a first course of poached oysters in seawater jelly and watercress cream, a classic match-with-a-twist for their old vine Chablis, the 2004 Les Vnrables.

We then had a really excellent cod and clam stew with vegetables in a light ‘nage’ of Chablis, chicken stock, cream and butter. Much less creamy than the Defaix sauces it was an equally good mach for a Mont de Milieu 2004 that had already acquired the characteristic pierre fusil (gunflint) notes of a mature Chablis.

The main course was veal fillet and kidneys, served quite rare, an outstanding match for this ambitious co-op’s flagship wine, the opulently rich Chateau Grenouilles 2003. The crucial touch here was the accompanying light meat-based juice rather than a heavy reduction which would have overwhelmed both the wine and the meat.

Cheese, which we took in preference to dessert, was served with my favourite wine of the meal, a 2003 Grand Cru Les Preuses, again showing maturity but also a wonderful mineral intensity. Normally you wouldn’t put a great wine with a cheeseboard - certainly not a red wine - but thanks to the careful selection of the sommelier who picked out a young goats’s cheese (a Vezelay), a Tomme, a richer Pierre qui Vire (a soft washed-rinded cheese) and a salty Chaource, all from the region, there was absolutely no clash with the wine.

As opposed to the Defaix meal which focussed on flavours and ingredients that were Chablis-friendly this meal was particularly interesting for its choice of main course dishes and in terms of showing how Chablis can be carried right through a conventional restaurant meal (though the menu was slightly different from the one normally served at the Hostellerie des Clos) Sometimes these exercises can seem contrived but it was a tribute to Tucki and Vignaud that it seemed entirely unforced.

Winemakers don’t always appreciate how to show off their wines at the table but both Tucki and Defaix are great gourmets who understand that most of their customers want to enjoy their wines with food rather than in a tasting room. "