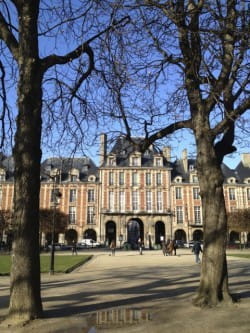 As usual we will be mixing it up between old favourites (Le Baratin, Bistro Paul Bert) and newer openings (come back next week and check out where we've been eating). We’re not great ones for cutting edge cuisine - what we’re looking for is restaurants that are definitively Parisian - ones you wouldn’t find in London. We don’t have a current copy of Michelin or Gault Millau - they simply can’t keep up to date these days.

What we’re relying on is a mix of blogs, books and - once we’re on the spot - apps. Here are the voices we trust (ironically mainly ex-pats)

One of France’s most popular food writers. Trish also happens to be a friend which helps - we’re meeting for lunch while we’re over. (At Semilla since you ask) We’re also taking a copy of her The Paris Gourmet which is like her little black book of the places she enjoys around Paris - shops and markets as well as restaurants. A terrific chatty read.

You can also check out her top 5 pastry shops here

For those looking for the lowdown on what’s happening in the French capital David’s blog is a must-read, certainly for us as he lives (I’m pretty sure) in the same area of Paris we’re staying in - the Marais. I also strongly suggest you buy his brilliant new book My Paris Kitchen, which I’ve been devouring in bed, before you go and to read and cook from after you get back. (It’s too big and heavy to take with you and besides is more of a recipe book than a guide.) You’ll find his Paris favourites here - the only downside being that so will every other American and Brit. You'll need to make reservations well in advance for the places you most want to get to. (In French, preferably.)

Regarded as one of the city's most savvy concierges Adrian is probably more worth following on Twitter than his somewhat erratically updated blog (I should talk) where he tweets as @majormoore. But he's always in the hottest/coolest places.

An older, more established voice but another whose judgment I implicitly trust Patricia has just brought out an updated version of her The Food Lover’s Guide to Paris - also available as an app. It’s less chatty and personal than Deseine and Lebovitz but incredibly thorough and comprehensive with useful maps. I’ve uploaded it on my iPhone.

The two Paris food blogs - apart from David’s - I check out most often:

Which has sections on different types of foods like bakeries, cheese, chocolate and wine bars and useful articles such as Paris restaurants that are open on Sunday (a good 50% aren’t). They also have their own city-wide restaurant guide - favourites are marked with a heart. There’s also a really useful list of Paris food and wine events for the coming week. If you don’t want to explore under your own steam take one of their Paris food tours.

A similarly helpful site from Wendy Lyn - restaurant news, reviews and Paris tours. Unfortunately this new terrine bar won’t be open on our visit so I may have to buy the book.

If you speak French and want to know what Parisian foodies are getting excited about check out Le Fooding's Tout Nouveau, Tout Chaud page. You can also search the site by neighbourhood and style of food - such as hot dog restaurants near the Marais (though doubt if we’ll be taking advantage of that) They also have a good Instagram stream - Lefooding.

Until very recently (Feb 2014) the restaurant critic of Le Figaro, you’ll now find Francois’ trenchant verdicts on his blog Simon Says - some in the form of undercover videos. There are also some posts in English including the thought-provoking Is Paris the World Champion of Gastronomy?

Thanks Chris. I've certainly heard of him but not followed his blog. I'll check it out.

If you don't mind, I personally would add the writing of Alec Lobrano - both his blog and his book on Paris restos (Hungry for Paris). http://www.alexanderlobrano.com/

I've dined at many of the places he recommends and never been disappointed.