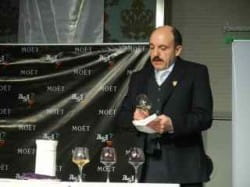 He also has a reassuring track-record. He was the co-founder, with Robin Hutson, of the Hotel du Vin chain, the hotels which made wine chic and accessible. Hotel TerraVina, the Hampshire hotel he bought after he and Hutson sold out, is, if anything, even more laid back, much more like a French-style restaurant with rooms or a Napa wine country inn.

The building itself is quite modest with the air of the converted house, it most probably was and has been extensively renovated to provide large comfortable bedrooms with all the accoutrements of a modern designer hotel: luxuriantly soft beds, plenty of puffy pillows and power showers. It’s more homely and less urban chic than Hotel de Vin though, with brighter colours and more clutter. There’s even a row of colourful adults and children’s wellies by the front door, for those who want to walk off the effects of an over-indulgent lunch.

Wine is obviously the focus of the hotel and there’s a lit-up glass fronted cellar at the far end of the dining room where you can watch Basset rooting about for the right bottle. (That by the way is the tip of the iceberg: there’s another 3 rooms of cellar storage downstairs crammed with more bottles and unopened boxes. “Laura [Laura Rhys, his award-winning* sommelier] has been buying recently” Basset explains. “I dread what the bill’s going to be next month!”.

For such a relaxed set-up the food is ambitious, elaborately conceived and presented - obviously aiming for a Michelin star. An unctous cube of crispy pig’s trotter came with black pudding, a scallop, sweetcorn pure, bacon foam and glazed beets, a combination that I thought might prove an ingredient too far but it was beautifully judged. Ossobuco of Dorset veal, crispy sweetbreads tomato jam, braised white beans and gremolata was again a great combination of flavours but I thought, in this instance, a little overworked.

I liked the bold combinations of roast lamb fillet and curried crab mousse and halibut with smoked potato and squid ink tortellini in our mains - the chef, Alan Haughie, can really cook and neither defeated the lively bottle of Umathum Zweigelt we ordered, having been unable to resist the more obscure reaches of Basset’s list.

The last thing we really needed after all that was desserts but we succumbed anyway and were rewarded by two really delicious ones: a blackberry Bakewell tart with blackberry mille feuille and brown bread ice cream (perfectly paired by Basset with a glass of Bimbadgen Botrytis Semillon) and a baked apple terrine with apple tatin and cinnamon yoghurt sorbet (equally successful with a 2004 Alain Brumont Bouscass Les Larmes)

So, overall verdict? With its top-end food and wine offering Hotel TerraVina isn’t cheap but it’s a great place for a special occasion without being in the least bit snobby, pompous or intimidating. And if you want to be served, in person, by the World’s Best Sommelier - and what winelover doesn’t? - he’s there in person most of the time.

* Laura won the title of the UK’s best sommelier earlier this year.