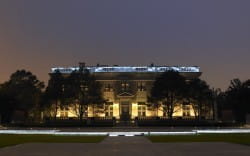 While I was in China last month (October 2008) it was announced by finance ministers that forecasts for the country’s economic growth rate has been revised downwards from 10% to 7% per annum, as a result of the global slowdown. Despite the gloomy tones in which the news was relayed, 7% growth is a figure that most of the western world would give up their budget deficits for.

The evidence of China’s boomtime is all around. A mandatory trip to the Olympic sports area of Beijing offers the most obviously tangible witness, but the glitz and glam of the city centre tells its own dynamic story. Heading east from the Forbidden City, along Donghuamen and Jinbao Streets is a voyage through modern plutocracy, with the massive spotlit edifice of the Legendale Hotel the out-and-shouting, high-camp star turn. In the narrower, intersecting streets, people still squat on their haunches outside tiny scruffy shops to wolf down bowls of steaming-hot noodles in the blear early morning.

Further south, the Pudong skyline of Shanghai rises, Hong Kong-like, on the east bank of the Huangpu river, its central feature the heaven-piercing Oriental Pearl TV tower. Facing it in dumb defiance on the opposite bank is the old commercial waterfront strip of the Bund, western capitalism’s Asian Great White Way, where banks and insurance companies once rubbed shoulders in well-fed Palladian complacency. The cosmopolitan atmosphere of Shanghai dates back to these Victorian days, when the western powers set up their own semi-autonomous exclaves within the city, erecting signs to warn the indigenous population away from their own parks
.
The giddy pace of all this development has been matched by the emergence of an innovative gastronomic scene that draws on western technique and applies it to many of the traditional ingredients and dishes of China’s regions. European chefs have set up camp in some of the big hotels, and boutique restaurant operations have sprung up in some of the most unlikely quarters. Italian food has made a big impact, and indeed the transition from noodles to spaghetti has to be one of the easier transits from east to west. Prominent among the clientele are those western business types and tourists who haven’t yet started feeling the pinch, but there are well-to-do locals in evidence too. And, contrary to reports, I didn’t see anybody adding Pepsi to the red wine.

Maison Boulud is situated amid the marbled magnificence of the former US embassy in the old Legation Quarter in Beijing (above) just off the southeast corner of Tiananmen Square. It represents an extension of operations for Daniel Boulud, a French chef with a network of eateries in New York, Palm Beach and Las Vegas. Boulud’s menu is high-gloss Franco-Asian, offering caramelised sea scallops with stir-fried bok choi or shrimp salad with carrot coulis, coriander and lime to start, followed perhaps by roast chicken in a lemon and Sichuan pepper glaze with snow peas and braised romaine. Mango compote with green tea daquoise, coconut pannacotta and ginger ice-cream ends things on a light but vivid note.

If Maison Boulud is dramatically enough located, the CourtYard goes one better, sitting next to the moat near the east gate of the Forbidden City. Chef Rey Lim also had a grounding in New York, and brings the best kind of fusion-inspired creativity to menus that might go from sublime soft-shell crab tempura with eel teriyaki and sweet pea gele to ginger-lemongrass-soy crme brle, via an outstanding main course of duck done three ways – braised with lotus root and red bean paste, roasted breast in a tamarind glaze, and a more classical leg of lacquered duck with red peppers.

The surroundings of the China World Hotel offer a more obviously corporate setting for Aria, (above) where Bernhard Lermann cooks a Eurocentric menu, taking in citrus-cured salmon with caviar and sour cream, and braised lamb knuckle with aubergine caviar and a ragout of white beans and bacon. The wine list is a grand-hotel tome, embodied in the bottles that line the spiral staircase by which you ascend to the dining-room.

Three on the Bund, a seven-storey Shanghai plaza that hosts an Armani store on the ground floor, is home to the rooftop restaurant and bar, New Heights. Executive chef Xavier Mauerhofer has conceived a brasserie-style menu that deals in the likes of Malaysian laksa and beef rendang, as well as gravad lax, duck Vietnamese style, and fish and chips. Or just linger on the terrace with a cocktail, and drink in some of the most thrilling views China has to set before the traveller.

The smart Xintiandi development, just off South Huangpi Road, is a pedestrianised development built around old shikumen (stone tenement buildings), which has become a magnet for Chinese tourists from other regions. Just around the corner is the house, now a museum, where the inaugural meeting of the Communist Party of China was held in 1921 (admission free). Xintiandi boasts an array of eating options, from Balinese prawn satay and crab balls in Cajun rmoulade, not to mention great brunch dishes and smoothies, at Luna, to coffee and mango cheesecake at Visage from a chef, Eric Perez, who has been patissier to the French Embassy in Washington DC.

Then there is Moon’s, a sepulchrally lit, upscale steakhouse where, halfway through eating my half-pound of prime Australian striploin, I was sent an enormous slab of Black Forest gateau from the Chinese birthday party going on at a nearby table. We raised our respective drinks – Chilean Cabernet and can of Sprite – to each other through the enveloping dusk. ‘Ganbei!’ East meets West indeed.

See all entries tagged "dining out in China"