Pagnolesque, pastis-swigging boules players they may look still look like, but the fishermen of Marseille have a hard time of it today. Ex-fishermen outnumber practising examples. The captain of a pleasure boat I took around the Calanques, a former trawler skipper, listed the problems: depleted fish stocks, EU interference, soaring price of diesel, difficulty selling boats if you can’t make a living using them: owners are actually destroying good vessels, apparently. From 700 twenty years ago, the Marseille fishing community is down to 230 today.

The worst affected are the big tuna boats and the lamparo night fishing trawlers. The petits metiers, one or two man crews, some still operating the brightly painted traditional wooden pointus, are holding up reasonably well; lower outgoings, more flexible sales. The big boats sell all their catch at the main Marseille fish market, down west at Saumaty, past the ferry docks, flyovers, silos and warehouses, the old central Criée on the Quai du Rive Neuve having become a theatre.

The small fishermen also sell directly to the public. A couple of dozen set up their stalls in the mornings on the Vieux Port, squeezed back to the quayside by the massive road works with which Sir Richard Rodgers is turning the rough old Quai des Belges into a gleaming new pedestrian paradise for Marseille European City of Culture year, 2013. Half their stock is live fish, waiting in shallow blue trays or buckets with bubbling air lines: loups, rascasses, rougets, lottes, known in the South as baudroies, chapons, the baudroies’ even uglier cousins, galinettes, vives, conger eels, piles of the multicoloured rock fish necessary for bouillabaisse stock.

To the western side of the harbour lines of restaurant terraces await the tourists, bouillabaisse displays at the ready, nowadays translated into Chinese as well as German and English. In many cases the fish on show is sunken eyed and the prices rip-off. In some, the food is classy, but so are the prices.

I met Christian Buffa, chef/proprietor of one of the classiest, the Miramar, buying a particularly apopleptic-looking chapon to complete a demonstration bouillabaisse, and went back to sample his bourride. The Miramar has an elegant 1960s panelled interior behind its terrace, polished service by a 50% Far Eastern team, and large carte of tempting classic cuisine, which doesn’t come cheap. Fifty nine Euros for bouillabaisse or bourride: the bourride, which I prefer, comes in the same two stage form as the bouillabaisse, soup first, with croutons, cloves of garlic to rub on them, and aioli, then the fish and potatoes, just cooked in the broth, on a platter. The Miramar’s soup is utterly delicious, an assortment of rock fish in stock, cream and aioli all emulsified into pale brown velvet, subtler and richer than the reddish tomato based and rouille infused liquor of the bouillabaisse, good as that is.

In search of something cheaper and simpler, I tried the Boite à Sardine, a narrow shop up on the Boulevard de la Liberation with a steel fish counter inside and a few tables on the pavement. Funky enough, with locals outnumbering the tourists, the latter perhaps frightened off by the oubliette-like toilet/storeage cellar. Some of the food is a bit alarming too. Really good rougets at the moment, I was told: eat them whole, the liver is extremely good. Maybe, but the neat sets of miniature entrails from my rougets went straight under a convenient oyster shell; luckily I was also sampling the Boite’s excellent range of fifteen types of oyster, some delicious mussels and razor clams, supions, the little squid typical of Marseille sautéed in oil, garlic and parsley, and plenty of other plate cover.

Next, off east to Cassis, and another fish shop/ restaurant, the Poissonnerie Laurent. Leaving the Vieux Port by the coast road, you pass a series of rocky inlets, progressively wilder as you leave the city. The first is the charming little Vallon des Auffes, a mini Vieux Port nestling below the raised seafront promenade, home to the classic restaurant Fonfon, but also the cheaper and better Chez Jeannot, where I ate excellent pizza and succulent supions fried in flour with Jonathan Meades, the former Times restaurant critic now resident in Marseille. (Meades‘ other favourites include Toinou and François Coquillages for shell fish and Chez Vincent and Etienne for supions, by the way). Beyond lie the calanques, rocky fjord-like inlets with tiny harbours and humble looking cabanons, fishermens’ huts, which you feel like snapping up for a cheap pied dans l’eau till you find a converted one goes for a quarter of a million euros.

Cassis in an exquisite little port with boules players under plane trees, rows of quayside cafés, steep old blonde stone alleys, then the surrounding hills, with the villas and plush apartment blocks of serious old money, plus a newer population of footballers and the few Marseille gangsters who aren’t in Marbella. And right up to edge of the town, the beautiful vineyards of the twelve domaines comprising the old appellation of Cassis, about which more shortly.

The best time in Cassis in the summer is morning, before the tourists flood in. On the quay is a miniature version of the Vieux Port Marseille fish market, down to three local fishermen. One of them is Laurent Gianettini of the Poissonnerie Laurent, who bought his pointu, says his brother and restaurant manager Eric, instead of a Porsche. Eric doesn’t have to be joking: restored 1930s pointus start at 35000 Euros.

Sitting outside the Poissonerie overlooking the harbour, I ate excellent supions à la provençale, little whitebait –like friture with two rouilles, one dry and potato-based in the old style, one shiny with oil, a grilled loup. The poissonnerie gets 80% of its fish from outside the region now, including the Atlantic, and sells local fish mainly to keep the trade going, and the bouillabaisse authentic. Frankly, it would pay them to buy in sous vide bouillabaisse and pre-packed fish, like more and more restaurants are doing, whether they admit it or not. Still more gloom, in piscine economic terms, but somehow difficult to fret over, on a vine covered terrace, between an emerald sea and a bottle of chilled Clos Sainte Magdeleine Cassis. 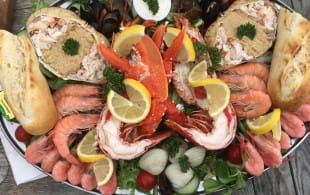 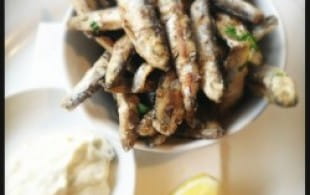 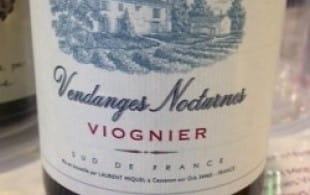