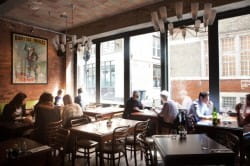 This is the third outlet from Brett Woonton and Charlie Young who bravely set up in St John Street opposite St John’s a few years ago then expanded to Seymour Place near Marble Arch, a welcome presence in an area that’s oddly devoid of good places to eat. A couple of doors up from the perennially popular Polpo, the new Beak Street branch looks another smart location.

The formula is simple and clever. A wine shop and a restaurant/bar. There’s a great list of around 300 less usual and well-priced wines around 25 of which you can buy by the glass at any one time. A few - like the deliciously vibrant Phillippe & Vincent Jaboulet Crozes Hermitage I ordered at Charlie’s suggestion - are available in bag-in-box “about £5 less than it would have been if it had been bottled” he told me proudly.

If you want to get away from the noisy Soho scrum there are bookable - and well-spaced - tables upstairs which is where we ate. The food is simple and robust, designed, I would imagine, to form an accommodating backdrop to as many wines as possible rather than aim for Michelin stars. And - hurray - each has its own wine pairing. 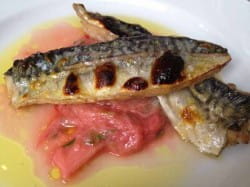 My favourite dish was a nicely seared fillet of mackerel on a rhubarb purée spiked with lovage - an inspired touch with added a welcome note of bitterness to what can sometimes feel like a cloying combination. And which worked really well with its accompanying glass of 2011 Arca Nova Vinho Verde. The baked garlic and Childwickbury goats curd bruschetta which my daughter tucked into with relish was also good - and perfect with a glass of Camel Valley Bacchus.

Mains were slightly less controlled. My roast rose veal, snails and salsa verde was tasty but suffered from an excess of celeriac which was piled in rather unlovely brown slabs around the dish. And my daughter’s bavette was rare even by her blood-curdling standards. It came with some excellent hand-cut chips though which she demolished with enthusiasm and glossy fresh watercress (which she didn’t).

The dessert she chose - an ultra-chocolatey brownie and ice cream - totally hit the spot though must prove a challenge for most dessert wines.

If you just want a light meal there’s a guy slicing charcuterie to order on an old fashioned slicer. I suspect, as in most wine bars, that would be a good option as would just having a couple of starters.

So - a great addition to the Soho drinking circuit, a good place for a reasonably priced meal and an excellent one to buy wine to take home if you work around there. Usefully it’s also open on a Sunday.

Vinoteca is at 53-55 Beak Street, London W1F 9SH. You can also buy wine from their website www.vinoteca.co.uk

PS London’s other high-profile wine bar 28-50 is opening a new branch next month in Marylebone Lane. Check out their website for details.

I ate at Vinoteca as a guest of the restaurant