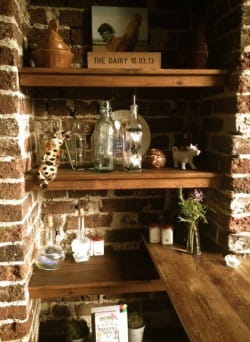 I’d heard good things about The Dairy, not least from my son Will (of Hawksmoor*), one of whose favourite restaurants it is, but being south of the river it took me a while to haul myself down there.

In fact even longer than I’d anticipated. It was a tube strike the day I went so I had to take a bus which progressed in sedate and leisurely fashion from Marble Arch to Clapham Common, a not disagreeable experience on a sunny spring evening. As I was trying to avoid the rush hour and was early I also managed a brisk walk on the common to work up an appetite, a strategy I can strongly recommend.

The restaurant is much smaller and more rustic than I’d imagined, more like a gastropub or bar than the fine dining set-up you'd expect from an establishment with a tasting menu. Thankfully they don't impose that on you - you can also order dishes individually which is what we did. There’s some ambitious cooking though, no doubt about that. 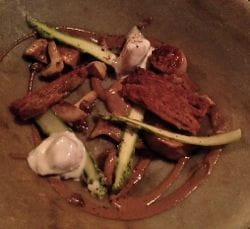 The most memorable dish which has had me obsessing about it continuously since my visit was chicken oysters with a couple of little stacks of crisp deep-fried chicken skin, wild mushrooms and asparagus. It obviously looks a great deal more enticing than this shockingly bad photo. Make sure you order your own portion. Don’t share.

Other great dishes were a cracking chicken liver mousse (oddly on-trend at the moment) with rhubarb and apple, broad beans with smoked ricotta, house lardo and whey (at least I think that’s the version we had), a gorgeous dish of rooftop carrots (presumably grown in their 'urban garden') with goats cheese, oat granola and buttermilk, and Galician octopus with tomatoes, fried bread and rooftop herbs. We also, I see from our bill, had some squid. I can’t remember for the life of me how it was cooked. It was a catch-up meal with an old friend and we were yammering too much. 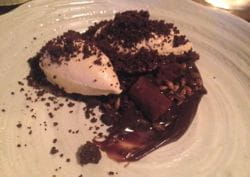 We also found room for two desserts: salted caramel with cacao and malted barley ice cream and that chocolatey 'soil' you see everywhere which I found a tad rich but I probably wouldn’t have bothered with dessert had we not felt we *should* do the menu justice. And something more refreshingly rhubarby - also good I seem to recall but which has vanished into the mists of time. And some warm madeleines or maybe that was somewhere else.

As is usual with small plate restaurants it’s easy to work up a fair sized bill without realising it. A modest drinks tally of one cocktail (a deliciously refreshing Fennel and Apple Hendricks, below), one ‘virgin’ version and two glasses of wine came to £28.25 + service - almost a third of the total £100.40 bill. 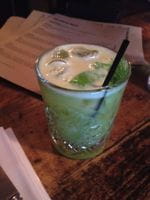 You could easily do significantly more damage to the short but appealingly quirky wine list which is divided up by style and mood (textured, intricate, mouth-filling whites and dark-toned, fleshy, energetic reds, for example). On the other hand you could drink beer - there’s a short but well-chosen list - and eat rather less or stick to the bar snacks. And there's a 4 plate lunch for £25 from Wednesday to Friday which is a steal.

Is The Dairy worth the detour? I’m not sure it is if you’re based the other side of the river. Not that it’s difficult to get to but if you're only in London for a short while there are plenty more central alternatives. But it's a fantastic place to have on your doorstep if you’re a sarf Londoner like Will or my lucky friend. I might just have to scrounge a bed for the night to re-taste that chicken.

* never resist an opportunity to give the family a plug ...