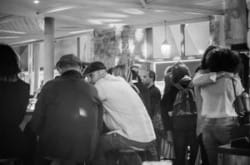 My husband, the master planner of the trip but not normally a Thai food fan was insistent we should go back to Le Mary Celeste, a restaurant we'd only managed to have a drink and a couple of oysters in on our last trip.

His meticulous researches (see How to plan a food trip to Paris) had revealed that it was now the scene in the Marais where we’re staying. It would be convenient, he argued, on the first night.

When I saw the menu I thought ‘Ha! He’ll hate it’ - apart from the natural wine list. There was next to no meat and far too many vegetables for a red-blooded Welshman. Of course I was proved wrong.

Apart from the oysters which are the speciality of the place dishes are in fact slightly bigger than tapas - more like raciones - but still designed for sharing as our very sweet waitress explained. (The service is unusually friendly for Paris.) The tables are so small they have to be served one by one. 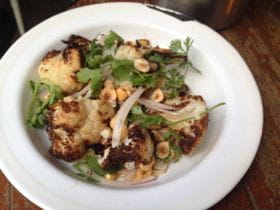 The first dish - roast cauliflower with some chilli-infused fish sauce, hazelnuts and herbs (coriander) was unlikely but a real winner, the sort of dish you want to work out how to make at home. ‘Thai tacos’ (below) with a larb-style pork patty and pickles and chilli mayo was a dribblingly messy sandwich of a dish I’d happily go back for. Oeufs du diable, a spicy riff on egg mayonnaise was a spicy mouthful of bright fresh ginger, onions and crunchy fried rice. Gorgeous. Only some rather strange slabs of rice cake with a fiery radish dressing didn’t quite come off. My other half chomped his way contentedly through the meal admiring the chef’s boldness with seasoning. Wonders will never cease. 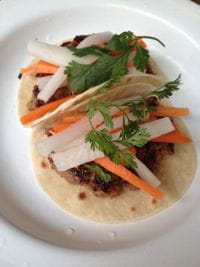 The wine we drank - a Tête de Gondole, a crisp blend of chenin and sauvignon from Domaine Chahut et Prodiges, frankly struggled to keep up with the onslaught. We’d have probably done better to order a cocktail which was obviously what most of the young clientele were going for. I was particularly tempted by the Koh Garden (Aalborg aquavit, homemade kaffir lime leaf and galangal syrup and lime) though it might have possibly been an overload with all that punchy food. And they cost 12€ (£9.88/$13.63) which would have undoubtedly bumped up the cost of our otherwise very reasonable €59 (£48.57) meal though remember French bills include service.

The menu changes daily so we might even go again during our stay. If we can get in, that is. It gets rammed so you need to book during the limited time they take bookings - or be prepared to queue.

Update from a subsequent visit in March 2015 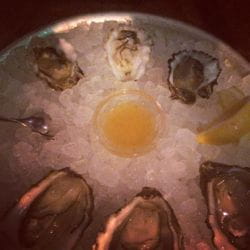 Returning to the Mary Celeste a year later I’m not quite sure why I dubbed it Thai. Sure there are Asian inflections but not specifically Thai ones.* Only the oysters and oeufs du diable still remain on the menu and are as good as ever - the rest was a bit of a mixed bag.

A chickpea salad with beetroot, feta and mint was fresh and tasty as was a plate of panisse with chimichurri sauce but an ‘assiette de broccolis’ was tough and undercooked with barely a smear of the advertised smoked haddock purée.

Mary Celeste is noisy and cramped but it has an incredible buzz. Think of it more as a bar to have a drink and a couple of snacks than a restaurant and you won’t be disappointed. Our bill was a reasonable €76.20 (£54) for two but we could have spent less.

*I've since learnt the chef has moved on.