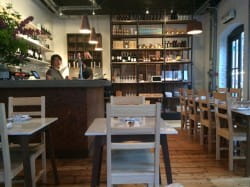 The hype that accompanies almost every new restaurant launch these days is crazy. We all swarm in, pronounce it the best opening this year then swarm off to the next hotspot.

No restaurant is perfect in the first few days, even one run by that luminous talent Nuno Mendes formerly of Viajante, now of Taberna do Mercado in Spitalfields which he’s combining with his day job as executive chef of the fashionable Chiltern Firehouse, a fact that’s bound to stretch his team in the first few weeks especially when a large party descends from a neighbouring wine fair.

Nuno is proudly Portuguese and this gives him a chance to explore some of his country’s great rustic food traditions but also - being Nuno - to innovate To say that his food occasionally oversteps the mark is like complaining that Delia Smith’s recipes are too reliable. Of course it does 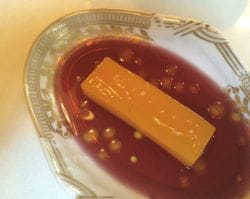 What have I got in mind? Well the abade de Priscos a silky - no, go on, I’ll say it - slimey egg pudding made with pork fat and served with a port sauce is actually rather horrid. Turns out it’s a traditional dish from Braga and one of the 21 wonders of Portuguese gastronomy but to be honest I’d rather have a custard tart. And I’m not wild about the Tigelada, a slightly leaden milk pudding either. Clearly Portuguese desserts don’t do it for me.

I also wasn’t convinced about the chicory and pear and almond salad that arrived with a spicy chilli sauce (masa di pimentao) that overwhelmed the other ingredients or an over-crunchy carrot escabeche. 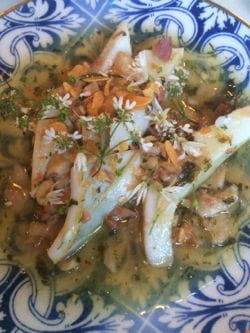 But the highlights were dazzling. The widely instagrammed (including by me) cuttlefish and pigs trotters coentrada is just insanely good, an umami bomb of a surf and turf dish that I could easily have made a meal of. (I might have to order two next time.) Runner bean fritters (below), a pretty tempura-like tangle of crisp vegetables makes the perfect snack while you’re debating what else to eat and the prawn rissois (or croquetas as they’d be called in Spain) are the biz.

I also loved the idea of the ‘tinned fish’ which are apparently cooked sous vide but cutely arrive in tins with an accompanying sauce, some very good toasted bread and pickled radishes. We had the daily special, some outrageously fat mussels with a wild garlic sauce which were fantastic.

Wild garlic also appeared in a dish of migas (breadcrumbs) with asparagus and fennel so there’s more than a nod to seasonal ingredients - appropriate to the restaurant’s market location. I thought it tasted nicer when it was lukewarm than hot - as is the way with these small plates restaurants, dishes all arrive at once. (Tip: don’t order more than two or three at a time if you don’t want to be in and out within the hour.) 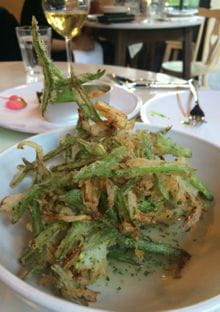 We spotted some other dishes arriving at neighbouring tables. The sandwiches (beef prego with prawn paste and wild garlic, pork bifana, yeast mayo and fennel) sounded and looked particularly tempting and judging by the silky coils of ham that were sailing past, the cured meat section is also worth exploring. As is the all-Portuguese wine list, much of which is available by the glass. I loved both my sparkling Campolargo Bairrada rosé (great with the trotter dish) and intensely flavoured Antonio Lopes Air Vinho Verde - still remarkably fresh for a 2011 vintage. The charming staff are well-informed about both the menu and the list.

So I’ll definitely be back and you should definitely go, though maybe in few weeks once it's had a chance to get into its stride. And once the fuss has died down though given it’s Nuno and one of the city’s only Portuguese restaurants I’m not hopeful that will happen any time soon.

Taberna do Mercado is at 107b Commercial Street which is just inside the entrance to Old Spitalfields market. It’s open every day but only takes bookings at lunchtime (and is relatively small so you may face a wait to get in) and serves a restricted menu in the afternoon. Go early (like 6pm) as we did. Our bill came to £86.29 including 4 glasses of wine which is way more than you need to pay if you’re not as curious or greedy as we were