So why the hype? Well there’s a compelling human story behind the restaurant. Gyngell, the daughter of Australian TV entrepreneur Bruce Gyngell, had a well publicised (and successful) battle with alcohol and drug addiction which still gives her a somewhat waif-like quality. After working as both a restaurant and private chef she came to fame in the noughties through her stint at Petersham Nurseries Café which spawned cookbooks and a column in the Independent on Sunday. Since she left in 2012 bemoaning the expectations created by a Michelin star she’s been somewhat below the radar until this project which is clearly supported by some very wealthy backers.

It is a stunning space which spills over two rooms in the new wing of Somerset House - one like a romantically leafy glade, the other a much larger open brasserie, its walls studded with ceramic flowers. It feels like being in a dream, peopled by a slightly bewildering hierarchy of servers - women in colourful tents who seem to be the greeters, waiters, largely male, in what appear to be clown outfits. I'm sure a psychologist would have a field day with it. No wonder the restaurant has been such a long time in gestation. 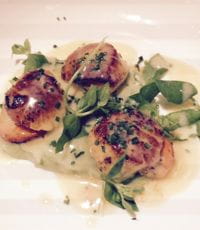 There is at least thankfully no menu concept which has to be explained, just artfully simple food which apparently changes from day to day. Gyngell has a light touch, relying on first class ingredients rather than any cheffy tricks. There are no smears, drizzles or foams. Our starters were just lovely - some silky onion squash ravioli with ricotta and marjoram butter and an original twist on the well-trodden scallop and cauliflower combo - scallops with romanesco, beurre blanc and chickweed (the menu lists plenty of on-trend hedgerow ingredients)

This was just as well because the main courses took a good 45 minutes to arrive - clearly an oversight about which they went into a meltdown of embarrassment. It happens. It was the second week of opening though I think the size and popularity of the restaurant has left them a bit stretched. 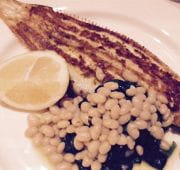 Despite lusting after the plates of pork belly that were going by we were glad we’d stuck to fish once it came - some crisply seared seabass with girolles and chanterelles in my case, a beautifully fresh Dover sole with cannellini beans and spinach in my daughter-in-law’s. Both top notch.

Despite flagging slightly by this stage we felt we should at least try a couple of desserts - a very good homely hazelnut and pear tart and a slightly odd unmoulded pannacotta with damson sorbet and wood sorrel which tasted better than it looked. 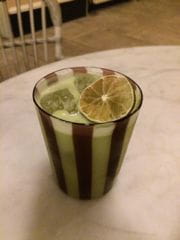 We were brought a succession of well-chosen wines by the sommelier Frank who appeared to be the only member of the team wearing his own clothes. Cleverly he picked more adventurous pairings for me than he did for my daughter-in-law - a light red (Domaine des Roches Neuves Saumur Champigny) with my bass and a 2010 Jean-Marc Vincent Auxey-Duresses les Hautes for her sole. And suggested an amazing natural Sauternes from Domaine Rousset-Peyraguey I hadn’t come across which was great with the tart. As always it’s a rewarding but expensive way to drink. My guess is that with three different glasses each our wine bill would have come to around £40-45 a head - slightly less than you'll pay for the food. (Frank, having read this points out that the wines he selected would only have come to £30 a head which is still rather more than some people would expect to pay for wine but by no means excessive. So reckon on £80 a head + service including wine)

I just have this concern that Gyngell might have bitten off more than she can chew with Spring - that she’d be better suited to a smaller, more intimate venue. With its 100 covers it seems a big space for someone who strikes me as a domestic cook at heart rather than a chef. Which is also true, of course, of Ruthie Rodgers at the River Café and she’s pulled it off, so who knows?

I will go back though, probably at lunchtime when the room must be lovely flooded with natural light. And when it’s quite a bit less expensive than the evening. Apparently children are welcomed too which makes a pleasant change for a high-end restaurant.

PS If you want to experience Spring on the cheap you can sit in the 'Salon' outside the restaurant and have one of Gyngell’s rather glorious ice creams, a glass of wine and a sandwich, or, even better, an apple and pistachio soft drink (above) which may be the most delicious non-alcoholic option in London.

I ate at Spring as a guest of the restaurant.