It's hard to keep up with London restaurant openings these days. The latest hotspot seems to change from week to week but these four should definitely be on your radar in spring 2015.

I wrote the original reviews before Christmas, updating Kitty Fisher's once I'd been there on New Year's Eve. Since UK prime minister David Cameron took his wife Samantha there last month it's been even harder to get into. Try lunch.

I've also replaced The Greek Larder in the original post with Blacklock - not because I don't rate GL but I think it belongs better in my London breakfast round-up. 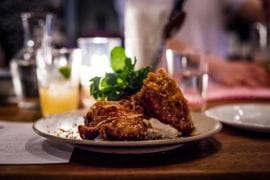 Smoking Goat (above and right) has all the prerequisites of a hip London hangout, except possibly being in Shoreditch. It’s tiny, you can’t book and it does cocktails and dirty food in the form of Thai barbecue (Thai looks like being one of the trends of 2015 - see also Som Saa which I haven’t managed to get to yet but have heard great things about.) Hitting it on a Monday - probably a wise move in terms of the queues - we missed the dirtiest dish of all, the epically messy crab but managed to score the fabled fish sauce wings, slow roast duck - like a Thai-spiced confit - and a special of pork belly which was also insanely good. The wine list, compiled by Zeren Wilson of Bitten & Written is far better than you'd expect from a place of its size (see my match of the week a couple of months ago). Note they don't serve the full menu until 7pm though are now open for lunch. And they stay open late - until 2-ish, I believe. Told you it was hip. 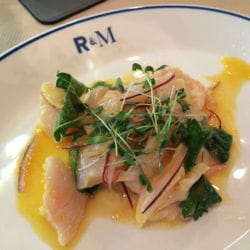 The latest creation from the Goodman and Burger & Lobster team, Rex & Mariano has the stamp of an equally successful roll-out. Its USP is affordable seafood though not with quite the NY/Italian vibe the name might suggest. There’s a lot of raw fish in the form of carpaccios, tartares and ceviche, some demon red prawns we had them grilled) and a generous but slightly bizarre fritto misto that contained fried tuna and salmon (some might not object as much as this fritto misto purist). Some clever ideas have gone into the place - iPad ordering (great fun), wine on tap, including some cool Californian reds and only 5% service (here's hoping the staff don't take the hit.) Fresh, modern, fun and affordable it’s somewhere you could take anyone (barring a fussy fish-hating 5 year old) for a stylish central London meal. 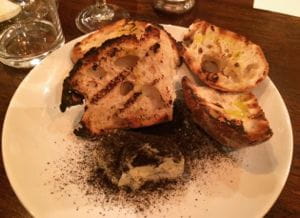 I’ll write this up when I eventually get there (see below for update) but thought it was worth including as it’s already attracted rave comments on Twitter from Times restaurant critic Giles Coren. Billed as a ‘louche dining experience’ it looks warm and clubby. Specialities includeTaleggio on Grilled Bread, Mustard, Ale & London Honey - a good enough reason to go there in my book though the Galician beef for two, cooked on the wood grill, is said to be the thing.

I did make it on the last day of 2014. I wouldn’t have said it was louche - not at lunchtime anyway - it reminds me of the kind of restaurant I used to go to in the 70s, all dark wood and dusky pink velour banquettes. The food is bang on trend though. Being over the Christmas holiday they didn’t have the Galician beef but a home-grown, well-matured and slightly gamey version. No toasted cheese either but some really fabulous grilled leeks with brown butter and smoked almonds (right) and burrata, beetroot and clementine - they’re particularly imaginative with veg. The highlight though was some incredibly more-ish rough-hewn toasted bread with whipped butter, dusted with powdered burnt onion (above). Doesn’t sound that appealing, I know, but you’ll have to trust me. Steak tartare, not on when I went, is said to be great too.

Kitty Fisher’s isn’t cheap - we are talking Mayfair after all. I spent just under £150 for two of us with only one dessert, a glass of Cava and one bottle of wine but it is original and charming. Exactly the sort of place to take a visitor to London who wants something typically English. Or a prime minister . . . 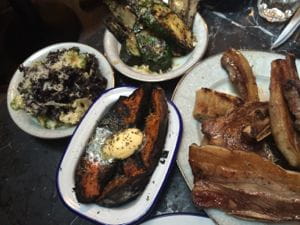 You only have to learn that a restaurant specialises in skinny chops finished with a flatiron to fancy going there (unless you’re a veggie of course) so I was ready to fall in love with Blacklock before I took a single bite.

Coupled with £5 cocktails and an inventive assortment of sides this new basement restaurant just up the road from Piccadilly Circus adds to Soho’s claim to be the epicentre of the cool end of the London dining scene.

The best deal is the ‘all in’ - a selection of ‘pre-chop bites’ (cheese and pickle which is topped with freshly pickled veg is my fave), beef, pork and lamb chops and a choice of side (I strongly suggest you go for the 10 hour ash-roasted sweet potato which is the best sweet potato dish I’ve ever eaten). Or the charred baby gems. That’s £20 a head for a minimum of two. Oh, and the best bit is the fact the chops come on chargrilled flatbread which soaks up all the meaty juices.

The downside, as with Smoking Goat, is you can’t book which given its popularity may make getting in in the evening a bit of a pain but lunchtime at the moment is fine - and rather less noisy if you’re over the age of 40. There are also wines on tap and craft beers (‘course there are) and a wicked white chocolate cheesecake served ‘family style’. In other words in unhealthily large portions though there is poached rhubarb on the side to kid you it's a healthy choice ...

Blacklock is in the Basement at 24 Great Windmill Street and is open Mon-Sat from noon to 11.30 and Sunday until they’re sold out. Nearest tube: Piccadilly Circus.

Disclosure. I was comp'd my sides, pud and a couple of free cocktails at Blacklock. Not that it would have broken the bank if I hadn't been.

The family style white chocolate cheescake from Blacklock is fantastic! The restaurant itself is getting busier all the time, hopefully they will be opening a bookable private table to add to the growing list of <a href="http://private-dining.co.uk/location/london/">private dining rooms in london</a>