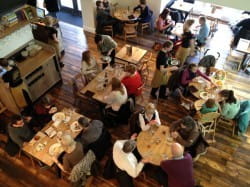 There's always a slight suspicion that celebrity chefs are cashing in with these enterprises and although Hugh is a colleague at the Guardian I wasn’t expecting a great deal, to be honest. But it’s a lovely open rustic space with a very relaxed atmosphere and exactly the kind of wholesome food you'd imagine from his recipes.

As you’d expect from a champion of sustainable fishing and healthy eating the ingredients are scrupulously sourced, mainly from the west country. There’s a board on the side which trumpets the suppliers. Most vegetables are grown within 50 miles of Bristol. The menu is strong on veggies though Fearnley-Whittingstall is not too puritanical to offer chips - albeit with Maldon sea salt. 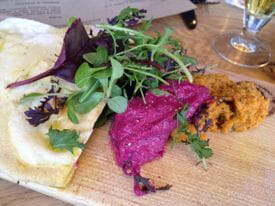 The highlights of our meal were a colourful board of beetroot hummus, carrot puree, a perfectly spiced pork terrine (rare to get that accuracy of seasoning) and a warm salad of roasted parsnip, lentil and superbly light moussey goats’ curd that wouldn’t have looked out of place in the River Café*.

Mains, being sent out in the middle of a very busy Saturday lunchtime, were slightly less sure-footed, a spicy bacon and cannellini bean stew failing to disguise the basic dullness of a generous hunk of pollock (sorry Hugh, it IS a boring fish) and the rather leaden wood-fired pizza crust needing a bit more fine-tuning, as our waitress acknowledged. But a simple dessert of poached pear with ice cream and chocolate sauce - despite its teetering pear - was lovely: a natural, not over-sweet way of ending a meal. The sort of thing you’d run up for friends - or at least I would.

The well-priced short wine list has a number of organic options though it would have been good to see a few more English wines on it. Cider comes from Orchard Pig and beer from the local Bristol Beer Factory. I had a cider called Charmer that sailed serenely through the meal. 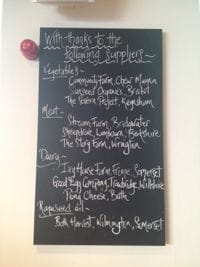 Brownie points too for the childrens’ menu which had five main choices the day we were there including grilled whiting and salad, felafel with flatbread and hummus and a leek onion and cheddar pizza parcel (a pasty?) as well as the inevitable pasta and bangers and chips.

Given that the aim is to change the menu every day there were the inevitable glitches - a couple of missing elements like the chutney from my husband’s terrine and a side of kale that had been sent out without the advertised lemon and rapeseed oil (both swiftly rectified) but these are early days. The restaurant doesn’t officially open until tomorrow (March 4th). Service is sweet and the pricing more than fair for the quality of the ingredients.

Bristol does casual eating well so there’s plenty of competition for the RCC but few that offer quite such imaginative food for kids. Once the glitches are ironed out it will be interesting to see if it can manage to keep up the standard at these prices. All credit to it if it can.

PS One other point when you’re booking. There’s more room between the tables - and fewer buggies - on the ground floor than upstairs. Ask for a table in the window if you can get one.

*Where Hugh started his career

The River Cottage Canteen is at St John's Court, Whiteladies Road, Bristol BS8 2QY. I ate there as a guest of the restaurant.