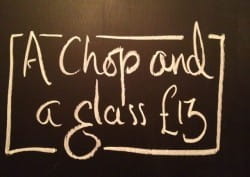 From the outside, the re-opened Quality Chop House in Farringdon may look like yet another retro restaurant revival but the big draw is the wine list put together by its well-connected young proprietors.

They’re not making a big deal about it but Will Lander is the son of top wine writer Jancis Robinson and restaurant critic Nick Lander and his business partner Josie Stead (formerly general manager of Heston Blumenthal’s Dinner) the niece of Stephen Browett of Farr Vintners. As a result they’ve managed to get their mitts on some impressively rare bottles and vintages which you can both drink in the bar or restaurant or take away (of which more below). At the time of writing, for example, they have 1950 Banyuls by the glass.

The wines are by no means all expensive, though. The list is scattered with really interesting well-priced buys in the £20 to £40 price bracket including the Colet Vins Vatua, a delciously rich, peachy Cava-like sparkler (a bargain at £5 a glass) I kicked off with which just about managed to penetrate a heavy cold.

We also ordered a white garnacha (Verd Albera from Marti Fabra, a bargain at £21) which was given the thumbs up by my snot-free companion and rich, plummy (I think) glass of Les Clos Perdus Corbières that came with the £13 'chop and a glass' offer. (The chop was a choice of Middle White pork or a Barnsley chop and mash. Smart idea.)

The sensibly short menu - at lunchtime at least - is typical gastropub fare as befits the establishment's Chophouse roots but is not a million miles either from that of Green Man French Horn where Josie’s boyfriend Ed Wilson is consultant chef (I imagine there were some battles over divvying up the charmingly retro French plates that appear at both establishments). 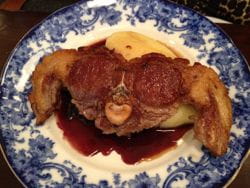 We shared a nice fresh piece of mackerel and beetroot relish (at least my companion said it was nice) and a chunky game terrine followed by the chop and a wholesome plate of roast shoulder of Middle White pork and stuffing. (They apparently also do sandwiches to take away based on the weekday menu).

In the evening they have a more ambitious but well-priced four course set menu for £35 and, according to the website, ‘open a few magnums’ so you can have a glass of something decent while you decide what to drink.

The all-day (from 11am) bar offers charcuterie, cheese (from Neal’s Yard) and cake and would be an immensely civilised place to hang out for a couple of hours if you were in the area.

The only problem? The shop. Well, not really a shop but a line of seductively presented bottles along a shelf which you can buy, Parisian-style, to take away. Very, very tempting if you’ve just discovered a wine you enjoyed and fancy another bottle to drink back at home. But they’re only £5 less than the restaurant price which makes them, for the most part, considerably more expensive than they'd be elsewhere, retail*.

So, in summary, a great hangout for winelovers, great value if you drink in, just don't go mad with the takeout in a boozy post-meal spree. As I probably would have done if I hadn’t had that dratted cold . . .

*The restaurant (I'm guessing Will) has just posted this about their wine pricing on their Tumblr blog. Interesting to see how people react.

I actually asked that! They said they'd run it by you and you'd pointed out a couple of gaps which they'd filled - but clearly with wines of their own choosing. It's the same with Hawksmoor - they firmly do their own thing and that's how it should be . . . (Good thing we have wine writing to keep us busy ;-)

Just been to our son's Quality Chop House for our first lunch and dinner and am astounded by how relatively few of the wines on the list I know - and by how little Will has consulted his parents on the whole enterprise.

Don't know whether to be proud of or offended by his 100% independent wine notes - which are rather good! The former I think on balance.