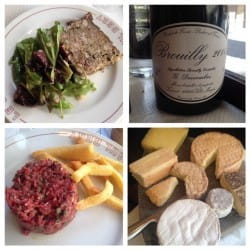 Why? Because they’re two places that remind you that restaurants are not just about eating but the whole experience of being there. They have hinterland, character and soul.

Actually last time we booked the trendier Le 6 Paul Bert and regretted it. Not because the room wasn’t lovely or the food isn’t good but because it lacked the parent restaurant’s cosiness and theatre

The Hercule-Poirot like figure sitting in a maroon velvet smoking jacket by the entrance at what was presumably his favourite table. The two old girls (80 at least) who’d come in for a good gossip and a slap-up lunch. The young woman scribbling earnestly in a notebook with a pencil. A pencil! All Parisian life is there.

The set price lunch must be one of the best bargains in the city: 19 euros for three generous courses. And there’s choice - increasingly rare in the hipper hangouts in Paris these days. I had a generous slab of coarse, chunky terrine which arrived with a sharply dressed salad (with shallot in the vinaigrette - full marks) and a perfectly seasoned steak tartare and chips with plenty of capers. And I’m difficult to please on the steak tartare front. Dessert was a simple but delicious slice of roast pineapple and vanilla ice cream. 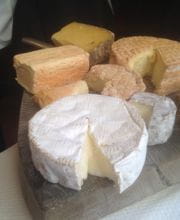 My husband ordered from the more expensive 38€ menu so we could have cheese. And what cheese! It arrived on a massive cheeseboard which was just left on the table. Only the fact we’d already eaten so much prevented us doing more damage to it. He also had a mound of fat white asparagus and a huge portion of veal kidneys in mustard sauce. Cooked just pink as he ordered.

You would of course spend a great deal more if you did full justice to the wine list which includes a fine selection of Burgundy, Rhone and Bordeaux. We contented ourselves with a relatively modest Beaujolais (a 2011 Descombes Brouilly) which suited the food perfectly. It was served at exactly the right temperature (cool) and again left on the table for us to help ourselves instead of having our glasses relentlessly topped up. (Does that annoy anyone else?)

Le Baratin is admittedly less immediately congenial. For a start it’s in a rougher part of town. The welcome is not particularly warm if you’re a first timer or, worse still, don’t speak French The clientele who have made the trek sometimes seem more concerned to tick the experience off than actually enjoy it. The girl on the next door table had obviously come to eat just one dish and snap it with a large SLR.

The food isn’t fancy. But it’s made from impeccably sourced ingredients and tastes like the best home cooking you’ve ever had. Which it may well be. Unusually the mains are high point - big generous platefuls of food that you dream about for months afterwards. 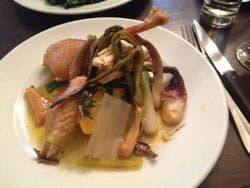 On a Friday evening I had a mound of roast chicken from a bird which had obviously lived - a breast, a flavourful drumstick and a deeply savoury wing along with a cascade of fresh vegetables that tasted as if they have been harvested earlier that day - spring onion, leek, carrots, potatoes and chard. No sauce, just the natural meat and vegetable juices.

My husband had a roast shank of Pyrenéean milk-fed lamb with barely wilted spinach and sweet, mealy new potatoes - hardly seasoned but so intense in flavour. Both dishes showed off our wine - Jean-François Nicq’s 2012 Les Foulards rouges Glaneurs, a pure, bright, vivid grenache, to perfection. It wasn’t on the chalked up wine list which is more by way of being a conversation-opener about what you might want to drink. It’s pretty well all natural.

Starters by contrast are simply a warm-up act - a big plate of Iberico ham (husband) and braised artichokes with lemon (me). Both tasty without stealing the show from what was to follow. They absolutely do the job. 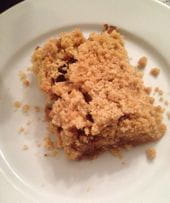 Finally an extraordinarily good apple crumble of exactly the right texture, temperature and proportion of topping to filling. Only the cheese - an oddly bland Beaufort - was a disappointment. Our waiter sent for the gaffer who lurks behind the bar sizing up the clientele like a bird of prey*. We quaked but explained that we didn’t think it matched the quality of the rest of the ingredients. He shrugged as if we were mad but found he had taken it off the bill (€120 for two compared to €98 at the Paul Bert but Le Baratin is also cheaper at lunchtime.)

Bistrot Paul Bert is easy to love. It’s the French bistro of dreams. The Baratin less so but if you succumb to its offbeat charms you’ll be as hooked as we are. As many have remarked it's more like eating in someone's home than a restaurant. No wonder so many chefs hang out there.

These two Paris institutions have been there for years but won’t go on for ever. Philippe and his wife Raquel who presides over the Baratin kitchen must at least be thinking about retirement and it won’t be the same when they’ve gone. Go while you have the chance.

NB. There is another Paul Bert and another Baratin in Paris. Make sure you go to the right ones.

* That said he did recognise us this time, cracked a smile and gave us a table big enough for 4. We've obviously passed the test.

Went to Le Baratin last year with a couple of deeply unfashionable sports journalist colleagues. As you say, real French food from an earlier time. The patron was a little scary, quand meme! Dofficult to imagine Raquel not being in that kitchen.

Always appreciate it when restaurants don't

Re topping up of glasses - don't know anyone who isn't annoyed by it.