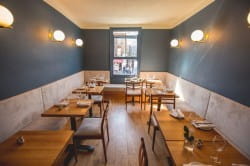 Islington lucks out with Oldroyd

We got two important things right on our first visit to Oldroyd. We went before most of the reviews came out and there were four of us which gave us an excuse to try practically everything on the menu.

I don’t know why, in this age of small plates, one doesn’t always do that. Probably because it’s difficult to find three similarly food-obsessed dining companions who are free on the same night but it’s one of the advantages of being around in high summer when there’s not much else on.

Oldroyd, in case you haven’t been feverishly scanning the food press, is the eagerly awaited solo venture from chef Tom Oldroyd who used to head up the kitchens at Polpo. It’s hard on the face of it to see why he would want to abandon the comforts of executive chefdom with someone else worrying about the money and most evenings off for a tiny 28 seater in Islington where he’ll have to be there all the time but I guess he has more freedom to cook the sort of food he wants. Which is basically Polpo plus. Big flavours, delivered with real flair.

Everything we ate - and as I pointed out we ate practically EVERYTHING bar the Cornish seaweed and cider salami and peach and cow curd panzanella which didn't sound entirely convincing - was good, the sort of dishes that make you feel you immediately need to go back to eat them again or recreate them at home. (Inspired by the paella which came topped with chargrilled squid, rabbit confit and a generous dollop of aioli I have a pile of Spanish cookbooks next to me as I write.) 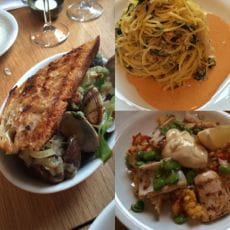 There were some great meatballs - unusually lamb rather than pork or veal made with almonds and served with a creamy, gently spiced romesco, a steaming pot of clams with chilli chorizo and thyme (and butter I would guess from the richness of the sauce), a cured rather than raw veal tonnato which added a deliciously smoky dimension to this Italian classic, a special of red prawns and a gorgeous plate of spicy crab tagliarini ‘provençal’ (not sure why?) in a pool of brown crab rouille that makes you wonder why restaurants don't serve pasta with a sauce on the side more often. The most expensive of those dishes - the paella - was only £11 and definitely a racion rather than a tapa size portion

Oh, and we kicked off with a few summery radishes, imaginately served with smoked cods roe (aka tarama) and some perfectly fried smoked pork belly and pea croquetas with truffle mayonnaise (Oldroyd clearly loves mayo in all its forms). Unsurprisingly we were defeated by the time we got to pud but there was chocolate mousse with salted pistachio praline and raspberries and stone fruit and brioche pain perdu on offer in case you’re wondering. 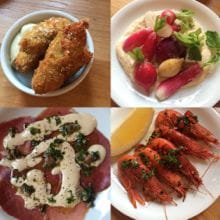 The only slight disappointment was the very short wine list but I guess there’s no room in this shoebox-sized restaurant for wine. That said, both the bottles we chose - a Chateau d’Astros rosé and a Bodegas Ponce Bobal were fine though on a warm evening the Bobal could have done with being chilled. And decanted. (Which to do first? We went for decanting then shamelessly ordered ice-cubes to drop in the wine*. Our very sweet waiter didn’t turn a hair.) Cocktails - including an on-trend Oldroyd vermouth - look rather more interesting.

The quality of ingredients and cooking were so good and our bill at £40 a head (including service) so reasonable that it’s hard to see how Oldroyd is going to make enough money out of his venture. Maybe it’s a prototype for a bigger restaurant to come. Let’s hope so. Get your booking in quick, anyway. With three friends, of course ...

*Quick way to cool wine if you've already decanted it. Drop in 2-3 ice cubes into your glass, stir then remove them.