Gordon Ramsay, Royal Hospital Road: is it really worth 10/10?

I don’t envy Gordon Ramsay - or rather his head chef Clare Smyth - the 10/10 rating they received in this year’s Good Food Guide. It makes people like me think ‘Ha! I wonder if they’re really worth it?’ and book to find out.

Not that I have anything against Gordon. He was of the first chefs I ever interviewed when he was a sous to Marco Pierre White and I can only admire the empire he’s built - and still building. Having spent time cooking in France he’s an accomplished classic chef, a fact recognised by Michelin which has given his Hospital Road site 3 stars since 2001. Another accolade to assess.

It took us long enough to get a booking anyway - a couple of months - so unsurprisingly the restaurant was full. It’s smaller than I remembered - still essentially the same room occupied by his predecessor Pierre Koffmann when he ran La Tante Claire.

I was greeted as if I had been there last week by the maitre’d Jean-Claude Breton who said how nice it was to see me again. Did he REALLY recognise me and if so how? I hadn't been for at least 10 years. My friend N had booked, not me. An impressive feat of memory if so. 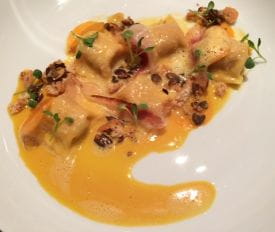 There’s the usual ushering to table, a stool on which to put your handbag (laughable in our case as our bags were so huge they topped off so we had to keep them on the floor) and a minion to escort you to the Ladies.

We were offered a glass of champagne in a hospitable way but were both sufficiently old hands to know that means at least an extra tenner on the bill (or £14 in GR’s case) so held our fire - also resisting the offer of a white truffle pasta special. The accompanying warm gougères we were given anyway were faultless

The menus are ordered on the prix fixe model. As N wanted to compare the restaurant to Troisgros to which she had recently been she went for the £95 one while I tried out the £55 lunch. Although the three starter and main course options bizarrely included four dishes that contained ham I think I got by far the better deal. 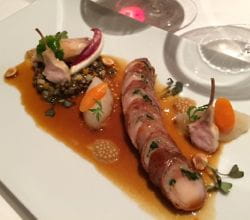 My starter of pumpkin agnolotti with Iberico ham, sage and amaretti biscuit (above) had a gorgeous roast pumpkin 'jus' ladled over it (there were a lot of sauces being ladled) - a really terrific dish. Roast rabbit loin - also with ham and salted baked turnips was beautifully presented, if a touch salty and a fresh dessert of roast pineapple with coconut parfait, coriander rum and lime sorbet just lovely. Like an upmarket pina colada.

N was less impressed by the vast sausage-shaped (I’m chosing my words with care) beetroot which was presented at table then dismembered and served with goats curd and a kaleidoscope of colourful blobs and swirls, a rather ordinary - and small - main course of turbot with clams and a fiddly carrot ‘cake’ with mead, bee pollen and cream cheese ice-cream that had us both longing for a big vulgar slice of the real thing. You can read her trenchant reaction (with some rather good pictures) on her blog The Food Judge. 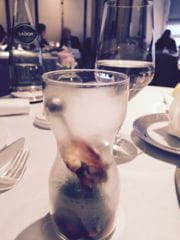 To do GR credit I certainly wasn’t short-changed on the amuses because I was having the cheapest menu. They were actually rather more exciting than N’s dishes: a deep fried chicken wing in a glass tube which billowed smoke and a fabulously sexy potato purée with smoked egg and truffles. Both would have been lovely with the champagne I suspect most there would have been drinking. There were also some pretty flashy petits fours which we were still offered despite the fact we didn’t order coffee or tea. Brownie points for that at least.

We had difficulty finding an affordable bottle from the very pricey wine list, eventually splashing out a half bottle of a lovely creamy 2010 Bernard Moreau Chassagne Montrachet (for £46) which was decanted and served at cellar temperature by the impressive young female sommelier. I topped up with a gorgeous glass of Ziereisen ‘Schulen’ spåtburgunder from Baden (£15) which proved perfect with the rabbit. 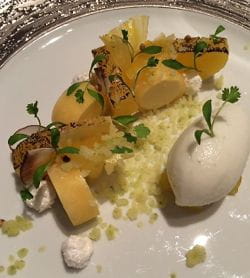 Overall though there just isn’t the wow factor you would expect from a restaurant that scores 10/10 - or from a 3 star. There aren’t enough dishes that leave you stunned with their invention and virtuosity. And no Gordon. Obviously. In fact it’s hard to see what role he plays in the restaurant. My guess he comes in for a menu tasting every so often and emails Clare with a dish he’s spotted somewhere - the talk when she got the GFG accolade was all about her not him. But a restaurant called Clare Smyth obviously wouldn’t pull in the punters the way the Ramsay brand does. Odd to say this of a Ramsay restaurant but it lacks personality.

The bill came to just over £250 for the two of us - I guess not excessive for a 3 star but we had been reasonably careful. You could easily clock up a bill twice that amount as I’m sure many people do. Worth it? Maybe if you've never been, maybe for lunch but despite the VIP treatment I'm in no hurry to go back.