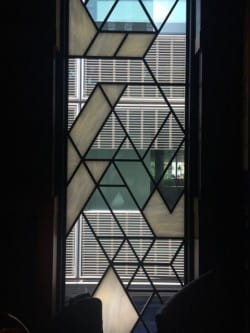 Then the bookings system showed there wasn’t a table available at the time I wanted to go. Then I RANG UP - you know, got on a phone like you did in the old days - and of course they had a table after all

Why did I make so much effort? Well the place is owned by restaurateur Alan Yau the creator of the then groundbreaking Hakkasan which has now cloned itself across the planet from Abu Dhabi to Las Vegas. Duck + Rice is his first project for a while, still offering the modern Chinese he’s famed for but (oddly) in a pubby setting.

You reach the dining room via a spiral staircase that you feel could be a bit lethal if you teeter down in your Alexander Wangs or overdo the cocktails but we made it without incident. 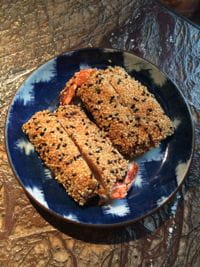 Daunted by the unusually large menu I phoned a friend who’d been recently but by the time she replied we’d already embarked on the prawn toasts which I’d remembered reading were particularly fine and a crispy duck salad which proved more interesting than it at first looked with generous nuggets of duck nestling (actually, they did nestle) under the leaves. The prawn toasts were sublime - shaped like a prawn, stuffed with fat juicy prawn meat, definitely an alpha plus prawn toast.

Bizarrely after that we switched back to dim sum. Very good prawn chueng fun with more fat chunks of prawn, good pork and prawn shu mai (that were a great match with the 1998 Savennières that was suggested by the glass) and rather dull vegetable spring rolls though why I expected them to be interesting I don’t know. They never are but at least they were well fried. 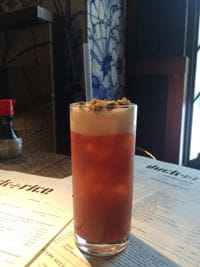 The drinks list is particularly interesting. I didn’t plan to drink so was urged to have the house special of chrysanthemum tea with honey which wasn't as exciting as it looks or sounded. But they have an amazing list of beers and an even better one of wines which are available in 70ml tasting measures so you can try different things. I ended up, urged by the sommelier Angelo, picking the Savennières and a really good Vespaiolo. Afterwards Angelo proudly showed me his Provintech dispensing system, a state-of-the-art wine-on-tap machine which is apparently the only one in London. Boys’ toys, eh?

The downside is that it’s a touch expensive. As Jay Rayner pointed out in his review - you can eat the same dishes much more cheaply elsewhere in Chinatown but you have to know the ropes and the service isn’t a fraction as friendly or obliging. Here they do that seemingly obligatory squatting thing by the table so they’re at the same level as you rather than towering over you. Never seems entirely genuine but who can object when they smile so sweetly? 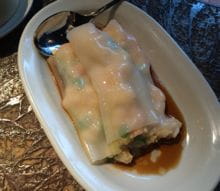 To return to the cost we didn’t eat or drink that much but effortlessly ratcheted up a bill of £60.30. You could easily find yourself with a much bigger one. I’d advise either going in for a single dish - of chow mein, say - if you're snatching a quick lunch or go in in a group of at least four so you can try lots of different dishes. Make sure you have at least one prawn toast to yourself though.

As we left the restaurant I realised I didn’t really get to grips with either of the signature duck dishes (the house duck on the next table* looked particularly good) Or the rice come to that. Or the beer snacks. Or the beer. I definitely need to go back.

*The weirdest thing was that the friend I’d tried to go to Duck + Rice with in the first place turned out to be sitting - I kid you not - on the next door table, it being her first visit since our abortive attempt. Spooky or what? Anyway she’s also a food blogger so you’ll be able to read her review soon too