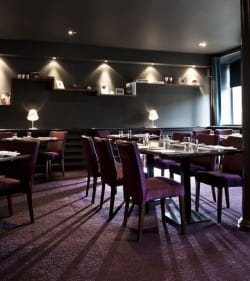 Certainly there are plenty of two star dishes on his ‘Land and Sea Surprise’ tasting menu including a shellfish broth of wonderful clarity and umami-rich depth of flavour, a terrine of octopus monkfish liver that cleverly mimicks foie gras and a precisely cooked ‘nose to tail’ dish of lamb including liver, kidney and testicles which has to be the best offal dish I’ve eaten. Was that what Michelin thought was inappropriate for a two star establishment? If not it has no balls.

Other dishes might not have reached such technical heights but were beautifully presented. A delicious ‘amuse’ of jellied chicken consommé, with discs of pressed chicken breast, crunchy apple and crisp bacon that would make a great full-size starter. An imaginative dish of razor clams (known locally as spoots) served with diced vegetables, a judicious touch of chorizo and lemon confit.

Tom’s signature dish of boned and rolled pig’s head and langoustine with a crispy ear salad (maybe the pork had slightly too powerful a flavour for the delicate langoustines if one were inclined to quibble). A dish of cod cheek with fresh Wye asparagus and a blood orange sauce that was bang in season. Dark sticky braised beef with ‘bone marrow’ potatoes (i.e. the ‘bone’ was made out of potato. Clever stuff.) 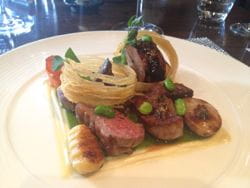 And two gorgeous desserts - a sharp yet creamy lemon meringue tart with frozen yoghurt and lemon confit and - my choice which I was reluctant to share - a light, airy rhubarb cheesecake with a rhubarb compote and rhubarb sorbet you may spot I’ve made my match of the week this week (with a Cabernet Franc ice wine)

Service too is impeccable even down to a fellow in the corner whose only job seemed to be sorting and polishing the appropriate cutlery for each order. And serving the pre-dessert and cheese. I wonder what his job title was. The cutler? The sorbeteer? The cheese somm? 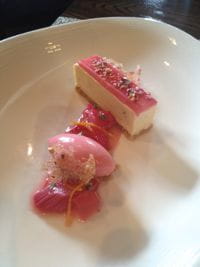 The wine list too is appropriately wide ranging and expensive though we were treated to the wine pairings - and a couple of beer pairings, including the Kelpie seaweed ale with the Shellfish Rockpool you’ll see in this Vine. It included some adventurous choices such as a sweet Coteaux du Layon with the monkfish liver terrine, a Western Australian riesling with the razor clams and a robust Etna Rosso with the pig’s head and langoustine dish though I felt some of the wines used (a heavily oaked New Zealand chardonnay and commercial New Zealand Sauvignon Blanc didn’t match the quality of the food). I’d order a bottle another time.

What else might Michelin object to? There’s an unglamourous view over a large depot on one side of the restaurant and the room is rather dark - probably better in the evening than the day. There’s the occasional misfiring dish - some overcooked poached monkfish and some really poor bread rolls that tasted as if they’d been reheated - a strange aberration in a restaurant of this quality.

But overall this is lovely, graceful food with a real sense of place made from top class ingredients and presented without excessive artifice by way of foams, smears and blobs. Not cheap but definitely worth the detour. Come on, Michelin - give it the credit it deserves.

Disclaimer: Tom Kitchin treated us to a number of free dishes and the wine pairings

this was one of my favourite restaurants in the UK (and I haven't been anywhere like it in France... the game dishes in the autumn were worth the journey alone). When I used to go there were unattractive grey blinds hiding the depot; perhaps Tom should go for trompe l'œuil. The wine list must have improved since I last went but I never got the impression anyone there really understood wine. We were charged £35 a bottle corkage back in 2008 when we badgered the manager to allow us to bring wine to match the quality of the food.